On a farm in O’Neill, Nebraska, Mike Zakrzewski wakes up every morning to tend his cattle and grow corn and soybeans on the farm he’s known since childhood. The youngest of nine children, he began farming with his dad in 1982, eventually buying the land from his parents and raising two children there with his wife. But due to climate change, this corner of Nebraska is not the same land he farmed with his father almost four decades ago.

“You see it firsthand on agriculture, because we’re working with nature every day,” said Zakrzewski. “Our growing seasons have extended and shifted a little bit. They’re a little later into the fall ... it’s the new norm to have wider extremes in weather — drier drys, wetter wets, windier winds.”

As in many communities around the world, these weather extremes are throwing a wrench into farmers' ability to make a living. The good news is Zakrzewski and many of his neighbors now have another source of income: the wind turbines on the horizon.

Representatives from a company called Midwest Wind Energy showed up in O’Neill in 2008, intrigued by wind maps showing that the area northeast of town has unusually high, consistent winds 100 meters up. This project eventually became the Grande Prairie Wind Farm, which has a capacity of 400 megawatts and now provides electricity to Omaha, Nebraska’s largest city. Producing enough wind energy to power 120,000 homes, this wind farm can help Omaha’s public electricity utility reach its goal of achieving net-zero carbon emissions by 2050.

The project was based on a simple idea: Landowners allow wind turbines on their property in return for annual payments from the company. Zakrzewski was among the first to sign up, motivated by the project’s climate benefits and the economic opportunity.

“As ag producers, we absolutely burn our share of fossil fuels, and we see firsthand what it’s doing,” Zakrzewski said. “And to have a supplemental income was a great appeal as well. It was win-win as far as I was concerned.”

Over the next 18 months, the project — which was taken over by Geronimo Energy and then Berkshire Hathaway Energy (BHE) — brought about 350 workers to construct 200 wind turbines in Holt County (where O’Neill is located), including 13 on Zakrzewski’s property. These workers added $7.7 million into the local economy by the time construction was finished, according to BHE Community Relations Manager Paulette Rush.

A new paper from WRI and the New Climate Economy takes a broad look at current and potential climate action in the United States, with a particular focus on renewable energy. The research found that clean electricity already provides twice as many U.S. jobs as fossil fuel electricity — and clean energy jobs are growing, particularly in rural areas.

In Nebraska, for example, rural clean energy jobs grew by 7.5% from 2015 to 2016, compared to zero growth in the state’s other rural jobs. Strong government investment would likely lead to even more job growth; public investments of $320 billion per year in clean energy and agriculture programs across the country could create 4.5 million additional jobs every year for 10 years.

In the O’Neill area, landowners hosting turbines collectively earn about $2 million a year in compensation for the company’s use of the land. The project also pays between $1.8 million and $2.2 million a year in local property taxes and set up a community fund that distributes $80,000 annually to local projects. In addition, it created 25 permanent jobs for maintenance technicians.

“These jobs are well above the county average in salary,” Zakrzewski said, “and allowed several young men and women the opportunity to return to Holt County for their careers.”

O’Neill isn’t the only place benefiting from new streams of income provided by wind energy. For example, in Jackson County, Minnesota — one of the state’s most active counties for wind farm development — wind farms generated 16% of the county’s 2017 operating revenue. This money is funding school districts and community development projects, improving the quality and accessibility of public resources.

According to the American Wind Energy Association, wind farms across the country paid $761 million in state and local taxes in 2018, plus $289 million in lease payments to farmers and other landowners who hosted wind turbines on their land.

With the Grande Prairie Wind Farm project complete, Zakrzewski is continuing work on his land as normal. Although fences surround the immediate area around each turbine, his cows can still graze in their shadow. In this way, wind farms are an easier sell for landowners than solar farms, which usually take up more land. 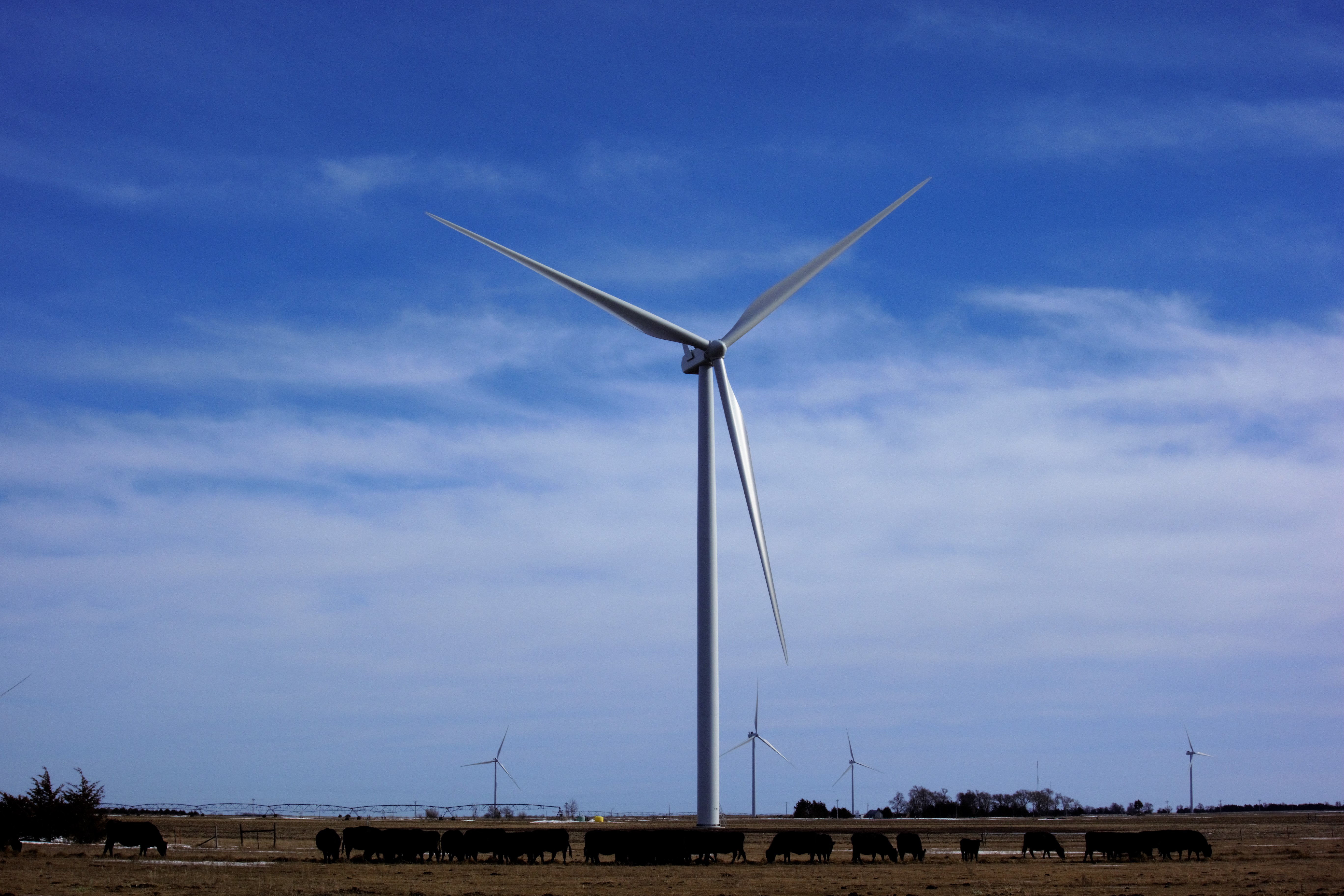 “The pasture I was in was swimming in 24-inch tall bluegrass, and you couldn’t see a weed in sight … It dawned on me that without these turbines, I would not have had the resources to prioritize improving the land and the entire operation … I now can afford to be a better steward of my land.”

Other U.S. farmers have similar experiences. One 2014 study found that Michigan landowners with wind turbines on their property invest twice as much money into their farms for things like home improvements, outbuildings and equipment compared to landowners who lived in townships without wind farms.

As chairman of the local landowners’ association, Zakrzewski played an important role as an unofficial ambassador for the wind project among his neighbors. In most cases, it wasn’t a hard sell.

“The facts and the economic numbers were on our side,” he said. “Honestly, that’s what sways them.”

Demand has only grown since the turbines went up: “Right now with the low commodity prices, [my neighbors] are just very, very happy that they are hosting turbines … in fact, people who were opposed at one level or another to a wind project have since approached me in this down farm economy saying, ‘Oh man, I wish I would have thought about this differently when we had the opportunity to sign up.’”

Investing in Wind Energy and Jobs

Between 2005 and 2017, 41 states and Washington, D.C. slashed their carbon emissions while growing their economies. Nebraska wasn't among those states; during the same period, its emissions actually grew 9%. More projects like this could help Nebraska and other states join the club, even as the ongoing COVID-19 pandemic poses new challenges.

Due to the current economic downturn, about 600,000 clean energy workers across the country lost their jobs in March and April. However, if the federal government provides the sector with appropriate support, it can achieve promising growth. Investing in clean energy infrastructure now will help keep climate change in check while providing much-needed employment, diversifying incomes and improving air quality. One immediate way to help would be to expand tax credits for renewable energy companies and make these credits easier to access.

In recent years, wind energy development met resistance from some rural communities across the United States, citing concerns over their appearance and potential impact on bird populations. However, a 2019 survey of wind farm neighbors across the country found that a majority had a positive attitude toward wind farms, with residents living close to turbines being more positive than people living farther away.

Wind energy won’t solve all problems for rural communities, but as its share in the U.S. electricity mix continues to grow — from 2.3% in 2010 to 7% in 2019 — it can be an important part of the solution for both clean energy and economic recovery. For those who are still skeptical about the benefits of wind energy, Zakrzewski has a message:

“Lately with the trend in national politics … it seems like people are a little more expressive on opposition to everything, including anything green,” he says. “And I would just encourage them to go visit someone who is hosting turbines to dispel all the myths that everyone has heard about them, because they’re very easy to live with.”

Learn how expanding renewable energy, investing in public transit, planting trees and other climate-friendly measures can help the U.S. build back better in WRI’s COVID-19 Expert Notes: Rebooting the U.S. Economy After COVID-19.