Countries pledged as part of the 2015 Paris Agreement to update their national climate plans (NDCs) every five years. This year is the first test of their intent to strengthen their commitments and reduce emissions enough to limit global temperature rise to 1.5-2 degrees C. This long-term vision cannot happen without setting ambitious climate plans now.

WRI’s NDC Tracker shows that 107 countries stated they will enhance their NDCs in 2020. Four countries — Republic of the Marshall Islands, Suriname, Norway and Republic of Moldova — submitted their plans already, leading the way for others.

Here are some key takeaways:

The Marshall Islands was the first country to submit an enhanced NDC, in November 2018, almost two years ahead of the UN climate summit in Glasgow (COP26) in December 2020. The NDC makes its previous target of reducing emissions 45% below 2010 levels by 2030 binding, while setting a new indicative target to reduce emissions at least 58% below 2010 levels by 2035. The NDC also reaffirms the Marshall Islands’ aspiration to achieve net-zero emissions by 2050.

While the country represents a tiny share of global emissions, it plays a leadership role in promoting international climate action, including through its prominent roles in the High Ambition Coalition and in the Climate Vulnerable Forum. Its efforts to curb emissions are particularly ambitious for a small island nation already experiencing irreversible changes that threaten its existence, when it could have simply focused on adaptation_._ In its electricity roadmap, the Marshall Islands emphasizes the importance of energy security and a reduction in its imports of fossil fuels. By 2025, the country aims to have its major grids able to run on “diesel-off” mode, using 100% renewable energy, during part at least part of the day.

In December 2019, Suriname became the second nation to submit a new NDC. The country accounts for 0.01% of global GHGs and is a carbon negative country — its forests absorb more GHG emissions than the country emits.

Suriname did not set a top-line emissions-reduction target, but instead focused on targets and measures in forests, power, agriculture and transport, sectors that represent 70% of the country’s emissions. Suriname plans to power 35% of its electricity grid with renewable energy in 2030, improve public transport, and tighten vehicle emissions by 2027 (the transportation sector was not included in the country’s last national climate plan.) The NDC also commits Suriname to expand protected areas for forests and wetlands to cover 17% of the country by 2030, up from the 14% specified in its previous NDC. Suriname also introduced a national land use planning system to limit emissions from agricultural land clearing and promote agricultural research.

Suriname’s greatest asset is its forests, which cover about 95% of the country. To take advantage of these forests and the ecosystem services they supply, Suriname is developing the world's first-ever financial market for natural assets, in partnership with the Inter-American Development Bank and a U.S. company called the Intrinsic Value Exchange.

Just like the Marshall Islands, Suriname’s submission of its 2020 NDC is a statement that a small, vulnerable country already endangered by the impacts of climate change is fully committed to doing its fair share in reducing emissions.

Norway took an important step in early February 2020 by setting a top-line target  to reduce emissions by at least 50%, and toward 55% below 1990 levels by 2030. Its previous NDC released five years ago only targeted a 40% reduction by 2030. The sectors covered in this economy-wide target are energy; industrial processes and product use; agriculture; land-use, land-use change and forestry; and waste. As the first developed country to announce a strengthened NDC, Norway is showing essential leadership. To help put the world on the emissions pathway we need, it will be essential for Norway to meet its 55% target.

Norway has long been a leader in the green economy, demonstrating that green growth is possible. Norway’s carbon price is one of the highest in the world, at almost $60 per tonne today. Since the carbon price was first implemented in 1991, Norway’s GDP has more than tripled. Norway is also a global leader in electric vehicle sales. Fully electric vehicles made up more than 40% of all car sales in the country in 2019, which can help spur its emissions reduction target.

While Norway’s NDC indicates that the country will fulfil its new target in cooperation with the European Union, it also gives itself some leeway: If the EU’s updated NDC does not match Norway’s enhanced level of ambition, Norway would make use of international carbon markets. The international rules governing how this would work are still to be established. This caveat may encourage the EU to submit a stronger NDC, but it may also allow Norway to take less domestic action to reduce emissions if it relies on buying emissions reductions abroad to achieve its targets.

This small central European country submitted its new climate plan in early March 2020. Though it represents less than 1% of global emissions, it has set a target to reduce its emissions 70% below 1990 levels by 2030, along with a conditional target of 88% if the country has access to low-cost finance and technology. Its previous target aimed for 64-67% reduction below 1990 levels by 2030. (These reductions targets in part reflect the significant fall in the country’s emissions after the collapse of the Soviet Union.)

Moldova’s national development strategy underlying its NDC, “Moldova 2030”, establishes a set of green economy principles to ensure economic resilience to climate change and to advance the country’s global competitiveness. Moldova plans to achieve its unconditional NDC with domestic actions that include the implementation of energy-efficient incentives and steering public investment to less emissions-intensive activities. For Moldova, investments in renewable energy can play an important role in helping to spur economic development because the country is highly dependent on energy imports, which represent 70% of its primary energy inputs and cost about 14% of its GDP.

Who Will Be Next?

Leading up to COP21 in 2015, countries submitted their NDCs throughout the year, as shown in the visual below. 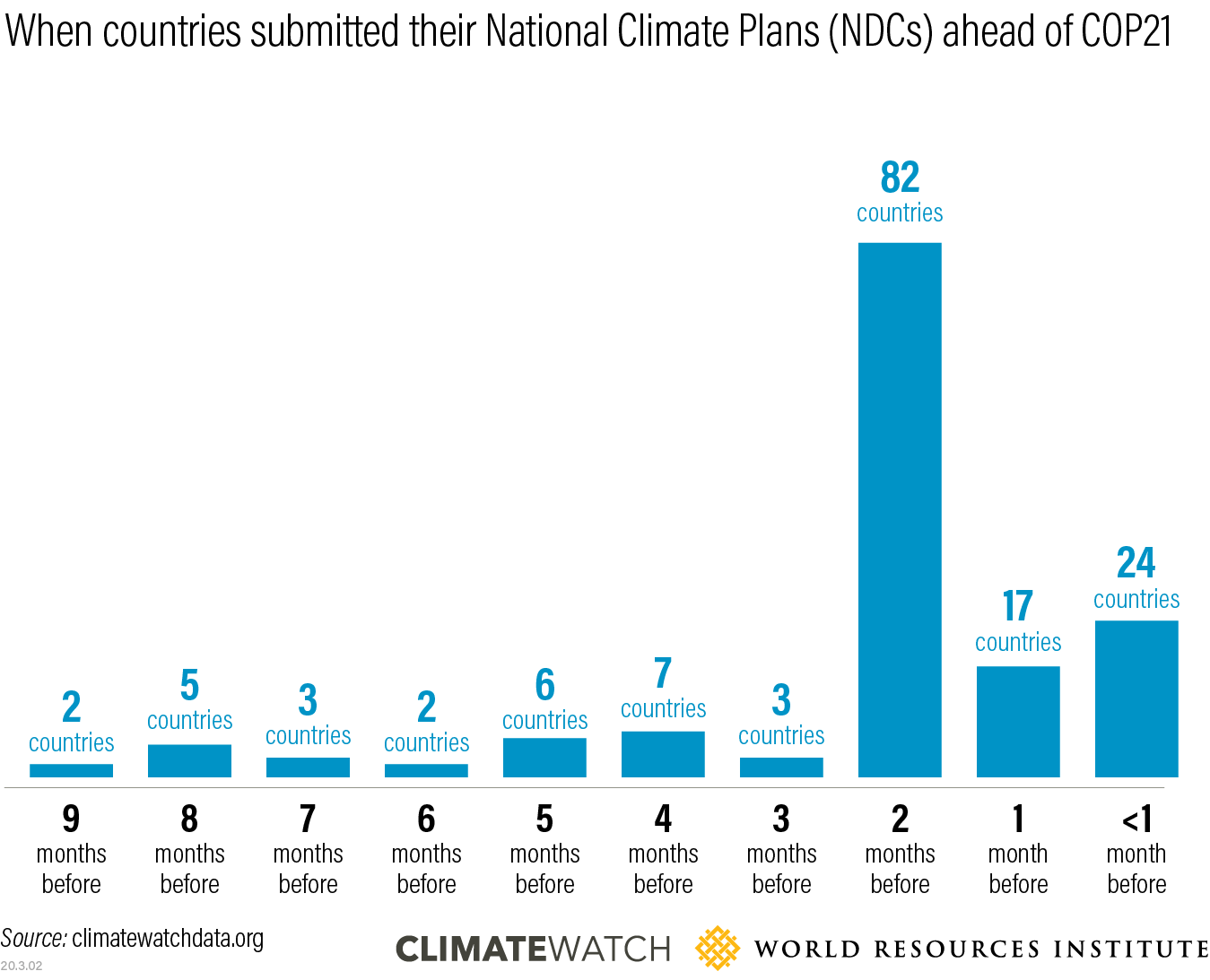 Political and economic landscapes have changed since the first NDCs were submitted in 2015, with new opportunities for climate action that seemed improbable even just five years ago. Climate solutions like renewable energy are cheaper and more accessible than ever before. There is a growing recognition that climate action is not a burden, but a serious opportunity for economic growth. Countries’ enhanced NDCs — especially those from major emitters — should reflect these changes by incorporating bold targets that put us on a path to limit global warming to 1.5 degrees C.

Just as they did in 2015, it is vital that countries submit their NDCs ahead of the UN climate conference (COP26). A synthesis report on the NDCs submitted will be released at COP26 in Glasgow in November 2020, assessing the collective progress toward the goals of the Paris Agreement. As countries put forward their plans in the coming months, the world will be watching to see if they align with the ambition that the climate crisis requires.