The United States is the only nation that doesn't show up in the list of countries currently committed to the Paris Agreement. But that doesn't mean most Americans aren't trying to do their part. In fact, U.S. states, cities and counties that support the Paris Agreement make up about two-thirds of the American population and economy. If these climate-forward actors were a country, they'd have the second largest economy in the world – larger than China and behind only the full United States. American businesses and banks are also broadly supportive of the Paris Agreement, and are preparing—with or without federal action—for a low-carbon economic transition. Why do they all support climate action? Because it makes both economic and environmental sense.

1. The U.S. can lower emissions while growing the economy.

Since 2005, U.S. real GDP has increased 25% while energy-related CO2 emissions have fallen 12%. Technological advancements and energy efficiency improvements are allowing the economy to grow even as energy consumption remains flat, which means that the energy consumed per dollar of GDP is falling. While much more is needed, this is proof that the U.S. can decouple growth and emissions.

2. It's now cheaper to generate electricity from renewables than fossil fuels in most cases.

The costs of solar panels, wind turbines and lithium batteries have fallen precipitously in recent years as their role in the U.S. energy mix has grown. Today, it would be cheaper to replace three-quarters of existing U.S. coal plants with wind and solar power than to keep them operating with coal. Natural gas plants, previously the cheapest option to replace retiring coal plants, are now being undercut by renewables in many locations. New research finds that 90% of proposed gas-fired power plants are more costly to build and operate than a clean energy portfolio of solar, wind, battery technology and demand management.

3. Electric vehicles, electric heat pumps and other climate-friendly consumer technologies are becoming cheaper and cleaner too.

As of today, gasoline costs $2.62 on average in the United States, while charging an electric vehicle for the equivalent amount of energy costs only $1.21. If current trends continue, electric vehicles are expected to be cost-competitive on an upfront basis with gasoline vehicles by 2024-2028 in the United States. The lifetime fuel and maintenance costs for an electric bus are about $400,000 less than a diesel bus, which is why many transit systems and schools are switching over. Electric heat pumps, which are better for the climate than traditional gas furnaces, are cost-effective for most new homes. The environmental advantage of electric vehicles and heat pumps will only increase as coal-fired power plants continue to be replaced by cleaner alternatives.

4. Clean energy jobs already employ about 3.5 million Americans and are poised to grow.

There are already 2.3 million Americans employed in energy efficiency, 600,000 in clean electricity and fuels, 255,000 in electric and alternative fuel vehicles, 485,000 in fuel-efficient vehicles, and 65,000 in battery storage. Clean energy is generally more labor-intensive and less capital-intensive than fossil fuels, so switching from fossil fuels to clean energy can create net jobs. A 2017 study found that $1 million spent on fossil fuels in the U.S. will generate 2-3 full-time equivalent jobs, while $1 million spent on renewable energy or energy efficiency will create 7-8 jobs. Furthermore, workers in the clean energy sector can earn higher and more equitable wages when compared to all workers nationally.

5. By innovating, engineering and manufacturing clean technologies, the U.S. can increase its competitiveness.

6. Energy efficiency standards save consumers money and boost the economy.

Investments in energy efficiency in buildings, transportation and industry all pay off several times over in energy cost savings. For example, the average American family saves $500 a year on utility bills due to federal efficiency standards for appliances, lighting, and plumbing – with the benefits outweighing the costs by 5 to 1. Existing energy standards are estimated to be responsible for about 300,000 jobs, which are expected to rise to 500,000 by 2030. Strengthening these standards would lead to even more consumer savings, economic benefits and jobs. 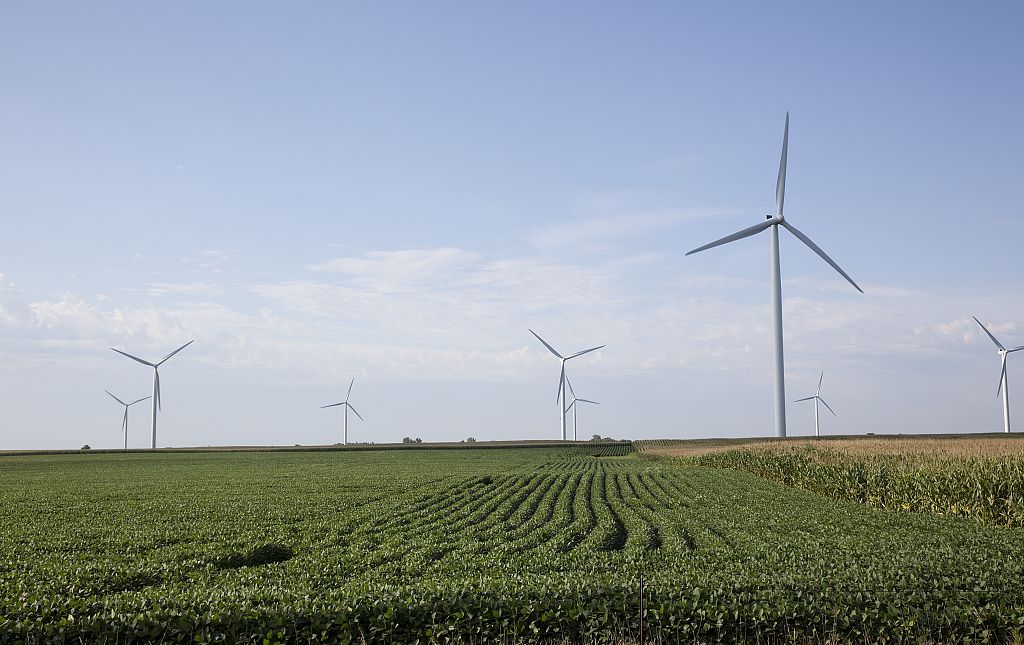 Energy efficiency can play an important role in lifting the high energy burden of rural households who often pay higher energy prices than urban areas. In rural communities, which have witnessed a roughly 40% net decline in farm incomes since 2011, wind energy taxes and royalties have introduced new revenue streams into the local economy; wind farms paid $761 million in 2018 state and local taxes, plus $289 million in lease payments to farmers and landowners who host wind turbines on their land. Policymakers and industry are also interested in the idea of paying farmers based on their adoption of regenerative agricultural practices that foster carbon sequestration. If widely adopted, this could further support rural economies. To date, there have been more than $320 billion in U.S. investments that focus on sustainable food and agriculture, with $47.5 billion explicitly targeting regenerative agriculture.

American commuters lose 7 billion hours and 3 billion gallons of fuel while stuck in traffic each year. By planning our cities so that people have options to live closer to where they work and play, with ready access to public transit for all, we can increase both economic and energy efficiency. A 10% increase in population density in US cities is associated with about a 5% increase in medium- and high-skilled wages as well as 2% lower carbon emissions per capita.

9. Carbon pricing has been an economic boon for the 10 states that have it in place.

After California implemented the nation's first cap-and-trade system in 2006, it's economy grew faster than the nation as a whole, and it met its 2020 emissions reduction target four years early in 2016. More than half of the revenue from the carbon price is being used to benefit disadvantaged communities. Nine northeastern states are part of the Regional Greenhouse Gas Initiative, a power sector cap-and-trade system launched in 2009, and three more plan to join. The proceeds from the initiative have used for energy efficiency and renewable energy projects, electricity consumer bill assistance, and education and job training programs. The initiative has been a net economic benefit for the participating states and has reduced deaths and illnesses from air pollution.

10. Without action, the US will face increasing costs of climate damages.

Extreme weather and climate disasters have already caused about $150 billion in damage per year over the past three years, a drastic increase from historical trends. The National Climate Assessment, a report by top U.S. experts from 13 federal agencies released in late 2018, shows that climate change is already affecting American communities now, and it will only get worse. It found that in a high emissions future, economic damages from extreme temperatures, rising seas, and other impacts of climate change would reach $500 billion per year in 2090. Reducing emissions, on the other hand, could cut those costs approximately in half to $280 billion per year.

In 2017, about 109,000 Americans died prematurely due to fine particulate matter and ozone pollution, and more than 40% of Americans live in counties that have experienced unhealthy pollution in recent years. If the U.S. reduced emissions in a way consistent with the Paris Agreement, it could reduce premature deaths from air pollution by about 30% in the next decade.

12. Smart and properly designed climate policies can build a more inclusive and prosperous economy for all.

Inequality is one of the greatest challenges facing America, and is very likely to be exacerbated by climate change.The impacts of climate change will be disproportionately felt by poor and marginalized communities. Choosing low-carbon options would not only improve public health, create jobs and cut energy bills, but many of the gains would be mostly enjoyed by low-income communities. Those most vulnerable to climate change are therefore also those who would benefit most from climate action. In addition, supportive policies can ensure that the low-carbon transition is equitable for communities formerly dependent on fossil fuels. For example, congressional investments in coal communities in 13 Appalachian states through the POWER initiative are projected to create or retain more than 23,000 jobs and leverage more than $811 million in additional private investment into Appalachia's economy.

These 12 reasons are a compelling argument for the Congress and the Executive Branch to put in place strong new federal policies in support of climate action. The federal government needs to catch up with the leading U.S. states and other countries around the world to take advantage of the benefits of the low-carbon economy.