In April 2019, in the heart of coal country, Indiana regulators rejected a proposal by its electric and gas utility, Vectren, to replace baseload coal plants with a new $900 million, 850 megawatt (MW) natural gas-fired power plant. Regulators were concerned that with the dramatic decline in the cost of renewable energy, maturation of energy storage and rapidly changing customer demand, such a major gas plant investment could become a stranded, uneconomic asset in the future. Regulators are now pushing Vectren to consider more decentralized, lower-carbon resources such as wind, solar and storage that would offer greater resource diversity, flexibility and cost effectiveness.

This decision is notable in a state where coal is still the primary energy fuel. At the same time, the Indiana decision hints at a broader transformation happening across the United States.

Coal, the long-reigning king of the U.S. power sector, was officially dethroned by cheap, abundant natural gas in 2016. In 2018, natural gas fueled more than 60 percent of newly installed electric-generating capacity and accounted for 35 percent of total U.S. electricity generation. 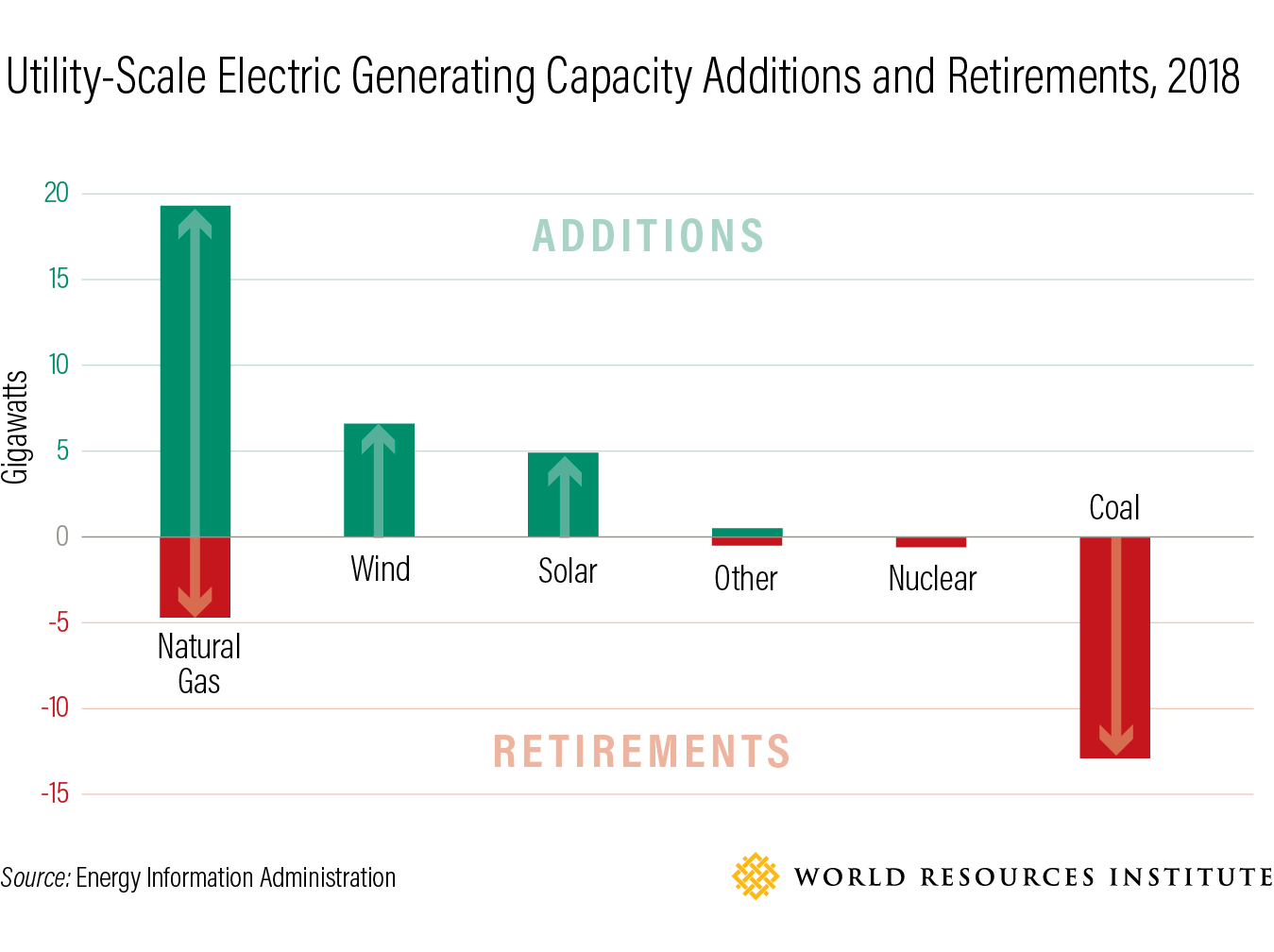 But that may be about to change. Natural gas faces intensifying pressure from wind and solar power combined with storage technologies. Renewable energy resources such as solar and wind are expected to be the fastest growing source of electricity generation, outpacing gas for at least the next two years. Electricity generation from utility-scale solar is expected to grow by 17 percent in 2020 and that from wind by 14 percent during the next two years

Utility regulators from a range of states have begun to question continued investments in new natural gas generation, instead turning to low cost wind and solar. Here are five examples from U.S. states:

Earlier this year, the Arizona Corporation Commission placed a moratorium on new gas plants 150 megawatts (MW) or larger through August 1 of this year. In the meantime, the state is considering an energy modernization plan for utilities to source 80% of their electricity from renewables and nuclear by 2050. The plan also involves deployment of 3,000 MW of energy storage by 2030, to help provide peak power as an alternative to gas plants that can provide extra power during peak demand periods.

Last year Arizona regulators also declined to recognize the 15-year IRP filed by the state's investor-owned utilities for their disproportionate reliance on massive gas plants, to the exclusion of more renewable energy.

Natural gas-fired power plants accounted for approximately half of California's in-state power in 2016, but new gas construction is becoming a rarity as market and policy headwinds intensify. The state is pushing its utilities to replace natural gas power plants with renewables and other resources. Recently, Southern California Edison (SCE) selected a portfolio of battery plants totaling 195 MW, instead of a 262 MW gas "peaker" plant (plants that kick in with additional power when demand for energy is especially high) it had chosen previously. In addition, Los Angeles decided to shutter three gas-fired coastal power plants over the next decade; the city will instead invest in renewable energy. California is expecting to retire more gas plants in the coming years—1,380 MW of gas power plant capacity to be retired in 2019 and another 4,600 MW in 2020—and they are more likely to be replaced by renewables and storage.

Colorado's biggest utility, Xcel Energy, announced last year that it would replace 660 MW of coal-fired generation with the biggest package of renewable energy projects ever proposed in the country for an individual coal plant retirement—more than 1,800 MW of wind, solar and battery storage. Xcel estimates the transition will save ratepayers between $213 million and $374 million. While Xcel's plan includes the purchase of existing gas plants, it proposes no new gas construction. Xcel has also announced plans to go entirely carbon-free by 2050.

In a sign that the transition to a clean energy future is taking place outside of its traditional borders, Virginia regulators rebuked Dominion Energy for overestimating projections of future electricity demand and failing to take into account a number of electricity resources that would lower costs for consumers or are mandated by law.For the first time ever, Dominion's integrated resource plan (IRP)—an outline of a utility's resource needs, filed with public utility commissions—was rejected for failing to consider the impacts of energy legislation passed last year. That legislation will significantly increase Virginia's renewable capacity and mandates Dominion spend $870 million on energy efficiency. Regulators noted there was "considerable doubt regarding the accuracy and reasonableness of the Company's load forecast," which could lead to overinvestment in natural gas infrastructure.

Why Are Regulators Turning Away from Natural Gas? Economics.

What explains this growing shift where regulators and utilities look more toward solar, wind and battery storage than natural gas, as they phase out coal generation?

Part of it is that state policymakers are adopting policies that support the build-out of renewable energy, such as through standards that require utilities to obtain a certain portion of their electricity from zero-emission sources (e.g. renewable portfolio standards) or standalone mandates requiring investor-owned utilities to procure significant amounts of storage. New York, for instance, has set an energy storage goal of 3,000 MW by 2030 and the New York Public Service Commission has called upon the state's six investor-owned utilities to conduct competitive solicitations to have a total of 350 MW of energy storage resources in service by end of 2022. California, Massachusetts, and New Jersey are a few other states that have established energy storage targets.

However, the new economics of renewables are a significant factor behind this trend—especially in states that are still heavily fossil fuel-dependent. Renewable energy is now undercutting the cost of new natural gas generation in a growing number of regions. According to Lazard, a financial advisory firm, the levelized cost of energy (LCOE) for some renewables, especially onshore wind and utility-scale solar, is lower than the cheapest natural gas in many cases, even without subsidies factored in. 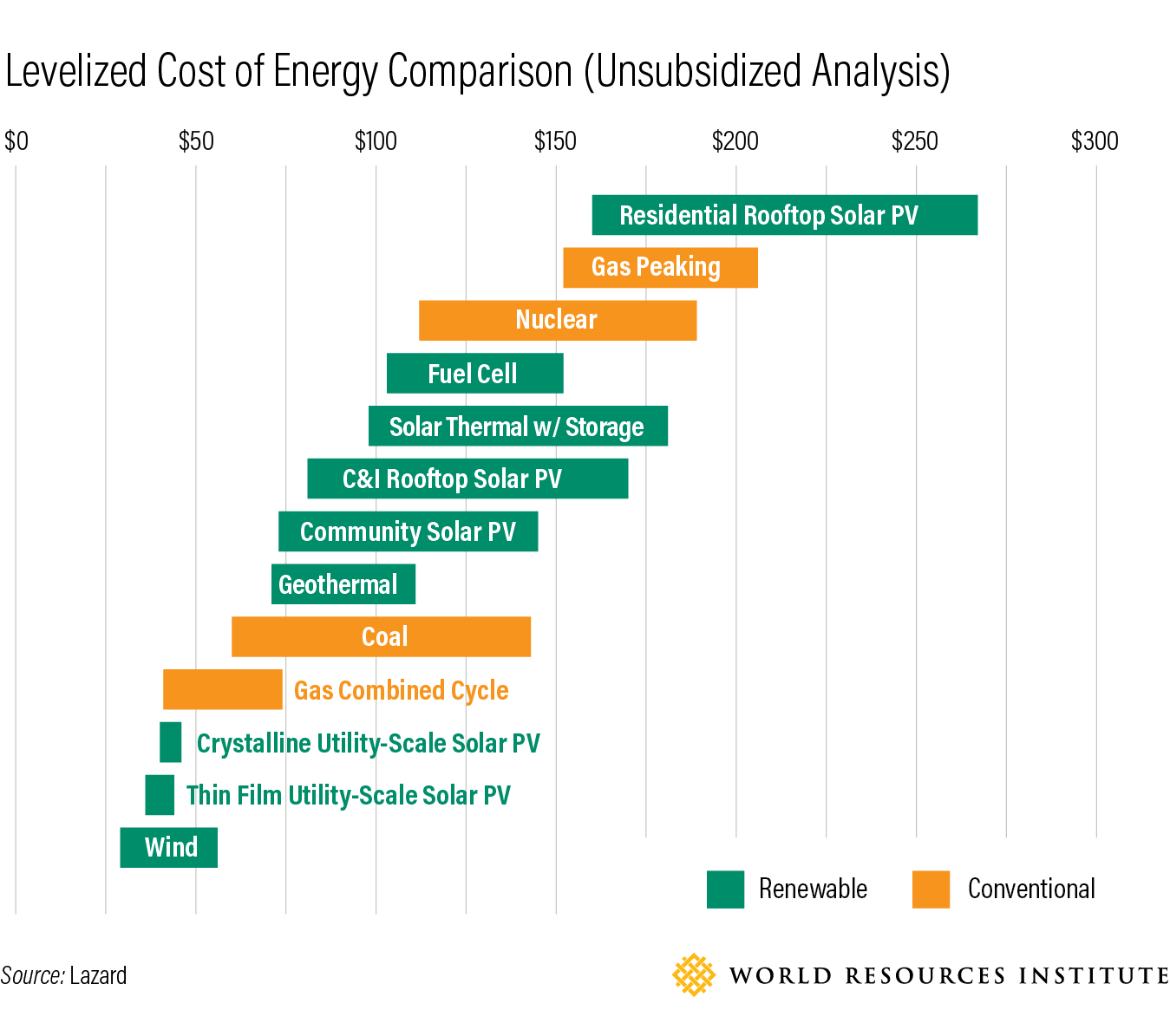 LCOE—measuring the average cost of electricity over the life of a project—is one commonly used metric to compare the costs of different generation technologies. As IRENA has noted, however, "LCOE is a useful metric as a starting point for deeper comparison, it is not necessarily the most useful indicator of cost between different power generation technologies." The Lazard analysis also presents various caveats on the use of LCOE, e.g., it does not reflect various integration costs or potential social and environmental externalities. Research has shown that incremental system costs from adding non-dispatchable renewable generation are minimal up to penetration rates of 80 percent or more as long as appropriate investments are made in transmission and storage. Given that renewables produce no CO2 emissions or other air pollutants, and that the current integration costs of renewables are low, one can be confident that renewables will be a low-cost incremental source of generation for years to come.

Recent data on power purchase agreements show consistency with Lazard's LCOE estimates. In June 2018, NV Energy set a new price record when it entered into a 300 MW power purchase agreement (PPA) with the Eagle Shadow Mountain solar project at $23.76/MWh for 25 years. The PPA was approved by Nevada regulators in December 2018. Last year Xcel Energy's all-source solicitation received a batch of bids whose medians were $18.10/MWh for a wind project, $21/MWh for wind plus storage, $29.50/MWh for solar, and $36/MWh for solar plus storage. While the cost of renewable and storage varies from market to market, these two examples show that the costs are dropping rapidly and the business case for using renewables in place of natural gas is becoming more compelling in many parts of the country.

Renewables hold another price advantage over natural gas. Renewable energy costs are expected to continue falling, while the cost of gas generation can be volatile since it is tethered to the commodity price of natural gas. In the last 10 years alone, natural gas hit a high of almost $7 per mmBtus and a low of $1.75. (It is currently at $2.65.) Renewable energy costs, on the other hand, are forecasted to get cheaper in the coming years (removal of federal tax incentives may cause modest increases in the near term). Bloomberg New Energy Finance, in its New Energy Outlook 2019, reported that wind and solar are now cheapest across more than two-thirds of the world and that by 2030 they will "undercut commissioned coal and gas almost everywhere." Wood Mackenzie Power & Renewables expects battery prices to fall by more than 80 percent by 2040. Energy storage deployment is forecasted to grow thirteenfold, from a 12 gigawatt-hour market in 2018 to a 158 gigawatt-hour market in 2024, with much of the growth concentrated in the United States and China.

Finally, investing in new gas plants is beginning to be seen as a risky proposition due to climate change concerns. In addition to concerns about methane leakage in natural gas production, building natural gas infrastructure—which has a relatively long lifespan—for the next three decades is beginning to be viewed as in tension with current climate goals. Limiting global warming to 1.5 degrees C (2.7 degrees F) above preindustrial levels, which scientists say is necessary for preventing the worst impacts of climate change, requires the United States to achieve carbon neutrality by midcentury. This is only possible if power sector emissions fall close to zero. This means that much of the planned and existing oil and gas infrastructure will have to be abandoned before the end of its life or retrofitted to include carbon capture and storage. Thus it risks becoming what investors call a "stranded asset." While it is hard to predict what policymakers will do in the future, if a price is put on carbon in the next few years, natural gas's future could become cloudier.

A report from the Rocky Mountain Institute echoes this concern. In comparing the cost of four proposed gas plants in different parts of the country with regionally appropriate aggregations of renewable energy resources, the analysis finds that, in three of the four cases, the clean energy portfolio would cost 8-60 percent less than the four proposed gas plants today. With further cost reductions in clean energy and/or a modest $7.50 per ton price on carbon emissions, renewables will be cheaper in all four cases.

Natural gas will play a significant role in the nation's future electricity mix in the coming years. The mix of energy sources used for generating electricity will continue to shift in response to changes in fuel costs and the development of renewable energy technologies. In parts of the country where natural gas is the most cost-effective energy source to replace coal-fired generation, pure economics and local grid context will dictate utility and energy regulator decisions to invest in new natural gas-fired generation. However, as this blog notes, a natural gas-centered energy transition would carry significant economic and environmental risks.

For years, natural gas has been viewed as a "bridge fuel,' a cleaner burning, low-cost alternative to coal while zero-emission options are developed. And indeed, the transition from coal to natural gas has conferred significant benefits in terms of reducing GHG emissions and air pollution. But with renewables quickly catching up to natural gas, could it be that we're getting to the end of the natural gas bridge and approaching the other side?