In 2015, 184 countries submitted national climate commitments, known under the Paris Agreement as nationally determined contributions (NDCs). That first round fell on a spectrum ranging from transformative aspirations to lackluster regurgitations of existing approaches. The current NDCs will not limit warming to 1.5 degrees C, the target scientists say is necessary for preventing the worst climate impacts.

However, the first round of NDCs was never intended to solve climate change in one fell swoop. That is why the Paris Agreement calls on countries to ratchet up national climate action every five years. The Paris conference specifically requested that countries come forward with new or updated NDCs by the end of 2020.

Unless NDCs go further, faster, climate action will lag behind what is scientifically necessary to avoid the worst impacts of warming. 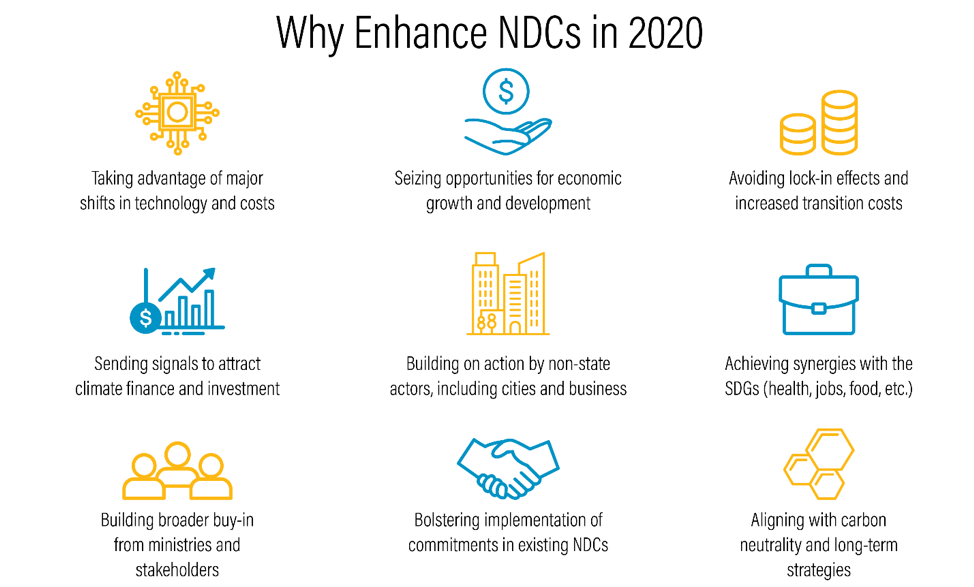 Who Will Step Up?

Some countries are already making clear that they plan to strengthen their commitments under the Paris Agreement. WRI just launched the 2020 NDC Tracker so anyone can see which countries have confirmed they will update or enhance their NDCs by 2020. “Update” could include the provision of more transparent data and information, while “enhance” could mean pledging to reduce more emissions or taking additional measures to boost resilience to climate impacts.

To date, nine countries have clearly stated their intention to make updates, while an additional 23 intend to go further by enhancing the mitigation ambition or other action in their NDCs by 2020. Other countries also appear ready to do so but haven’t stated that publicly.

Many of the countries that have thus far indicated they intend to enhance their NDCs are smaller and more vulnerable countries. While they are among the smallest contributors to the climate crisis, they recognize the direct threat it poses and are ready to take significant steps to cut emissions and build resilience.

During the U.N. Climate Action Summit next week, we expect that additional countries will make their intentions clear. As we head into next year, it will be vital that major emitters lead the way in significantly curtailing emissions by 2030.

WRI and UNDP also have new guidance to walk countries through a step-by-step process to identify relevant options for enhancing NDCs. The guidance will help countries leverage enhanced NDCs to reduce emissions, advance adaptation action and transparently communicate these efforts. It also presents examples and lessons from countries that are already taking these steps. Finally, the guidance explains how to maximize synergies between climate action with the Sustainable Development Goals, align finance with NDC objectives, and communicate NDCs transparently and in line with the Paris Agreement.

The new guidance helps countries identify the growing number of options to step up climate action. Many of these options also advance economic and sustainable development. For example, the cost of solar photovoltaics and lithium-ion batteries have plummeted in recent years, bringing affordable and reliable electricity to rural and urban residents alike and opening up new markets for electric cars and trucks.

These new developments are in addition to climate solutions that have long been on the table, but weren’t fully utilized in the first round of NDCs, such as promoting public transit to reduce transportation emissions, and improving agricultural practices and restoring forests to address climate change. Analysis shows that implementing ambitious climate solutions like these could deliver $26 trillion in economic benefits through 2030.

Over the coming months, WRI, UNDP and other partners will launch additional guidance to help countries identify opportunities to enhance NDCs in specific sectors, including power, transport, forests and agriculture.

Time for the World’s Largest Emitters to Step Up

Next week’s summit is meant to kick things off and send a signal to investors, mayors, CEOs and the broader public that bolder climate action is on the horizon. Countries will arrive at the UN Climate Action Summit with a wide range of opportunities to enhance ambition in ways that also promote economic growth and development. Leaders of many small nations are already showing the way forward, but to deliver the transformative action that the climate crisis requires, the world’s largest emitters must quickly follow suit.