Costa Rica has some 43,000 coffee farmers. According to the Ministry of Agriculture, coffee production in the southern region of Coto Brus, where farmers' situation is particularly worrying, has fallen by 50% in the last 15 years as a result of changing economics and climate.

Most of the 4,000 coffee farmers in the district produce on less than five hectares each, and the local economy — as well as thousands of seasonal workers from Panama's Ngäbe-Buglé indigenous communities — depend on coffee as their primary source of income. But Coffea arabica's sensitivity to changes in temperature, rainfall, pests and disease place it at great risk. Farmers are already experiencing climate change impacts, like the spread of fungal diseases among their crops and erratic flowering cycles.

Climate impacts aren't the only threat farmers face. In Costa Rica, Colombia, Guatemala and elsewhere, declining global prices are making it harder for smallholder coffee farmers to stay in business. As demand for coffee has grown, driven by Asian markets, production is expanding — often in places where labor and agricultural inputs are cheaper. Producers outside Costa Rica are also growing more of the less costly, lower-quality coffee variety robusta. In August 2018, the price per pound of coffee dropped below $1, which, for most farmers around the world, is not enough to break even. While this recent drop was particularly severe, variability in the coffee market is not new and consistently harms farmers more than others in the supply chain.

With the added pressure of climate change, incremental measures to adapt are not enough. A small group of entrepreneurial farmers in Coto Brus are working hard to find new solutions to safeguard their future — and they're transforming what it means to be a coffee farmer in this new era.

"It's important to safeguard the essence of being coffee producers, but also be capable of sitting at a business table," says Armando Navarro, a 44-year-old farmer in Coto Brus. 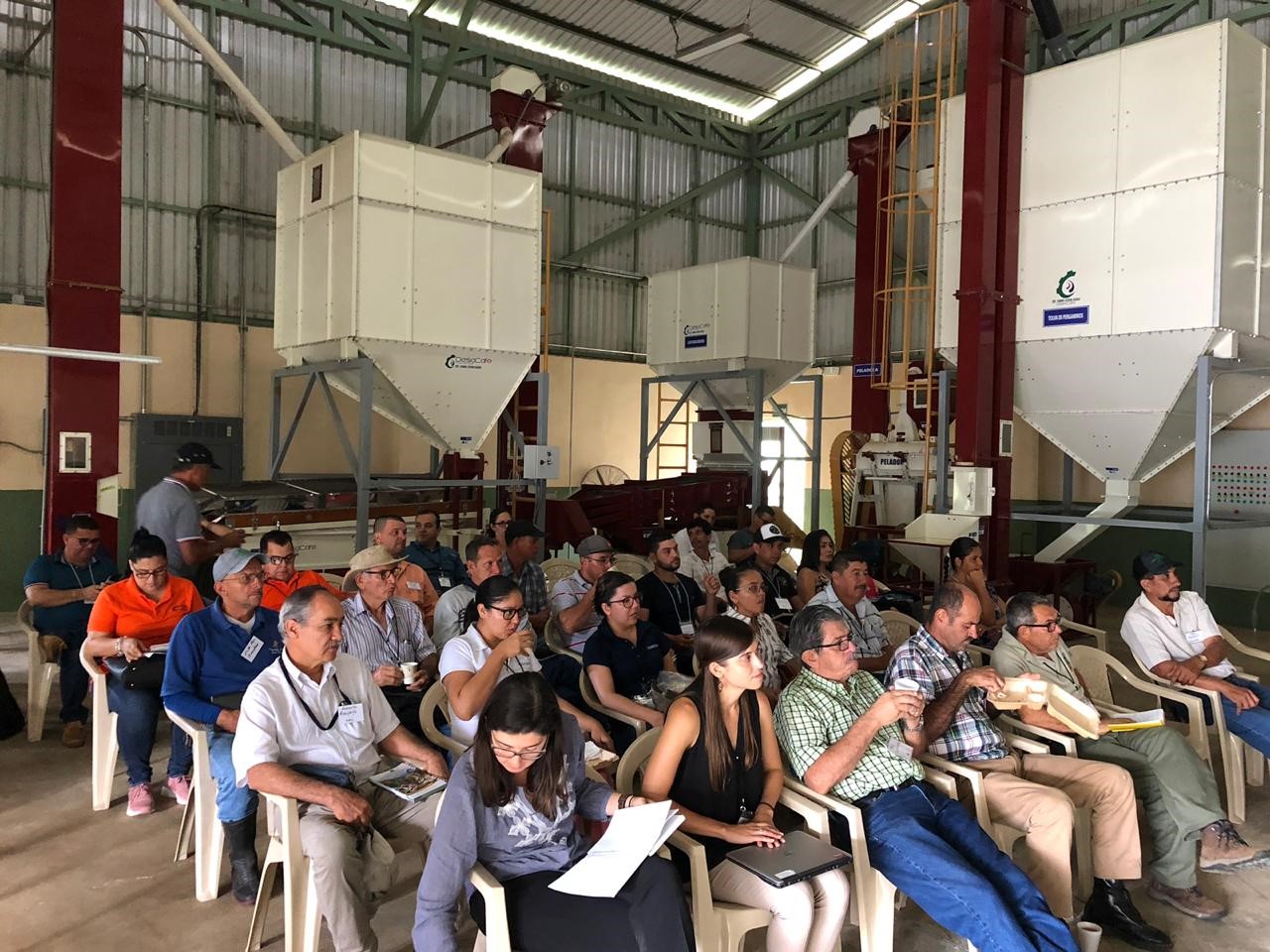 Navarro leads a group of 10 farmers, called Exportaciones Aromas Coffee, who stand out for their entrepreneurship and innovation. Brought together by their common enthusiasm for finding new solutions to the threats facing coffee farming, the farmers formed an association five years ago. They are leveraging their platform to go where few coffee farmers in Coto Brus have gone before, and forming novel alliances with government and private companies. Among their accomplishments are a public-private project to build a local coffee processing plant, access to wholesale prices for farm inputs like fertilizers, a certification program for farms with good social and environmental practices, and mutually beneficial corporate partnerships.

Collectively negotiating with suppliers for production inputs like fertilizer helps keep farmers' costs down. As coffee prices drop globally, managing the costs of production on farms is essential to staying in business.

Modernizing and Commercializing in the Green Hills of Coto Brus

There is growing recognition among some coffee farmers in Coto Brus that the traditional model of production (in which a farmer takes his or her harvest to the local coffee cooperative or processor, and does not participate in the processing or marketing) is no longer profitable for many producers amid dropping international coffee prices. During a recent climate adaptation workshop, organized by WRI and the Ministry of Agriculture, an emerging modernization trend garnered interest and attention as an important adaptation measure.

The farmers of Exportaciones Aromas Coffee know that to stay in coffee, commercialization is key. That means communicating directly to exporters, buyers and consumers the added value of high-quality coffee, introducing sustainable environmental and social practices, and ensuring the traceability of each farmer's product.

The farmers' partnership with the coffee exporting company Cafinter has helped them introduce drip irrigation to save water and to try out new coffee varieties with special qualities like greater climate resilience or in-demand flavor profiles. 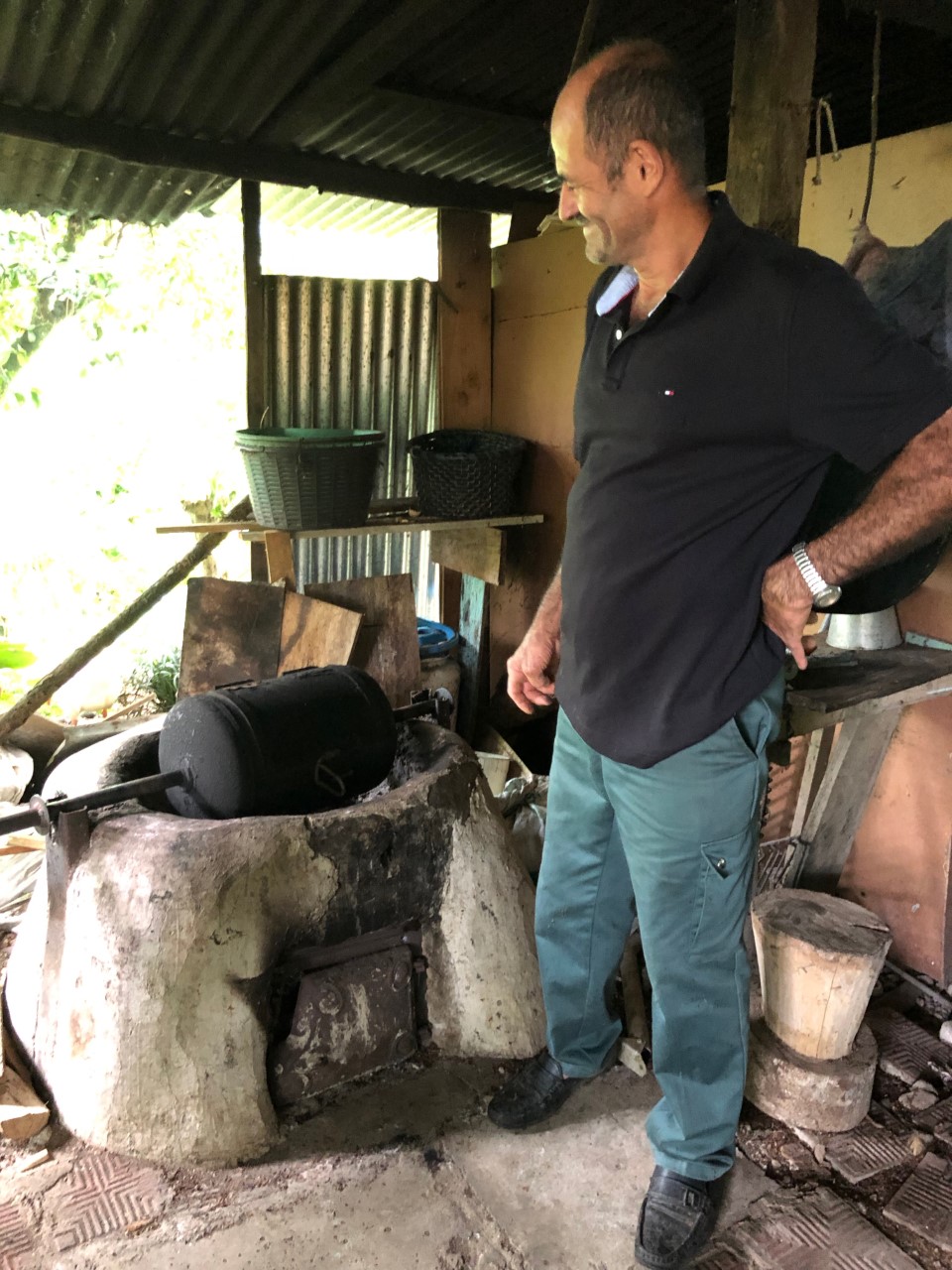 Farmer Don Roberto Jiménez now dries, roasts and exports some of his coffee beans himself, with machinery he invented. Photo by Stefanie Tye

Their new processing plant, the first of its kind run by a small, independent group in Costa Rica, is a perfect embodiment of the transformations brewing in Coto Brus. The plant allows each farmer to process his or her coffee separately, send samples to exporters, and negotiate directly with buyers. Tracing batches of coffee back to individual farms, and eliminating middlemen, allows farmers to get higher prices based on the quality of their coffee and on their individual sustainable practices.

"I love my farm," shared 31-year-old farmer and collective member Lainekel Zamora. "It's very noble. What needs to be done is to adapt oneself, see what the best options are for production and commercialization. The idea is to export finished products with traceability, and that a consumer in Japan can see through a link on their phone where that coffee came from, for them to learn about its environmental and social impact."

This added income security helps increase farmers' resilience to climate change impacts, which can damage crops and further eat into profits. For these farmers, improving profitability and building an economic buffer for hard times — whether from increasingly unpredictable rainfall, temperature extremes or the spread of pests — is essential. 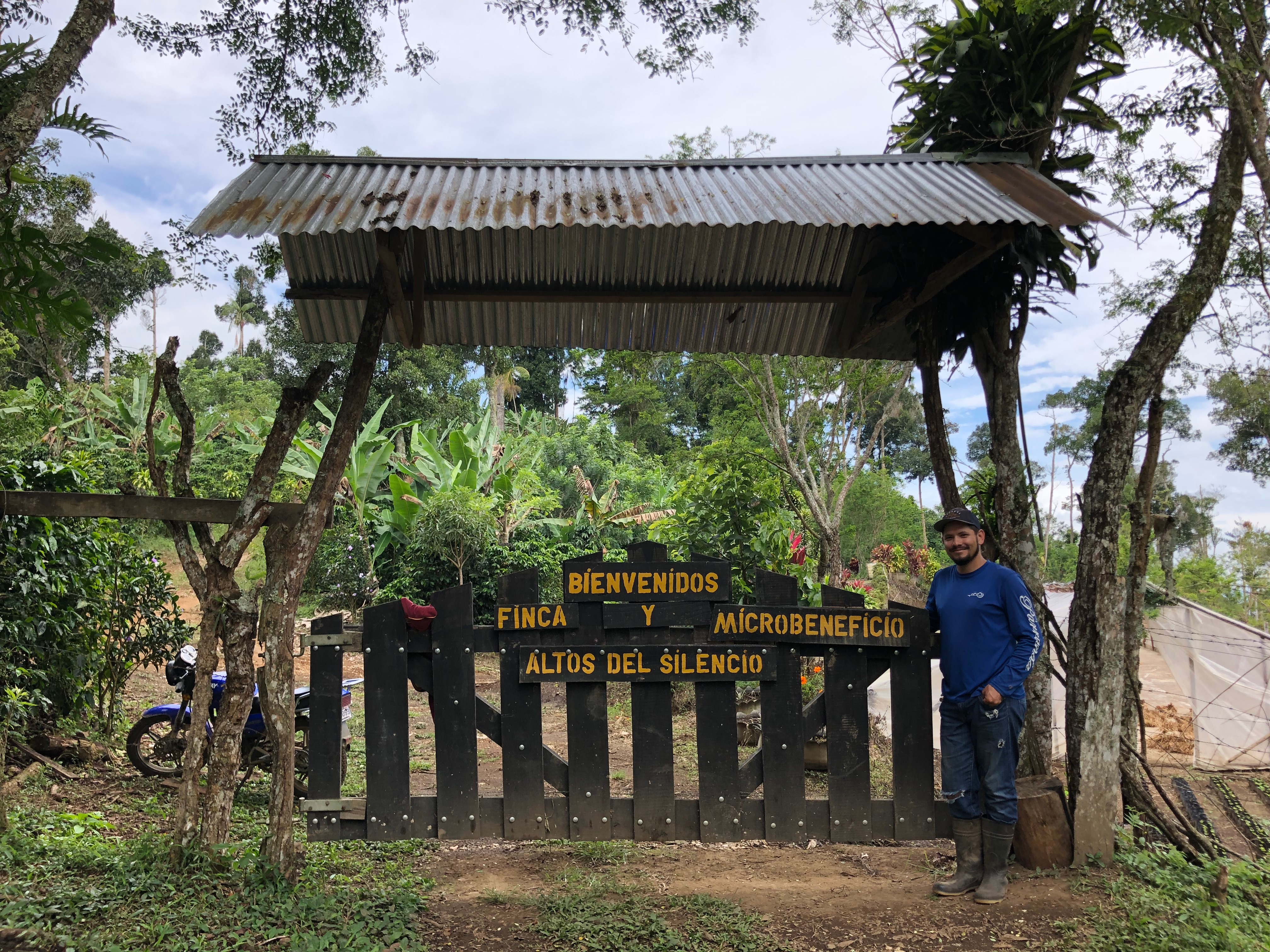 Don Lainekel Zamora Gómez at the entrance to his coffee farm. Coffee is an important part of the economy in Coto Brus, Costa Rica. Photo by Stefanie Tye

Many in Costa Rica share an apprehension that traditional coffee farming is no longer viable. Youth are largely abandoning coffee farming and rural communities are seeing an exodus to cities. The Coto Brus farmers' novel practices are a concerted effort to adapt coffee cultivation to new circumstances and create business models that will sustain farming families and communities even in an uncertain future.

Improving the profitability of their farms isn't the only driver. Members of Exportaciones Aromas Coffee and other farmers in the district frequently talk about social and environmental reasons for sustainable practices. Several farmers in the district have certified their farms through a national program called Programa Bandera Azúl Ecológica. The program encourages to grow coffee under the shade of a variety of trees (to improve biodiversity, prevent erosion, fix nitrogen and protect water sources), use soil analyses to customize fertilizer inputs and protect soil, recycle the waste generated on their farms, and more.

Among rows of shade-grown coffee, Zamora explains, "There are many people who depend on my decisions for the farm. The indigenous communities depend a great deal on this economy. It's not just about my family. You have to be conscious and think about social responsibility. At the end of the day, we want to add our little grain of sand to leave this world better than we found it."

Groups like Exportaciones Aromas Coffee wouldn't be so successful without the capacity-building, resources and access to key institutions that Costa Rica offers. At the climate adaptation workshop, which took place in the group's new processing plant, farmers described the many players involved in Costa Rica's coffee sector. From finance institutions to coffee researchers, and from NGOs to agronomists and government planners, the support available is an immense asset for farmers stepping onto new production pathways. The Institute for Rural Development, the Costa Rican Development Bank, and Fundecooperación, for example, provide farmers with grants and low-credit loans. The National Coffee Institute (ICAFE) provides low-cost coffee seedlings, early warning alerts for pests and disease, and tests new coffee varieties in the field. The Ministry of Agriculture, with its extension agents across the country, carries out invaluable trainings and technical assistance to farmers. 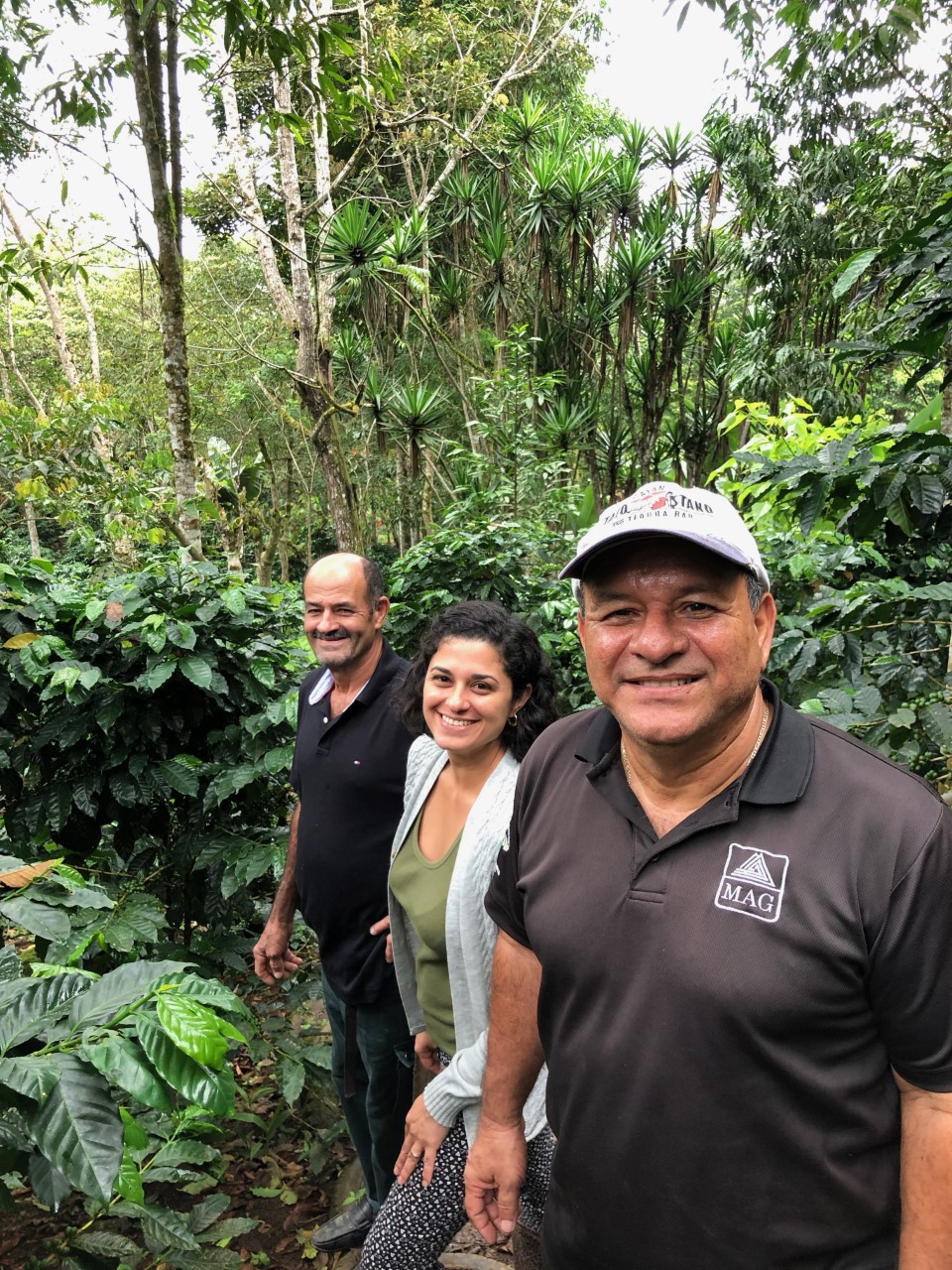 In the face of climate change and other challenges, working together across government, business and civil society is crucial. Collaboration can provide space for innovation and entrepreneurship, and allow both newer and older generations to thrive.

"It's not clear to us what is going to happen in 2030," Navarro said. "The best we can do is continue with good practices: adopt new [coffee] varieties, take action in the area of conservation. There are many things that can be done and that's what we're doing."

WRI's research in Costa Rica's coffee sector and the recent workshop were made possible through support from Germany's Federal Ministry of Economic Cooperation and Development (BMZ).

EDITOR’S NOTE, 9/26/19: A previous version of this blog stated that the coffee farmers' association in Coto Brus has 16 members and is called Centro Agrícola Cantonal. We have corrected the blog to indicate that the group has 10 formal members (as of September 2019), and is called Exportaciones Aromas Coffee. We regret the error.