Canada has just announced its proposed plans for post-2020 climate action, aiming to reduce greenhouse gas (GHG) emissions by 30 percent below 2005 levels by 2030. It is the tenth country to formally submit its INDC (Intended Nationally Determined Contribution) to the United Nations. Other major developed countries, including the European Union (40 percent below 1990 levels by 2030) and the United States (26 to 28 percent below 2005 levels by 2025) have previously announced their proposed mitigation goals. Unfortunately, Canada’s level of mitigation would put it —the world’s ninth largest emitter —noticeably behind its peers in terms of how fast it aims to decarbonize in the post-2020 period.

Scientists tell us we need to phase out emissions entirely by later this century, and developed countries – including Canada, the EU and the United States – promised more than two decades ago to take the lead in addressing climate change. The annual rate of economy-wide emissions reductions from 2020-2030 implied by the INDCs can provide valuable insight into how ambitiously each country plans to move toward the necessary long-term goal. While analysis finds that no major economy is yet doing enough to reduce emissions, there are significant differences between INDCs announced to date. According to WRI estimates (see text box), the EU and U.S. proposals aim to reduce GHG emissions between 2020 and 2030 by approximately 2.8 percent per year. Canada’s is significantly less ambitious at 1.7 percent per year. 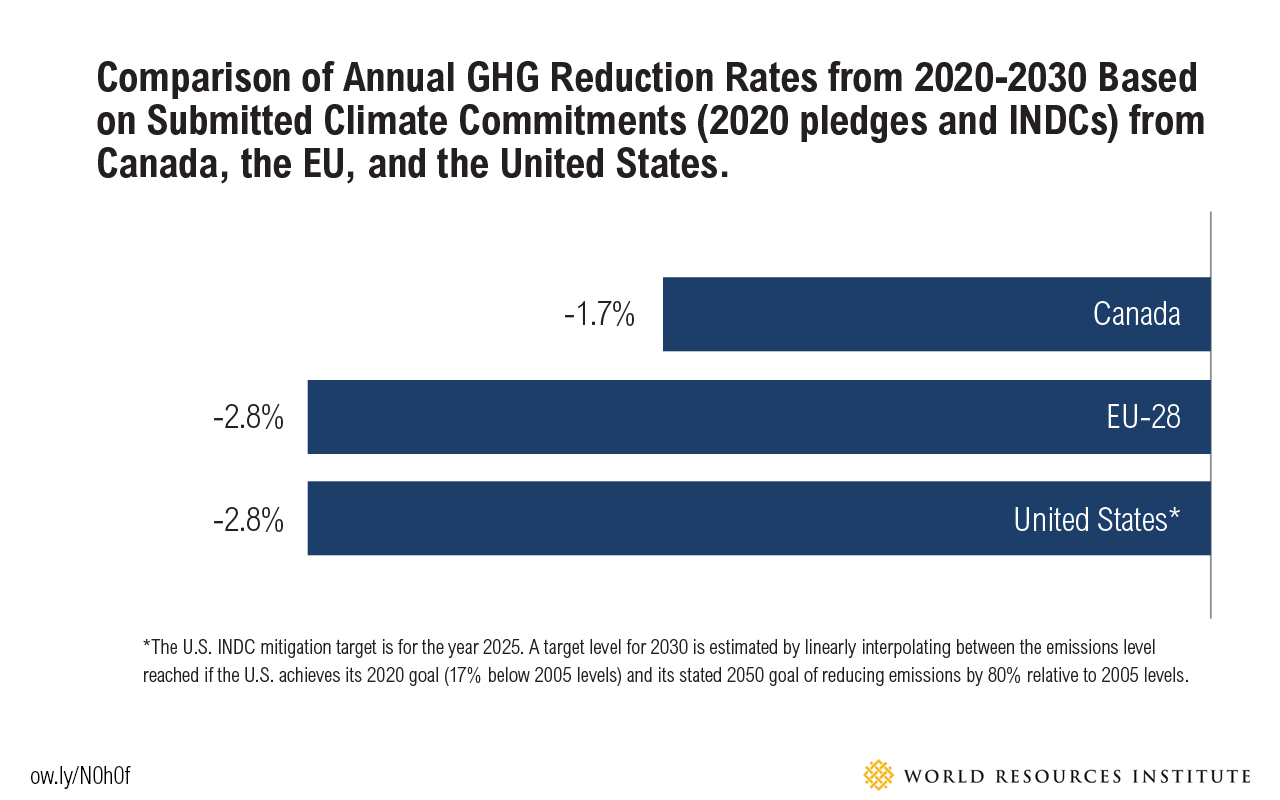 The decarbonization rates are the same whether the land use, land-use change and forestry (LULUCF) sector is included or excluded.

Additional assumptions for estimating emissions in 2030 include:

Historic emissions data for Canada and the United States come from each country’s 2015 national inventory report submitted to the United Nations Framework Convention on Climate Change (UNFCCC) Secretariat. Historic emissions data for the EU-28 come from the 2014 national inventory report submitted to the UNFCCC Secretariat.

Moreover, the EU and the United States will achieve their targets without using international market mechanisms, while Canada has indicated it may use such mechanisms – to an unstated extent – to meet its goal. This means that Canada’s reductions undertaken domestically may not reach the level of its stated target. This is also important due to the risk that reductions achieved under these mechanisms could be double-counted by both buyers and sellers.

This is in contrast to Canada’s earlier commitments for action by 2020, which had aimed to match the United States in terms of ambition. Indeed, the decarbonization rate from 2010 to 2020 implied by Canada’s earlier pledge even exceeded those of the EU and the United States over the same time period – though Canada still has significant work to do to get on track to achieve that pledge. Canada’s 2030 proposal, on the other hand, would put it behind the U.S.

Although we plan additional and more detailed assessments of Canada’s INDC, at its surface, Canada's proposal stands in contrast with its peers’. Canada should reconsider this position, building on its 2020 pledge, and demonstrate to the world that it is serious about combating climate change.