The United States is the largest economy and the second-largest emitter of greenhouse gas (GHG) emissions, so the world can’t avoid the worst impacts of climate change without U.S. leadership. The Obama administration stepped up to this challenge by setting a goal to reduce U.S. emissions by 26-28 percent below 2005 levels by 2025.

So is this target achievable?

Our new study finds that it’s possible for the country to meet this target even without Congressional action, but only if it expands existing state and federal policies. In fact, the country could go even further than the 28 percent goal using existing federal laws and state action. 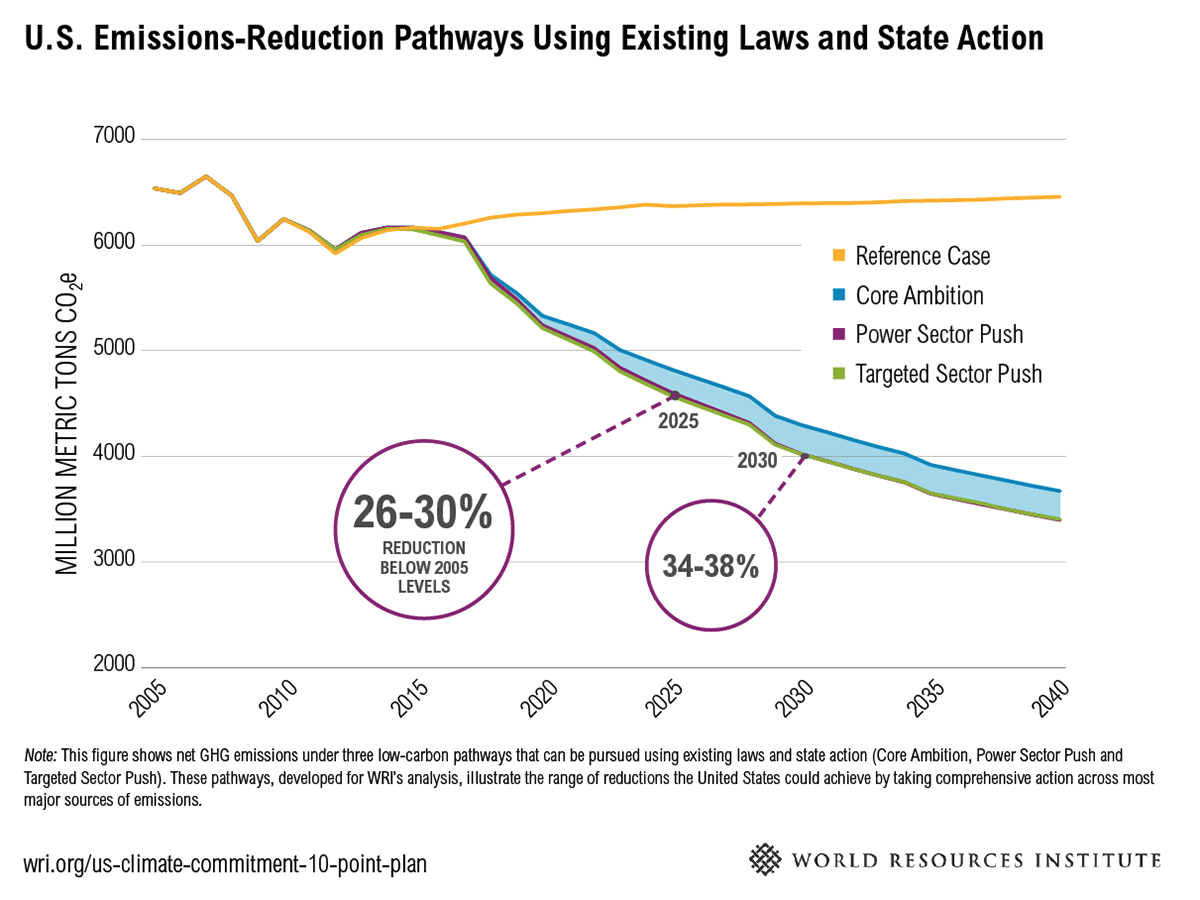 A 10-Point Plan to Get from Here to There

U.S. emissions are projected to rise 8 percent above 2012 levels by 2025, so meeting the 2025 target will require serious effort. Some of this work is already underway—federal agencies are implementing efficiency standards for appliances, cars and heavy-duty trucks, and have proposed emissions standards for existing power plants through the Clean Power Plan.

Our 10-point plan outlines specific steps federal agencies and states can take to meet, and even exceed, the 2025 target:

The power sector is responsible for one-third of U.S. emissions and represents the largest source of potential reductions in the near term. While EPA’s proposed Clean Power Plan is critical to achieving the 2025 goal, going beyond the proposal would make it easier for the country to achieve or surpass its climate targets. EPA, which will finalize the plan this summer, could set tighter emissions standards for state’s power sectors that take into account the full range of cost-effective renewable energy and efficiency resources available. States could comply by expanding their renewable energy standards and energy efficiency savings targets. These policies are already saving consumers money on energy bills and creating new jobs.

Energy efficiency is often a cost-effective option for cutting electricity use and shaving down emissions. The Department of Energy (DOE) should expand its appliance efficiency standards, and states can strengthen their efficiency-savings targets and building codes. State programs that improve the efficiency of homes and businesses regularly save consumers $2 for every dollar invested—sometimes as much as $5.

Many HFCs, commonly used as refrigerants, are potent greenhouse gases. Manufacturers are already developing cost-effective HFC alternatives, and EPA has started to address these emissions, but additional policies are needed to increase adoption. EPA can build on its Significant New Alternatives Policy to ban potent HFCs for certain applications and approve climate-friendly alternatives as soon as they’re available. Because a large amount of HFC emissions occur due to system leaks and service practices, EPA should also encourage industries to reclaim and recycle their HFCs by setting requirements or creating other incentives.

As the country continues to recover from the recession, industrial activity—including manufacturing, construction and more—is projected to rise by one-third from 2015-2030. EPA can mitigate the resulting rising emissions by setting ambitious performance standards for industrial equipment and promoting voluntary programs like EnergyStar certifications for industrial plants.

Natural gas systems regularly leak methane, costing industry money and fueling warming. EPA should create standards that would require new and existing natural gas producers to use methane-capture technologies, most of which pay for themselves in three years or fewer.

Fuel-economy standards finalized in 2012 will reduce emissions and save the average consumer $3,400 to $5,000 over the life of their 2025-model car. EPA and Department of Transportation (DOT) should extend and strengthen these standards when they end in 2025. It’s also important for states and federal agencies to reinforce recent trends in travel demand, such as by investing in public transportation and developing walkable, bikeable communities.

Current fuel standards for medium- and heavy-duty trucks are already reducing pollution and are expected to save drivers a total of $49 billion over the lifetime of model year 2014–2018 vehicles. The administration should extend and strengthen these standards when they end in 2018. Many technologies that can help vehicle manufacturers meet stronger fuel-efficiency standards are already available and cost-effective.

The Federal Aviation Administration (FAA) and EPA both have roles to play in reducing emissions from aircraft. FAA should expand initiatives under its Next Generation Air Transport Systems program to make air travel more fuel-efficient, such as by reducing delays and establishing more precise routes. EPA should continue working towards setting emissions standards for new aircraft that take advantage of technologies to improve engine efficiency, lower weight and reduce drag, especially since an international CO2 emission standard for aircraft is expected to be adopted in 2016.

10) Reduce emissions from other sources and increase carbon sinks.

Federal agencies should establish or expand programs to address the small-but-significant remaining U.S. emission sources, such as off-highway vehicles and manmade industrial gases. At the same time, states and federal agencies can protect and expand natural landscapes that store carbon, like forests and grasslands.

The 2025 climate goal is important for shifting the U.S. emissions trajectory in the right direction, but we can’t stop there. We’ll need even deeper reductions domestically and globally in the longer term to avoid the worst impacts of climate change.

Congress will eventually need to pass new legislation, and it should include putting a price on carbon. We found that the country can reduce emissions 40–42 percent below 2005 levels in 2030 and 50–53 percent in 2040 with a price on carbon while still growing the economy. If coupled with strong energy efficiency policies, like those outlined in our 10-point plan, a carbon price may not lead to higher electricity bills. In fact, we found that monthly household electricity bills could decrease by 8-10 percent below projected levels in 2030 and 11 percent in 2040.

The exact pathway to a low-carbon future may still be uncertain, but it’s clear that the United States has many cost-effective tools at its disposal. The question now is: Will the country harness these opportunities?