Kim, president of the World Bank, and Bloomberg, mayor of New York City, headlined a panel at the Transforming Transportation conference, an event co-organized by the World Bank and WRI’s EMBARQ Center for Sustainable Transport. Through a discussion moderated by Zanny Minton Beddoes, an editor at The Economist, and closed by WRI’s president, Dr. Andrew Steer, Kim and Bloomberg took on the meaty topic of how to shape the future of urban transport.

It was an interesting pairing of perspectives. Bloomberg is a leader in business, government, and philanthropy who has had an enormous impact on New York City. Kim brings a public health and international perspective, and now, at the World Bank, focuses on advancing the goal of reducing poverty and boosting “shared prosperity” across the globe. Despite their different backgrounds, the two shared the idea that sustainable transport goes beyond moving vehicles and infrastructure. At its core, transportation is about improving the health and quality of life for people.

A Critical Moment for Sustainable Transport

As both Kim and Bloomberg noted, the world is moving unsustainably—literally. About 1.3 million people die every year as a result of traffic accidents. In most cities, motorized transport is responsible for 80 percent of local air pollution. And with 70 percent of the world’s population expected to live in cities by 2050, these urban problems are likely to worsen. So now is an especially critical time for discussing sustainable transport. “If you get green transportation right, it pays for itself in terms of economics, in terms of environment, and in terms of human health and well-being,” said Steer. “It’s a wonderful win-win-win.”

How to “get it right,” though, is a heavy question—one without clear answers. Kim and Bloomberg put forth a few ideas during today’s discussion.

4 Ways to Scale Up Sustainable Transportation

Helping the public understand how sustainable transport benefits them is critical to building support for subway systems, bus rapid transit (BRT), bike lanes, and other infrastructure, Bloomberg said. He shared an example from New York, a city whose greenhouse gas emissions are half the national average. The city maps the locations of where children have asthma attacks, finding that the majority align with locations of major roads and interstates. In a very visual, compelling way, this effort shows the benefits that walking, biking, and taking public transit offer.

Bloomberg did just that in New York, transforming the main thoroughfare through Manhattan—from Times Square to Herald Square—into pedestrian walkways. While car advocates complained at first, the move ended up benefiting the local economy. According to Bloomberg, the walkways serve as a tourist attraction and boost traffic to stores in the area. 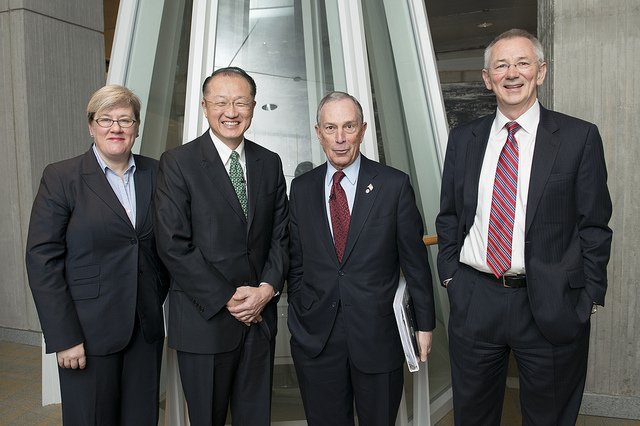 3) Look to the Developing World

Sustainable transport systems increase mobility, but can also alleviate many quality-of-life issues in developing nations. “In the poorest countries, if we can bring about clean, effective, affordable transportation, not only will it reduce greenhouse gas emissions and traffic jams, but give people an opportunity to have a job and a livelihood,” said Kim.

The World Bank is currently working with China’s incoming leadership to evaluate transport innovations in the country and in other nations. Kim said the Bank will then use this analysis to recommend a path forward.

Cities—rather than states or national governments—have historically led the way on sustainable transport, as transit planning depends on each urban center’s unique circumstances. Cities can, however, learn from one another—and in turn, help scale up sustainable transport systems throughout the world.

The C40 Cities Climate Leadership Group—a network of megacities, led by Mayor Bloomberg—fosters knowledge-sharing. “Under the C40 structure we have, we try to find things that each city did and make sure other mayors know about them and how they might apply to their cities,” said Bloomberg. (WRI just signed an MOU to work with the C40 on sustainable transport issues).

“Everybody looks at cities and says they’re so complicated, and messy, and multi-sectoral,” said Steer. “Change can come much quicker and easier if you have the right kind of leadership and solutions.”

The Future of Sustainable Transport

What the sustainable urban transport systems of the future will look like—and if they’ll be implemented at all—is still emerging. But one point from the event was resoundingly clear: Sustainable transport systems must be a critical component of city planning in order for both people and the planet to prosper.

“If things go badly, by the time my three-year-old son is my age, the oceans will be 150 percent more acidic, coral reefs will be melted away, fisheries will be completely disturbed, and every single day, food fights and water fights will occur somewhere in the world,” said Kim. “Working on transport is part of this moral responsibility we have—to the cities of today, and to future generations.”