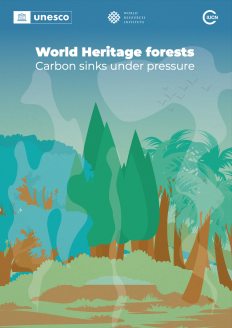 This Report is part of Global Forest Watch and the Land & Carbon Lab. Reach out to David Gibbs for more information.

This Report is part of Global Forest Watch and the Land & Carbon Lab. Reach out to David Gibbs for more information.

Forests are some of the most biodiverse habitats on Earth and play a crucial role in climate regulation by absorbing atmospheric carbon dioxide (CO2). Almost 70 million hectares of forests are protected within UNESCO World Heritage sites. These sites, found across all types of forested landscapes, are of such outstanding and universal value to humanity that countries have committed to protecting them as part of their national and global heritage. However, the climate benefits of World Heritage forests have not been quantified until now due to a lack of available data.

This report, published by UNESCO, WRI, and the International Union for Conservation of Nature (IUCN), combines recently published maps of global forest carbon emissions and sequestration (removals) between 2001 and 2020 with site-level monitoring to estimate carbon fluxes from UNESCO World Heritage forests and the climate consequences of threats to those forests. It finds that World Heritage forests were collectively strong carbon sinks during this period, with net absorption of approximately 190 million tonnes of CO2 from the atmosphere each year, equivalent to roughly half the United Kingdom’s annual CO2 emissions from fossil fuels. Moreover, ongoing carbon sequestration by World Heritage forests has resulted in total carbon storage of approximately 13 billion tonnes, which exceeds the carbon in Kuwait’s proven oil reserves.

World Heritage sites are subject to a variety of threats and pressures, among which land use and climate change are particularly widespread. At some sites, these pressures have increased greenhouse gas emissions and/or weakened the ability of forests to absorb carbon from the atmosphere. At the extreme, ten World Heritage sites were net carbon sources during the 2001-2020 period due to different stressors and disturbances. In the coming years, anthropogenic stressors are likely to affect the climate benefits of additional sites.

World Heritage forests and their surrounding landscapes require strong and sustained protection to maintain their continuing roles as carbon sinks and stable carbon stores for future generations. This report concludes by proposing three pathways to ensure the continued climate benefits of forests in World Heritage sites: rapidly and effectively responding to climate-related events such as wildfires; maintaining and strengthening ecological connectivity through improved landscape management; and integrating the continued protection of World Heritage sites into climate, biodiversity and sustainable development programs.

Climate Benefits of Iconic Protected Forests Are Under Threat

Tell us about yourself
DigitalTransport4Africa (DT4A) Webinar Series: Data Collection Efforts in Informal Transportation & Shared Mobility Around the World