This practice note evaluates the potential for transit-oriented development (TOD) and land value capture (LVC) to evolve in tandem with specific reference to the Bengaluru metro rail network. It recommends policy reorientation to synergize TOD and LVC so that the link between value capture and value creation can be strengthened. 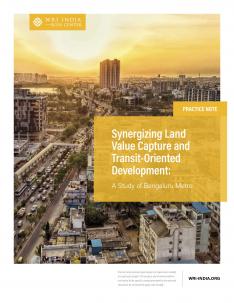 This Practice Note is part of our WRI Ross Center for Sustainable Cities.

This Practice Note is part of our WRI Ross Center for Sustainable Cities.

The Government of Karnataka and Bangalore Metro Rail Corporation Limited are exploring ways to offset the heavy economic burden of expanding the metro rail transit network in Bengaluru. Land value capture (LVC) is a public financing strategy that can recover a portion of the real estate value that development along the metro corridor generates for private property owners. Deployed effectively, LVC can help fund the growth of mass transit and allied infrastructure.

Several LVC mechanisms are under consideration in Bengaluru, but are yet to be implemented. Inherent shortcomings in planning, policy, and institutional frameworks prevent the market from optimizing the benefits of transit-oriented development (TOD), which in turn negatively impacts LVC.

In this practice note, we first evaluate and assess the potential for TOD and LVC to evolve in tandem with specific reference to the Bengaluru metro and, second, posit strategies and recommendations to reorient policies to leverage TOD as an opportunity for LVC, and vice versa. Our learnings are illustrated through case studies of two typical metro stations – an inner-city neighborhood and an upcoming area in the periphery of the city.

As of October 2020, India has 678 kilometers (km) of operational metro lines and another 457 km of approved routes. A further 462 km of lines are under construction (The Metro Rail Guy n.d.). Indian cities are veering toward building metro rail transit (MRT) systems to improve mobility and encourage compact growth. The downside is the heavy cost that creating city-scale infrastructure exacts on public coffers. Local and subnational governments are now exploring innovative financing or value capture mechanisms along with government grants and market finance as a supplementary source of funding. These mechanisms, when used effectively, can support the sustained growth and maintenance of the MRT as well as improvements in allied areas. Properties benefit from the increase in value due to proximity to the MRT, and land-based value capture (LVC) mechanisms help governments gain a revenue share from the property owners. Revenue from value capture offsets a portion of the costs and complements government grants and market borrowings. It has therefore become increasingly important to, first, explore the potential for harnessing value capture mechanisms to contribute to public revenue and, second, document instances where this has been successfully accomplished.

The Bengaluru Metro gave us an opportunity to capture substantive insights into the impact of MRT on real estate development along the metro transit corridor. Though the Bengaluru MRT has reported operational profits, the repayment of their domestic and international loans could take up to four decades. BMRCL is working on a TOD policy and has explored several LVC mechanisms to reduce the loan burden and bolster local contributions. Through this analysis, we have worked to better understand some typical challenges and opportunities for value capture in ways that benefit both the TOD communities and the government.

LVC and TOD: The Synergistic Link

In this practice note, it is our aim to, first, evaluate and assess the potential for TOD and LVC to evolve in tandem with specific reference to the Bengaluru MRT and, second, posit strategies and recommendations to reorient policies in Bengaluru to leverage TOD as an opportunity for LVC, and vice versa.

We focused on the following areas:

We present this as a preliminary analysis based on a report we prepared for the Asian Development Bank (ADB) in 2019 to evaluate value capture potential along Bengaluru’s metro rail Phases 1 and 2. We illustrate our learnings through case studies of two metro stations: Indiranagar, an inner-city neighborhood, and Thalagattapura, an upcoming area in the periphery of the city. We selected these stations for our analysis as each offers a typical example in its category. We hope that this practice note will provide essential information to planners and decisionmakers (particularly those engaged with Bengaluru’s metro rail development) and aid them in developing a policy environment for better LVC through TOD.

The increased accessibility the metro provides has created a positive impact on real estate and business opportunities around metro stations. In our study of the Indiranagar and Thalagattapura metro stations, we observed that enhanced connectivity resulted in some inner-city areas evolving into commercial zones and stations on the periphery of the city, were emerging as lucrative markets for housing. This growth signals a major potential for future development and opportunities for LVC in the form of tools, processes, and institutional frameworks. In that regard, this would be the right time to implement some of the institutional frameworks that the government has been contemplating but has not yet constituted, in particular, a fiscally empowered integrated regional transport authority for the city that can help coordinate land-use transport integration and finance TOD. Appropriate regulations and incentives through the city’s master plan for plot amalgamation and revitalization of TOD areas can encourage real estate investments, thereby increasing the potential for LVC. Moreover, mechanisms such as ring-fenced financing and community participation can help the government reinvest at least part of the revenue earned from LVC for local area improvements in a transparent manner. The ability of the transit agency to raise and invest revenue can help it engage in public-private partnership (PPP) projects, which is good for the development-based LVC mechanisms being piloted in the city.

Several LVC mechanisms are under consideration by BMRCL, but are yet to be implemented. There are multiple factors responsible for this lag:

Recommendations for Scaling Up LVC and TOD

Appropriate regulations and incentives through the city master plan for plot amalgamation and revitalization of TOD areas can encourage real estate investments, thereby increasing the potential for LVC. If BMRCL is able to raise and invest revenue earned through LVC, it can redirect its efforts toward forging PPPs. PPP projects can drive the development-based LVC mechanisms being piloted in the city. Our recommendations, based upon our analysis, are as follows: