Role of the Auto-rickshaw Sector 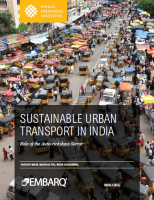 This paper examines the role the auto-rickshaw sector can play in promoting sustainable urban transport in India. It develops a policy vision for this sector and presents recommendations on reforms to address sustainability challenges.

The National Urban Transport Policy (NUTP) of the Ministry of Urban Development, Government of India, is the key guiding policy at the national level focusing on urban transport in India (MoUD 2006). With the underlying rationale of people-based transport planning, the NUTP framework focuses on planning and investments in public transport and nonmotorized transport (NMT) systems in cities.

To meet the objectives of the NUTP, the findings from this study highlight the need for an overarching policy vision for the auto-rickshaw sector in urban transport (Figure E.1) based on the Shift and Improve strategies of the ASI framework to promote sustainable urban transport.

Reform Needs and Next Steps

In accordance with the policy vision, the following regulatory and vehicle-related reforms will help ensure that the auto-rickshaw sector supports public transport and provides alternatives to private vehicles, while addressing the sustainability challenges of emissions and road safety:

As the demand for urban transport increases in India, so too does the popularity of the autorickshaw. Production of this type of motorized three-wheeler has doubled between 2003 and 2010. In major Indian cities, it is responsible for a significant share of motorized trips. Strategies to improve urban transport must include a policy vision for this increasingly important sector. To that end, this paper examines the role the auto-rickshaw sector can play in promoting sustainable urban transport in India. It develops a policy vision for this sector and presents recommendations on reforms to address sustainability challenges.

The Avoid-Shift-Improve (ASI) framework, one of the key approaches to promote sustainable urban transport, is the basis of this study. The ASI framework is based on three key strategies: (1) avoid unnecessary trips, (2) shift to more sustainable transport modes, and (3) improve performance in all modes (Dalkmann and Brannigan 2007). In assessing the role of the auto-rickshaw sector in promoting sustainable urban transport, this paper looks specifically at how auto-rickshaws can contribute to Shift and Improve strategies, using a two-pronged approach:

Role of the Type of Service (Contract Carriage)

The findings from this study indicate that auto-rickshaw services in cities can help meet the objectives of the Shift strategy—of promoting public transport and reducing private motorization—based on the following aspects:

Vehicle Performance and Need for Improvements

This paper assesses the performance of the motorized three-wheeler (auto-rickshaw) in Indian cities with respect to two important sustainability parameters—emissions and road safety—to identify current challenges and areas for vehicle-related reforms that can improve performance:

Insights from the Field: Forests for Species and Habitat