Ensuring Ambition and Accountability through a Rio +20 “Compendium of Commitments” 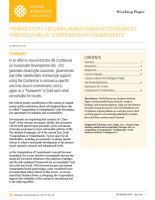 In an effort to ensure that the UN Conference on Sustainable Development (Rio +20) generates meaningful outcomes, governments and other stakeholders increasingly support using the Conference to announce specific and time-bound commitments and to use a “Compendium of Commitments” to hold each other accountable for results. This working paper describes WRI's review of six past and current commitment-based partnerships, some considered more successful than others, and makes recommendations to improve the credibility of the Compendium concept.

In an effort to ensure that the UN Conference on Sustainable Development (Rio +20) generates meaningful outcomes, governments and other stakeholders increasingly support using the Conference to announce specific and time-bound commitments, and to agree on a “framework” to hold each other accountable for results. This so-called “Compendium of Commitments” has been criticized as suggesting a “bottom up”, “pledge-and-review” approach that will lead to business-as-usual outcomes that don’t meet the sustainable development challenges ahead of us. In the few months remaining, proponents of the Compendium of Commitments will have to demonstrate that this approach will lead to ambitious actions and that the accountability framework is sufficiently robust to incentivize and track performance. Rio+20 participants can learn from the range of experiences with past pledge-and-review initiatives and focus on ways to improve the quality of the content of pledges and of the institutions and procedures designed to review them.

Rio +20 takes place in the context of a wider debate on the future of multilateralism and on the role of international law and international institutions in addressing global environment and development challenges. The 1992 Rio Earth Summit generated a variety of internationally agreed guidance and principles (Agenda 21, the Rio Declaration on Environment and Development), spurred the adoption of three major, binding multilateral environmental agreements (MEAs) (the UN Framework Convention on Climate Change (UNFCCC), the UN Convention to Combat Desertification, and the Convention on Biological Diversity (CBD)).

The 2002 World Summit on Sustainable Development (WSSD) focused on “implementation and compliance” rather than the development of new binding rules and obligations. To this end, it provided a platform for announcing “public private partnerships,” negotiated “bottom up” among interested parties (Brack 2000; Speth 2002; WRI 2004). But few of the more than 300 partnerships launched at WSSD have survived and the vast majority never resulted in significant change, due, at least in part, to the lack of any meaningful process for monitoring and review of performance.

The international climate change negotiations have, until recently, marked a similar trend away from “top down” treaty obligations contained in the 1997 Kyoto Protocol, towards “pledges” proposed by each party in the 2010 Cancun Agreements. Others suggest that the more recent (2011) agreement by climate negotiators in Durban to aim towards a “protocol, another legal instrument or an outcome with legal force” means that an interest in negotiated, binding commitments remains. They also point to recent international agreement on new binding protocols to the CBD, and progress on a treaty to reduce mercury emissions.

In any case, it has been clear from the onset of the current negotiations that this Rio process is unlikely to lead to a new set of legally binding treaties. Until recently, it has, however, been unclear what alternative form of outcome would justify holding a global conference on sustainable development at time of heightened concern about the future of the planet.

Yet there is some promise in the concept of pledges. Paragraph 128 of “The Future We Want - Zero Draft of the Outcome Document” states:

We welcome the voluntary commitments made at Rio+20 and invite the Secretary-General to compile them in a registry/compendium that will serve as an accountability framework.

A process that invites participants to come forward with “voluntary commitments”, rather than negotiating them collectively, raises a set of design challenges that will confront proponents of a compendium in Rio: