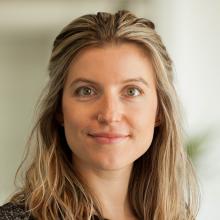 Tamara Coger is a Senior Associate in WRI’s Climate Resilience Practice. She helps to lead the Institute’s work on locally led adaptation and other research and programs focused on adaptation and resilience.

In her time with WRI she has also worked on the Global Commission on Adaptation managing strategic engagement and locally led adaptation, and as a Monitoring, Evaluation and Learning advisor, providing technical support to project design and evaluations across the Institute. Tamara’s background is in climate and development policy, focusing primarily on climate change adaptation and mitigation within agriculture and food systems.

Prior to WRI, Tamara managed international development programs with USAID implementers, including most recently a regional climate services project in West Africa. She has also worked as a policy analyst and researcher for the Organization for Economic Cooperation and Development, where she focused on climate change adaptation and mitigation strategies for agriculture, and for a state legislative campaign in the U.S. focusing on renewable energy and carbon pricing.

Tamara is originally from Boston and has worked extensively across sub-Saharan Africa as well as parts of Latin America and Asia.

She holds a master’s degree in environmental policy and sustainability from Brown University.