Re-Thinking the Legitimacy of Institutions for Climate Finance 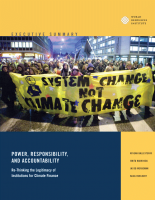 This report seeks to ground the debate on climate finance in an objective analysis of ongoing efforts to finance mitigation and adaptation in developing countries.

This is a dynamic time for climate finance, as the international community struggles to craft mechanisms that are perceived to be legitimate by all UNFCCC Parties and that are capable of funding climate-related activities efficiently and at scale. Our analysis of established and new climate financial mechanisms and the current UNFCCC negotiations leads us to conclude the following:

The 2009 Copenhagen Climate Summit left unresolved major questions about how to fund lowcarbon development in developing countries. In a high-level political declaration—the “Copenhagen Accord”—developed countries agreed to “provide new and additional resources . . . approaching USD 30 billion for the period 2010–2012” and to a goal of jointly mobilizing USD 100 billion a year by 2020 from both public and private sources, to address the needs of developing countries. As the negotiations on a global climate deal continue, disagreement remains on how much of these funds will come from public or private sources and whether these billions should be delivered through new or existing institutions. There is also heated debate over whether a single centralized institution or a decentralized approach that coordinates international, regional, and national institutions would be more effective.

Although there are many variations in government positions, broadly speaking, developed countries favor a substantial role for existing institutions, such as the multilateral development banks (MDBs) that they have funded and led for the past 60 years. Developing countries prefer new institutions, arguing that existing ones favor the interests of contributor countries and have failed to deliver on promises to support poverty alleviation and sustainable development. The ongoing negotiations on a global climate deal reflect this “northsouth” gulf. Despite these differences, one thing is clear: if the institutional arrangements entrusted with managing new flows of climate finance are to succeed in raising the required resources and in investing these resources effectively, they will need to be perceived as legitimate by both contributors and recipients.

The full report seeks to ground the debate on the future of climate finance in an objective analysis of existing efforts to finance climate mitigation and adaptation in developing countries. The authors step back from the question of which institutions should be entrusted with new flows of climate finance to examine instead how governments can design a climate financial mechanism in a way that is widely perceived as legitimate. We identify three crucial dimensions of legitimacy: power, responsibility, and accountability (see Box A). While these three dimensions interrelate and overlap, we have found them to provide a useful analytical framework to analyze and guide choices in institutional design.

We review the governance structures, operational procedures, and records to date of 10 international and national financial mechanisms, with reference to these core dimensions of legitimacy, to draw lessons for future institutional arrangements (see Box B). We place special emphasis on the experiences with the Global Environment Facility (GEF), which, in operation since 1994, is the longest serving operating entity of the United Nations Framework Covention on Climate Change (UNFCCC) financial mechanism. In addition to the GEF, we review experiences from the Multilateral Fund for the Implementation of the Montreal Protocol, in operation since 1990, which is often referred to as a model for future funds. The remaining funds reviewed are much newer and yield more insights with regard to design, rather than operation.

We recognize that perceptions of the legitimacy of a financial mechanism are inherently subjective and that this subjectivity is revealed in the very different preferences expressed by contributor and recipient countries. We believe, however, that if governments were to discuss the dimensions of legitimacy more explicitly, the stakes and the trade-offs would become more apparent, and a more shared understanding on how to design a legitimate financial mechanism would emerge. We believe that the failure, thus far, to address the distribution of power, responsibility, and accountability more explicitly has led to a proliferation of financial mechanisms that are underfunded, which in turn leads to calls to create new mechanisms.

We conclude that a new global deal on climate finance is likely to significantly redistribute power, responsibility, and accountability between traditional contributor and recipient countries. Most significantly, the power of emerging economies to control climate finance mechanisms will grow, as will their responsibility and accountability for the performance of these institutions. In light of the dramatic changes in global politics and the global economy in past decades, this redistribution seems both long overdue and necessary to provide the basis for a successful global partnership on climate finance.

Dimensions of Power, Responsibility, and Accountability in the Design of a Climate Finance Mechanism

Responsibility: The exercise of power for its intended purpose

Accountability: The standards and systems that ensure power is exercised responsibly