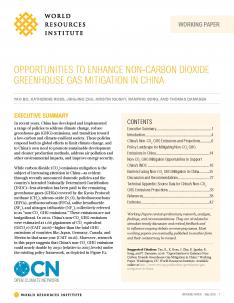 China is making significant progress in the fight against climate change, including a commitment to peak its carbon emissions around 2030. From ramping up its carbon intensity target to limiting coal use to implementing an emissions trading scheme, recent signs show that the country is already beginning to shift toward a more environmentally and economically sustainable model of development.

However, little attention has been paid to greenhouse gases in China beyond carbon dioxide (methane, nitrous oxide, hydrofluorocarbons, perfluorocarbons, sulfur hexafluoride and nitrogen trifluoride). Collectively referred to as “non-CO2 GHG emissions,” they represent nearly one-fifth of China’s total emissions and they, too, must be effectively addressed to meet global climate change goals.

Opportunities to Enhance Non-Carbon Dioxide Greenhouse Gas Mitigation in China, finds that many of the key conditions to addressing non-CO2 emissions in China already exist, and some promising efforts are underway. In fact, our research shows the country can reduce its non-CO2 GHG emissions by almost a third by 2030, just by scaling up existing initiatives.

Of course, there is no quick fix to the climate challenge. Our analysis breaks down the actions China can put in place now and over the longer term to effectively curb emissions.

Beyond CO2: China Can Curb Its Other Greenhouse Gas Emissions by Nearly 30 % by 2030