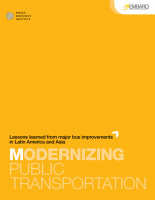 This report provides key findings and lessons learned from a comprehensive review of major bus improvements in 13 Latin American and Asian cities.

The transit improvements in 13 cities reviewed in this report resulted in a variety of improved conditions for city commuters, some of which also benefited the population at large and the environment. These included reductions in air pollutants, greenhouse gas emissions, noise and traffic accidents, and efficiency improvements by bus rapid transit corridors compared with traditional bus services. Corridors in the selected bus systems exhibit very high usage levels (1,780-43,000 passengers/hour/direction), with comparatively low capital investments2 (US$1.4-12.5 million/km), and little or no operational subsidies.

The mega-cities of Latin America and Asia rely on public transport to keep their citizens moving and economies working while mitigating the negative environmental impacts of rapid motorization. Increasingly, these cities are upgrading or even transforming their public transport systems to better serve the needs of their populations and the environment. Some of these efforts have been more successful than others and some more widely publicized. To date, however, there has been no synthesis of benefits and shortcomings of the various approaches taken, in order to inform future urban transport projects in emerging nations. There are several studies, for example, about the celebrated successes of the TransMilenio bus rapid transit system in Bogotá, Colombia, and its counterpart in Curitiba, Brazil, but little literature on the shortcomings of these, and similar systems, creating an informational gap in constructive advice on lessons to be learned.

This study seeks to fill that information gap by summarizing key findings and lessons learned from a comprehensive review of major bus improvements in 13 Latin American and Asian cities. In particular, it reviews and synthesizes information regarding challenges experienced by transport system decision makers in three key areas: planning, implementation and operations. In order to assist urban transport planners and implementing agencies, the study also provides recommendations on avoiding or mitigating similar difficulties when introducing bus reforms in developing world cities.

The selected cities were chosen for several reasons including: long-term recognition in urban transport practices, multi-functional land usage practices for urban environments, and/or the recent1 completion of bus system improvements. The review includes the following cities: Curitiba, Quito, Bogotá, São Paulo, León, México City, Pereira, Guayaquil, Santiago and Guadalajara in Latin America, and Jakarta, Beijing and Ahmedabad in Asia. The cities vary in size and socioeconomic characteristics (see table 1), but in each case buses account for a substantial portion of total public transport use and bus rapid transit (BRT) was introduced as a component of reform.

How to Use this Report

This synthesis report summarizes cross-cutting issues gleaned from an in-depth review of 13 cities based on an analysis of available material, site visits, and interviews with stakeholders, especially members of implementation teams and transit operators. Case studies about several of the reviewed cities have been published on the EMBARQ (www.embarq.org) website.

The following three sections of this report provide: