Lessons from the Fast-Start Finance Period 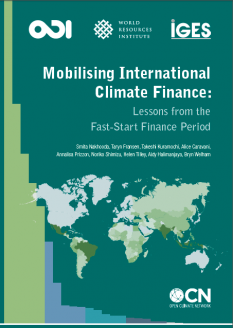 Developed countries report that they mobilised $35 billion in international climate finance for developing countries through the “fast-start finance” period from 2010 through 2012. This study examines the reported contribution in detail, revealing lessons for mobilising and targeting climate finance over the coming decade.

Developed countries committed to provide US$ 30 billion in new and additional climate finance between 2010 and 2012 under the United Nations Framework Convention on Climate Change (UNFCCC). This ‘Fast-Start Finance’ (FSF) was an initial step towards mobilising climate finance at a level that reflects the adaptation and mitigation challenges these countries face. Delivering FSF during a global financial crisis that constrained budgets in many developed countries was challenging. The need for climate finance, however, was urgent then, and will become even more so over the coming decade.

This report reviews the FSF contributions that 37 countries have reported to the UNFCCC. It draws on detailed case studies of the five largest contributors: Germany, Japan, Norway, the UK and the USA. These five countries delivered almost 80% of reported FSF. They also provide a large share of development finance, including Official Development Assistance (ODA) and Other Official Flows (OOF).

Countries reported mobilising US$ 35 billion in FSF, exceeding the US$ 30 billion commitment. However, contributing countries have taken different approaches to defining what qualifies as FSF and have included a wide range of instruments and sources of finance in their FSF reporting. For the most part, they have not used strict thresholds for assessing what is additional. The self-reported FSF figures should be read with these caveats in mind.

While climate finance reporting and transparency have improved, there has been substantial variation in the level of information that countries disclose. Towards the end of the FSF period, some countries that had previously reported incomplete or aggregate information moved towards full project-level reporting, while others provided limited or no project-level information (Table 1). Continuing to improve the availability, accessibility and comprehensibility of climate finance reporting remains a challenge.

While climate finance has increased during the FSF period, much of it is not ‘new and additional’ according to a number of definitions (Table 2). Although developed countries increased their climate-related spending during the FSF period, many have reported as FSF projects, programmes and funds that they were already supporting before the FSF period. At least one country (Germany) mobilised a new source of finance (revenues from carbon markets) to support its FSF contributions and specified a baseline year (2009) against which it considers its efforts to be additional.

Mitigation received much more FSF than adaptation did. Seventy-one per cent of FSF has supported mitigation and REDD+, whereas only 18% supported efforts to assist developing countries in adapting and strengthening their resilience to the impacts of climate change, and 10% supported multiple objectives. Mitigation finance has largely focused on Asia, which is home to many of the world’s fastest-growing economies. Forty per cent of adaptation finance was directed to Least Developed Countries (LDCs) and Small Island Developing States (SIDS).

There has been significant focus on mobilising and leveraging private investment, including through the use of non-concessional public finance. Forty-eight per cent of finance was delivered as loans (concessional and non-concessional), guarantees, and insurance, while 46% was delivered as grants and related instruments. To date, countries appear to have more readily identified private investment opportunities for mitigation than for adaptation.

The recipients of FSF are diverse, and include non-governmental organisations (NGOs), private companies, and other intermediaries as well as governments of developing countries. In fact, only around 34% of FSF targeted governments in developing countries. In many cases, FSF is channelled through intermediaries including dedicated funds such as the Climate Investment Funds (CIFs), multilateral development banks, as well as through bilateral cooperation and development agencies. Approximately 66% of FSF was channelled bilaterally.

Similarly, FSF for adaptation has not been highly correlated with recipient countries’ vulnerability as measured by prominent indices. Further work is needed to understand the extent to which the distribution of FSF reflects other climate-related considerations, such as cost-effective opportunities to reduce emissions or vulnerability within countries.

A continued commitment to scaling up climate finance is needed for both political and practical reasons. From a global perspective, it is important for developed countries to honour commitments to climate finance in the spirit of mutual accountability. This will be essential to securing a more ambitious global agreement on climate change. Moreover, such investments can create opportunities for developed and developing countries alike to find better paths to prosperity. While more climate finance was provided during the FSF period than before it, only a limited share was additional. Nonetheless, the FSF experience demonstrates the potential for businesses based in developed countries to find new opportunities to invest in low-carbon programmes in developing countries, as well as for businesses and companies in developing countries to promote cleaner and more resilient approaches.

Scaling up climate finance will also require strengthening enabling environments in recipient countries, including basic absorptive capacity in those with weaker economies and institutions. The availability of significant public and private dedicated climate finance can help to create incentives to address the underlying policy, regulatory and governance challenges that perpetuate ‘business as usual’. Achieving this goal will require additional effort from developing countries, and support from developed countries for bold action. The non-concessional finance available for mitigation has helped increase deployment in places where underlying enabling environments make low-carbon investments relatively viable. But non-concessional finance is not necessarily well suited to helping countries to strengthen their underlying policy and regulatory regimes and institutions, or to address the additional costs that low-carbon options continue to pose in many contexts.

Climate finance could better target country needs, circumstances and vulnerabilities. Our analysis suggests an opportunity for mitigation finance to better target countries with substantial potential to reduce emissions. Seizing these opportunities will require programmes that are grounded in national realities, and creative partnerships with domestic policy-makers and investors. Similarly there is a recognised need to scale up finance for programmes that support adaptation and strengthen resilience to the impacts of climate change, which received a limited share of FSF. Our analysis suggests an opportunity to spend adaptation finance in ways that better target vulnerable countries. Emerging institutions in the global climate finance architecture, such as the Green Climate Fund, could potentially focus their efforts to these ends.

At the same time, continued public investment in climate-incompatible development is no longer an option. Climate risk needs to be integrated into all development finance. Responding to climate change requires shifting overarching global investment in key sectors away from business-as-usual approaches towards climate-compatible options, avoiding lock-in to high-carbon technologies. Public finance can help to create the incentives and support the technical and institutional efforts that will enable difficult transitions.

There is an opportunity for developed countries to sustain and improve on good practices established during the FSF period by reporting at the project and programme level through UNFCCC reporting templates and other tools, providing complete and comparable information on climate finance and its objectives. Reporting practices varied substantially across countries during the FSF period. It is imperative to continue to improve reporting, rather than reverting to aggregate reporting and opacity about objectives, channels and instruments now that the FSF period is over. The new Common Tabular Format for reporting under the UNFCCC could be used to this end, and complemented with harmonised reporting on other initiatives that monitor spending on climate-related activities including the International Aid Transparency Initiative (IATI) and the Organisation for Economic Co-operation and Development (OECD) Development Assistance Committee (DAC).

Overall, there is a need for a continued emphasis on learning and improvement in deploying climate finance effectively. Many projects supported during the FSF period are in their early stages of implementation, and it will take some time before their impacts are known. Many organisations, including our own, are gathering empirical information and analysis on the outcomes of programmes supported by climate finance. Continued collaboration in such efforts, and frank reflection on their failures and successes, will be essential.