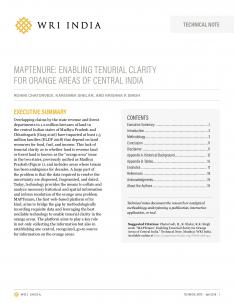 More than half the villages of Madhya Pradesh and Chhattisgarh are affected by a peculiar issue of tenurial ambiguity called “orange areas.” This issue impacts nearly 1.2 million hectares and 1.5 million, largely poor, landless and tribal families, that depend on these lands for food, fuel, fodder and other sources of income. This lack of tenurial clarity also impacts forest protection outcomes in the state and constrains the achievement of biodiversity, water and climate targets. MAPTenure, the first of its kind Web-based platform brings together dispersed, fragmented and dated data that is necessary to resolve the issue. The platform aims to support efforts by the government, civil society organisations and community based initiatives to bring in clarity on the orange areas.

Overlapping claims by the state revenue and forest departments to 1.2 million hectares of land in the central Indian states of Madhya Pradesh and Chhattisgarh (Garg 2016) have impacted at least 1.5 million families (ELDF 2018) that depend on land resources for food, fuel, and income. This lack of tenurial clarity as to whether land is revenue land or forest land is known as the “orange area” issue in the two states, previously unified as Madhya Pradesh, and includes areas where tenure has been ambiguous for decades. A large part of the problem is that the data required to resolve the uncertainty are dispersed, fragmented, and dated. Today, technology provides the means to collate and analyze necessary historical and spatial information and inform resolution of the orange area problem. MAPTenure, the first web-based platform of its kind, aims to bridge the gap by methodologically recording requisite data and leveraging the best available technology to enable tenurial clarity in the orange areas. The platform aims to play a key role in not only collecting the information but also in establishing one central, recognized, go-to source for information on the orange areas.

The Economic Costs and Benefits of Securing Community Forest Tenure