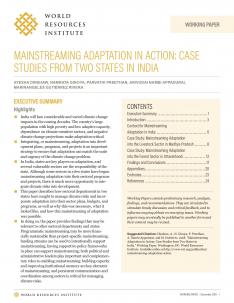 India will face considerable and varied climate change impacts in the coming decades. The country has a large population with high poverty and low adaptive capacity, heavy dependence on climate-sensitive sectors, and is likely to face negative climate change impacts. These factors make adaptation critical. Integrating, or mainstreaming, adaptation into development plans, programs, and projects is an important strategy to ensure that adaptation can match the scale and urgency of the climate change problem. In India, states are key players on adaptation, and several vulnerable sectors are the responsibility of the state. Some sectors in a few states have begun mainstreaming adaptation into their sectoral programs and projects. This paper highlights two case studies of adaptation being integrated into sectoral development programs and projects, in the states of Madhya Pradesh and Uttarakhand. Ideally, the findings from analyzing these case studies will accelerate and scale mainstreaming efforts in India.

Integrating adaptation into sectoral programs, policies, and projects is an effective way to address the magnitude of climate change. India’s large population is highly vulnerable to climate change impacts, and it is important for communities and sectors to adapt rapidly, at scale, in a way that is sustainable over time. One way to achieve this is to integrate adaptation into the day-to-day functioning of relevant sectors, such as agriculture and water, upon which large sections of the population depend for their livelihoods.

In India, these key sectors are the responsibility of states, and states are expected to incorporate climate change into their regular functioning. To prioritize adaptation activities, states have developed and implemented State Action Plans on Climate Change (SAPCCs). These plans have resulted in some interventions being implemented, but there is much more opportunity for progress. Through the upcoming revision of the SAPCCs, states have an opportunity to accelerate and deepen efforts to get climate-sensitive sectors to identify and address climate change risks and impacts in their day-to-day operations, programs, and budgets.

However, there are institutional and financing dynamics that challenge integration of adaptation into sectoral strategies at the state level. For instance, in 2014, the Planning Commission, which was the central body that guided planning and development in India, was dissolved and replaced with National Institution for Transforming India (NITI Aayog). NITI Aayog is a policy think tank that aims to increase the involvement of the states in policymaking. While decentralization of power to the states will be beneficial in some ways, there is a need for centralized planning guidance, directives, and financial support to enable state-level adaptation policymaking. This institutional decentralization has been coupled with financial decentralization, which has resulted in states needing funding for their SAPCCs at a time when they have potentially less access to financial support from the central government. The SAPCC has no dedicated funding mechanism for adaptation, and the link between the SAPCCs and India’s Nationally Determined Contribution (NDC) to the United Nations Framework Convention on Climate Change (UNFCCC), which is the country’s most recent climate plan, is weak.

Despite these challenging dynamics, there is scope for more and better adaptation to be integrated into sectoral programs and projects. This paper provides findings from two case studies to enable and encourage this, by showcasing mainstreamed adaptation that has been done: what it looks like, and how and why it was achieved. One case study looks into how the Department of Animal Husbandry (DoAH) in Madhya Pradesh integrated adaptation into its programs, and the other looks into how a multisectoral project was implemented by the Forest Department in Uttarakhand.

About This Working Paper

This paper provides two in-depth examples of how adaptation is integrated into sectoral programs, projects, and budgets in order to highlight what mainstreamed adaptation looks like and also what is necessary for integrating adaptation into development. Ideally, these findings will enable sectors, departments, and states to accelerate and scale their efforts at integrating adaptation into their day-to-day functioning. Doing so will help India adapt to the negative impacts of climate change more rapidly and at scale. The findings are also relevant to stakeholders who can support the rapid uptake of mainstreamed adaptation in India, such as the Ministry of Environment, Forest and Climate Change (MoEFCC) and state climate change cells.

From Planning to Action: Mainstreaming Climate Change Adaptation Into Development