Investing in Native Tree Species and Agroforestry Systems in Brazil: An Economic Valuation 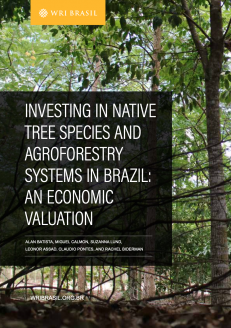 This Report is part of the The Verena Project within our Forest and Landscape Restoration Program. Reach out to Daniel Soares for more information.

This Report is part of the The Verena Project within our Forest and Landscape Restoration Program. Reach out to Daniel Soares for more information.

Silviculture of native species and agroforestry systems have an enormous potential for tropical wood markets, in Brazil and globally. Their economic viability is shown in this report.

These results also demonstrate that the main market risk variables can be included in the valuation of forest assets, including exchange rates, inflation, production volumes, and price volatility.

Connected to this report:

Brazil’s Forests Are Being Restored — Now We Can See Where

The Other Brazilian Rainforest: Why Restoring the Atlantic Forest Can Help Tackle Climate Change

In a Small Amazonian Community, Agroforestry Takes Off