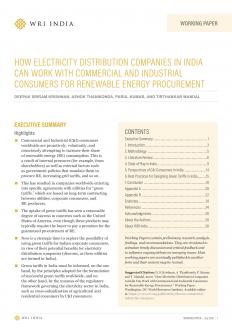 This Working Paper is part of Clean Energy within our Energy Program. Reach out to Deepak Sriram Krishnan for more information.

This Working Paper is part of Clean Energy within our Energy Program. Reach out to Deepak Sriram Krishnan for more information.

As a result of a multitude of factors, such as national and international commitments to Renewable Energy (RE), falling RE prices, government regulation promoting RE, and the advent of sustainability targets, Commercial and Industrial (C&I) consumers all over the world have begun to actively explore the possibility of increasing the share of RE in their power mix. This presents two opportunities: one, an opportunity for C&I consumers to drive the demand for RE products, and two, a unique opportunity for utilities to market new RE products to C&I consumers. This is a topic that merits deeper analysis in the Indian context.