An Accounting and Reporting Standard for Cities 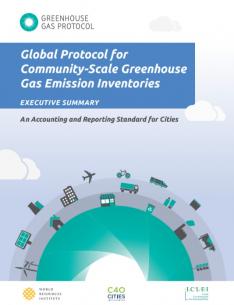 Cities are the global centers of communication, commerce and culture. They are also a significant, and growing, source of energy consumption and greenhouse gas (GHG) emissions. A city’s ability to take effective action on mitigating climate change, and monitor progress, depends on having access to good quality data on GHG emissions. Planning for climate action begins with developing a GHG inventory. An inventory enables cities to understand the emissions contribution of different activities in the community.

Inventory methods that cities have used to date vary significantly. This inconsistency makes comparisons between cities difficult, raises questions around data quality, and limits the ability to aggregate local, subnational, and national government GHG emissions data. To allow for more credible and meaningful reporting, greater consistency in GHG accounting is required. The Global Protocol for Community-Scale Greenhouse Gas Emission Inventories (GPC) responds to this challenge and offers a robust and clear framework that builds on existing methodologies for calculating and reporting city-wide GHG emissions. The GPC requires cities to measure and disclose a comprehensive inventory of GHG emissions and to total these emissions using two distinct but complementary approaches. One captures emissions from both production and consumption activities taking place within the city boundary, including some emissions released outside the city boundary. The other categorizes all emissions into “scopes,” depending on where they physically occur. Separate accounting of emissions physically released within the city boundary should be used for aggregation of multiple city inventories in order to avoid double counting.

“If we want to turn the tide against climate change, cities will need to lead the way. Compact and efficient cities can dramatically reduce emissions and will drive innovation and sustained economic growth. Until recently there has been no consistent way to measure city-level emissions. Now, that has changed. We now have a common international standard to inform strategies to cut emissions and create better, more livable cities.” —Andrew Steer, President and CEO, WRI

“As C40 Chair and Mayor of Rio de Janeiro, I know that building a greenhouse gas emissions inventory enables city leaders to manage their emissions reduction efforts, allocate resources and develop comprehensive climate action plans. With the launch of the GPC, cities now have a consistent, transparent and internationally recognized approach to measuring reporting citywide emissions, allowing for credible comparison and aggregation across timescales and geographies. On behalf of C40, I would like to thank WRI and ICLEI for their partnership in building this powerful standard that will benefit cities across the globe. I strongly encourage other cities around the world to take up this new standard as a key step in the global fight against climate change.” —Eduardo Paes, C40 Chair and Mayor of Rio de Janeiro

“With the launch of the GPC, we now have the most comprehensive greenhouse gas accounting and reporting framework for cities worldwide. Drafting and piloting since 2012, the GPC marks a historic international consensus on GHG accounting and reporting emissions, allowing local governments to measure and track their performances in a consistent standard, guided by international best practices. This published version would not have been possible without the excellent cooperation between WRI, C40 and ICLEI, as well as the practical insight and valuable feedback provided by the 35 pilot cities that tested earlier versions in their cities. ICLEI wants to thank these partners and cities for their indispensable contribution to this game-changing Protocol.” —David Cadman, President, ICLEI