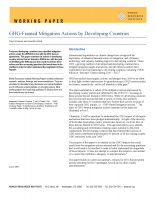 Forty-one developing countries have submitted mitigation actions under the UNFCCC in line with the 2010 Cancun agreements. This paper examines the subset of developing country actions that are framed in greenhouse gas (GHG) terms.

WRI has tracked these targets, actions, and pledges since 2009 in an effort to shed light on their implications for greenhouse gas (GHG) emissions and for finance, respectively, and to call attention to data gaps.

Ultimately, it will be important to understand the GHG impact of all targets and actions that have been pledged internationally. In light of the diversity of forms that developing country actions take, however, we focus first on those that are framed in GHG terms. This approach allows us to identify the accounting and performance-tracking issues common to this form. Additionally, the developing countries that have framed their actions in GHG terms contributed approximately 60 percent of all developing country GHG emissions in the year 2000.

The purpose of this paper is to identify (a) the GHG impacts that could result from the mitigation actions assessed and (b) the accounting questions that would need to be clarified in order to better understand the magnitude of those impacts. It does not attempt to compare the actions to one another or to assess their ambition, adequacy or appropriateness.

This paper builds on a previous summary, released in 2010, that presented actions articulated in the Copenhagen Accord and in other country announcements.