Market and Environmental Implications of Switching to Grass for U.S. Transport 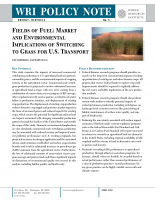 This study examines the impacts of increased commercial switchgrass production on U.S. agricultural land-use patterns, commodity prices, and the environmental impacts of cropping systems in the agricultural sector.

Commercial-scale switchgrass production is projected to involve substantial increases in agricultural land acreage, with new acres coming from a combination of conservation reserve program (CRP) acreage, other cropland currently used as pasture, a reduction of winter fallow in production rotations, and displacement of existing crop production. The displacement of existing crop production reduces domestic crop supply and generates market impacts in the form of increased prices and reduced exports for existing crops, which creates the potential for significant indirect land use impacts associated with changing commodity production patterns beyond the borders of the United States and outside the scope of this study. Domestic environmental implications are also simulated; commercial-scale switchgrass production may be associated with reduced erosion and improved nutrient pollution performance on U.S. working croplands, but projected increases in nitrogen application and the associated nitrous oxide emissions could offset soil carbon sequestration benefits and result in substantial increases in greenhouse gas (GHG) emissions from the agricultural sector. Furthermore, the loss of substantial amounts of conservation reserve program acreage and pasture land could have significant impacts on dimensions of environmental quality not covered by this analysis, including habitat quality and biodiversity.

When President Bush mentioned switchgrass in the 2006 State of the Union address, listeners across the country responded with a collective “huh?” But in part due to that highly visible endorsement, and in part due to the explosive growth of the ethanol industry and the rapid advancement of ethanol conversion technologies, this modest prairie grass species has now become a household word. As large sections of the U.S. ethanol industry push hard to move beyond the current generation of corn-based ethanol and introduce technologies that will allow use of a much broader range of feedstocks for ethanol production, increased attention is being paid to new feedstocks that have the potential to be produced at large commercial scale. In this Policy Note we explore the potential for the use of switchgrass as a domestic energy source, as well as some of the environmental issues associated with producing it at a large scale.