A Fair Share for Women: Toward More Equitable Land Compensation and Resettlement in Tanzania and Mozambique 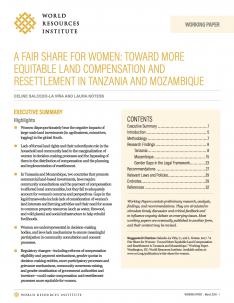 Tanzania and Mozambique — countries of vast mountain ranges and open stretches of plateaus — now face a growing land problem. As soil degradation, climate change and population growth place enormous strains on the natural resources that sustain millions of people, multinational companies are also gunning for large swaths of land across both countries. Caught between these pressures, many poor, rural communities get displaced or decide to sell their collectively held land. While they almost always get the short end of the stick in commercial land deals, women struggle more than men to rebuild their lives and livelihoods when villages resettle.

A Fair Share for Women: Toward More Equitable Land Compensation and Resettlement in Tanzania and Mozambique finds that, despite constitutional commitments to gender equality, governments in Tanzania and Mozambique are not protecting poor, rural women from harmful commercial land deals. State officials’ failure to close gaps in land laws and overhaul ineffective regulations shortchanges women who receive little to no payment for their families’ land. Attempts to amplify women’s voices in community land decision-making are also falling short. But advancing women’s land rights, from equal treatment in commercial land deals to better representation in community decision-making, is critical to achieving gender equality not just in Tanzania and Mozambique, but also in countries across Africa. This working paper provides recommendations that government officials, private sector leads and civil society can adopt to improve gender equity in commercial land acquisitions.

Studies show that women disproportionately bear the adverse impacts of land commercialization in the global South. Investments in agribusiness, mining, or logging have resulted in loss of land and displacement of local communities, loss of livelihoods, and loss of communal assets—and the effects are worse for women than for men. With fewer tenure rights, higher illiteracy rates, less mobility, and subordinate roles in the community, women are often sidelined in decision-making, the distribution of compensation, and the planning and implementation of resettlement schemes. Women generally do not receive compensation payments, and they lose access to resources (water, firewood, wild plants, and fruits) they need for household consumption and supplemental livelihoods. When displaced and resettled to new areas, they are left with little means to rebuild their productive systems and social networks.

This paper examines how gaps in the legal frameworks governing land compensation and resettlement in Tanzania and Mozambique result in exclusionary outcomes for women. It builds on an earlier World Resources Institute (WRI) working paper, “Making Women’s Voices Count in Community Decision-Making on Land Investments,” which examines the regulatory frameworks governing the land acquisition processes and identifies ways to strengthen women’s participation in the decision-making involved. This paper analyzes the subset of regulations that govern the parallel processes of land compensation and resettlement. Like the earlier paper, it stems from a collaborative project by WRI, the Tanzania Gender Networking Program (TGNP) Mtandao, the Tanzania Women Lawyers Association (TAWLA), and Centro Terra Viva (CTV) (in Mozambique). WRI conducted the legal analysis and literature review, with inputs from the country partners; the partners conducted field research, in some of which WRI participated. The project also included outreach activities in the communities studied and with relevant subnational and national government agencies. The goal of the project is to have women recognized as stakeholders in community land governance and create spaces for their engagement in decision-making processes.

Legal Framework on Compensation and Resettlement

Tanzania and Mozambique are among the top targets for commercial land acquisitions in the global South. The governments of both countries encourage investor interest, which centers on extractives and agricultural commercialization. Most land intended for or allocated to investors is legally recognized as owned or occupied by customary communities, resulting in displacement and disputes between communities and investors.

The laws of both countries require payment of compensation when community land is acquired. In Tanzania the regulations implementing the land laws, particularly the 2001 Village Land Regulations, set forth the requirements and procedures for compensation. Compensation is paid for land and improvements, such as houses, trees, and standing crops, based on specified valuation methods. Certain allowances—disturbance, transportation, accommodation, and loss of profits—may also be paid. Compensation may be in cash; replacement land; in kind (seedlings, grain supply, etc.); or a combination of forms. However, except under the Mining Law and in projects financed by development banks, providing replacement land is merely an option, not a requirement. The village council (the village governing body) must file a compensation claim for communal land and assets, and affected households must submit the claim for land held. No specific policy, law, or regulation governs resettlement.

Mozambique’s legal framework lacks adequate guidelines for compensation. The 1997 Land Law requires that after the investor holds consultations with affected communities, the district administrator shall issue an opinion on whether the land is free and unoccupied and if not set down the terms of “partnership” agreed upon by the investor and the community. The law provides no specific guidance for establishing the terms of “partnership.” In instances of expropriation, acquisition for extractives purposes, or resettlement, the law does require payment for the loss of tangible (crops, improvements, etc.) or intangible (transport and communication routes, social networks, etc.) assets. For extractives-related acquisitions, compensation is fixed in a memorandum of understanding between the government, the community, and the company. For all other commercial acquisitions, the 2012 Resettlement Regulations require a full-scale resettlement plan and implementation action plan that includes a compensation criteria and budget. Public participation in the form of consultations and hearings is mandated. A technical committee composed of national and local government representatives and one member of the “related area” has oversight functions.

The Practice of Compensation and Resettlement

Lack of full, fair, and prompt compensation is a pervasive complaint in both countries. “Unused” or “idle” land (e.g., fallow or grazing land) is often uncompensated, and improvements such as crops are vastly undervalued. Cash compensation is typically delayed and inadequate to purchase replacement land of the same size or productive quality and nonmonetary compensation insufficient to meet the needs of households. Communities are often required to vacate the land before they receive full compensation and before the relocation site is ready for settlement. Replacement farmlands are almost always less fertile, smaller, and too far from the community. Purported project benefits, such as employment, infrastructure, and services, seldom materialize; they are either oral promises or written but not legally binding. Investment projects are essentially presented to communities as done deals.

Women’s concerns are hardly considered, in law or in practice. Generally, women do not receive compensation, because payment is made at the household level and it is the husband, as head of household, who is authorized to submit claims and receive payments. Some Tanzanian widows complain that their late husband’s relatives assert entitlement to compensation based on customary law. When they do receive compensation, women tend to receive less than men, because they have smaller plots and fewer crops and because subsistence crops (which they tend to raise) are often not compensated at all.

The loss of access to communal lands and forests—from which resources such as water, firewood, fodder, wild plants, and fruits are gathered—also disproportionately affects women. When these resources are not compensated for or replaced, or when compensation does not reach women, household nutrition may suffer, and women may have to spend more time and energy fulfilling their domestic responsibilities. Similarly, when social services and infrastructure—such as roads and health posts, as well as intangible assets such as communication routes—are not compensated for or replaced in resettlement sites, women’s resilience and ability to cope with new and often harder living conditions are severely affected. Benefits such as employment opportunities usually favor men, although in some instances female labor is preferred in lower-skilled manual tasks. Overall, given their manifold disadvantages, women have fewer options than men for replacing lost livelihoods and resources.

Women are underrepresented in decision-making bodies, and laws lack mechanisms for their meaningful participation. As a result, women find it hard to exercise whatever rights they may have. In Tanzania gender quotas in village governance bodies provide avenues for women’s engagement in the land acquisition process. Additional mechanisms, such as quorum and voting requirements, are needed to ensure that their voices are not drowned out. In Mozambique the technical committee with primary oversight responsibilities for resettlement does not mandate women’s representation, and the gender ministry is not required to provide inputs to the resettlement plan. The regulations do provide that vulnerable groups such as widows, households headed by women, the elderly, and youth must be heard. But women’s participation must be conceived beyond their vulnerability and considered in terms of their agency and contributions as stakeholders.

Tanzania and Mozambique must address deficiencies in their legal frameworks to ensure a fair deal for women and their communities. Guided by key human rights principles—such as gender equality, due process, free and prior informed consent, and just compensation—the regulations on compensation and resettlement should address the following concerns:

The institutional and administrative framework of government must be strengthened through gender trainings and sensitization activities, mechanisms for improved institutional coordination, and increased transparency and accountability. Governments play a critical role in creating spaces for social change through gender equitable laws and regulations that are implemented in gender-sensitive ways.