China, the United States, and the Climate Change Challenge 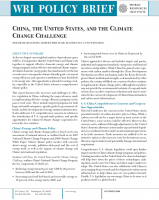 This report discusses the successes and challenges to effective regulation in China. It also addresses U.S. competitiveness concerns in relation to the introduction of U.S. cap-and-trade policies, and specific opportunities for enhanced climate change cooperation between the two countries.

This brief addresses the concern in the United States about potential transfer of carbon-intensive jobs to China. While a carbon cost will not be a major factor in most sectors in the United States, some sectors could be affected. However, this concern can be addressed through adjustments to the United States’ domestic allowance system under cap-and-trade legislation, by coordinated action under an international agreement, or by trade measures. Trade measures are unlikely to be an attractive option as they increase costs for downstream users, threaten export markets and potentially damage international negotiations.

Comprehensive U.S. climate legislation could spur further improvements in China’s climate change programs and policies. Creating incentives in the United States for clean technologies will help drive down the prices of these technologies, making them much easier for China and other major emitters to adopt. The United States can also collaborate with China in areas ranging from research and development to enforcement infrastructure to help China move its own policies forward. Finally, U.S. legislation can encourage China to do more as it positions itself as a global leader.

This brief outlines a number of bilateral and multilateral venues for enhanced cooperation. In the bilateral sphere, the new U.S.-China Memorandum of Understanding to Enhance Cooperation on Climate Change, Energy and the Environment, signed at the first meeting of the revamped Strategic and Economic Dialogue (S&ED) in Washington, D.C. in July 2009, provides a coherent framework for this cooperation. The new MOU incorporates the Ten Year Energy and Environment Framework developed under the previous U.S. presidential administration, provides a framework for cooperative projects and creates a new coordinating committee for both countries’ energy and environment agencies. The challenge will be to follow through on coordination and delineate clear goals and timetables. Many of the structures set up under the previous U.S. administration, not just bilaterally, but also multi-laterally, such as the Asia Pacific Partnership (APP) for Clean Development and Climate and the Major Economies Forum (MEF) have real potential to bring together key players, but they need more sharply defined goals and missions, and the United States will need to clarify funding. All of these programs can support domestic policies in each country as well as both countries’ efforts to reach a global agreement at Copenhagen in December.

As the two largest current global emitters of greenhouse gases (GHGs), it is imperative that the United States and China work together to support effective domestic energy and climate change programs and an effective international climate regime. As China’s domestic energy policy has transformed over the last several years to incorporate climate-friendly goals – increased energy efficiency and a greater contribution of non-fossil fuels to its energy mix – this opportunity is already becoming a reality, especially as the United States advances comprehensive climate policy.

This report discusses the successes and challenges to effective regulation in China, outlining the major advances made in implementing effective energy efficiency programs in the past several years. These include targeted programs for both large and small enterprises, specific goals for government officials, and the development of energy statistics infrastructure. It also addresses U.S. competitiveness concerns in relation to the introduction of U.S. cap-and-trade policies, and specific opportunities for enhanced climate change cooperation between the two countries.

China’s energy and climate change policy is based on its own assessment of national interest as outlined both in its 2007 National Climate Change Program and 2008 Climate Change White Paper. China’s climate policy meshes with concerns about energy security, pollution abatement and the cost of energy itself, as well as the impacts of climate change and China’s international reputation.

Section 1 of China, the United States and the Climate Change Challenge, outlines China’s National Climate Change Program, the key components of which are:

China’s approach is diverse and includes targets and quotas, industrial and equipment standards, energy taxes and financial incentives and penalties. While China has gained some experience with carbon markets through the Clean Development Mechanism (an offset mechanism under the Kyoto Protocol), given China’s institutional strength, as demonstrated by other policies, the country will likely use a variety of tools to continue to implement its climate change policy. Although these policies may not provide the environmental certainty of a cap-and-trade system, they can drive emissions reductions and may be more suited to the current development of China’s financial markets and enforcement infrastructure.

Getting Every Ton of Emissions Right