Bridging the Gap Between Energy and Climate Policies in Brazil 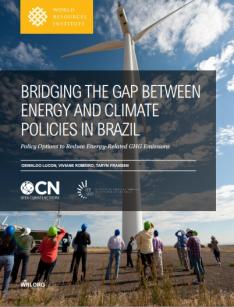 This report reviews a range of modelling scenarios for future GHG emissions, identifies opportunities and recommends lines of action to harmonize energy policy objectives with climate goals that meet the needs for a limited global carbon budget.

A steep decline in deforestation—the main cause of GHG emissions in Brazil—and a quick growth in the energy sector's emissions has meant that total emissions in change of land use and energy sectors are now almost equal. Traditionally a leader in renewable energy, it is imperative that Brazil's Intended Nationally Determined Contribution (INDC) for the 2015 Paris Climate Agreement goes beyond mitigation on forestry and includes bold moves in the energy sector. This report reviews a range of modelling scenarios for future GHG emissions, identifies opportunities and recommends lines of action to harmonise energy policy objectives with climate goals that meet the needs for a limited global carbon budget.

Until recently Brazil’s greenhouse gas emissions have been dominated by deforestation and land use change. But good progress in reducing deforestation and rapid growth in energy use have shifted this balance so that emissions from land use change and energy are roughly equal. This is leading to a greater focus on the potential role of mitigation actions for energy-related GHG emissions in Brazil’s transition to a low carbon economy.

Emissions from power generation in Brazil have traditionally been low due to strong reliance on hydroelectricity. But recently, even while renewable-sourced energy continues to grow in absolute terms in both electricity and energy mixes, fossil based energy has been growing much faster, leading to a strong upward trend in emissions. The good news is that Brazil can reverse this trend. With nearly half of Brazil’s energy-related GHG emissions now coming from transportation, the report finds that Brazil can make significant headway by tapping its vast renewable energy potential (especially on wind and solar), modernizing its vehicles, and encouraging mass electrification and hybridization of its transportation fleet. Such efforts would not only make a major contribution to Brazil's mitigation efforts, they would also deliver health co-benefits to its citizens and increase the livability and competitiveness of its cities.

Recent research from many countries around the world has shown that a bold shift towards a low carbon economy need not involve large incremental costs. On the contrary, done right, it can lead to accelerated technological change, more jobs, a better quality of life, and faster economic growth. Brazil can position itself as a leader in this historic transformation.

It also provides recommendations to improve integration between climate and energy policies in Brazil.