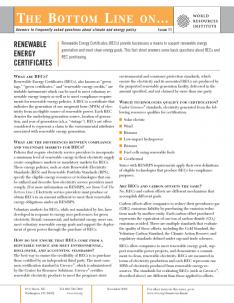 Renewable Energy Certificates (RECs), also known as “green tags,” “green certificates,” and “renewable energy credits,” are tradable instruments which can be used to meet voluntary renewable energy targets as well as to meet compliance requirements for renewable energy policies. A REC is a certificate that indicates the generation of one megawatt hour (MWh) of electricity from an eligible source of renewable power. Each REC denotes the underlying generation source, location of generation, and year of generation (a.k.a. “vintage”). RECs are often considered to represent a claim to the environmental attributes associated with renewable energy generation.

What are the differences between compliance and voluntary markets for RECs?

Voluntary markets for RECs, while not mandated by law, have developed in response to energy user preferences for green electricity. Retail, commercial, and industrial energy users can meet voluntary renewable energy goals and support the deployment of green power through the purchase of RECs.

How do you ensure that RECs come from a reputable source and meet environmental, disclosure, and accounting standards?

The best way to ensure the credibility of RECs is to purchase those certified by an independent third party. The most common certification standard is Green-e®, which is administered by the Center for Resource Solutions. Green-e® certifies renewable electricity products to meet the program’s strict environmental and consumer protection standards, which ensure the electricity and its associated RECs are produced by the purported renewable generation facility, delivered in the amount specified, and not claimed by more than one party.

Which technologies qualify for certification?

Under Green-e® standards, electricity generated from the following resources qualifies for certification:

States with RES/RPS requirements apply their own definitions of eligible technologies that produce RECs for compliance purposes.

Are RECs and carbon offsets the same?

No. RECs and carbon offsets are different mechanisms that accomplish different goals. Carbon offsets allow companies to reduce their greenhouse gas (GHG) emissions liability by purchasing the emission reductions made by another entity. Each carbon offset purchased represents the equivalent of one ton of carbon dioxide (CO2) emissions avoided. There are multiple standards that evaluate the quality of these offsets, including the Gold Standard, the Voluntary Carbon Standard, the Climate Action Reserve, and regulatory standards defined under cap-and-trade schemes. RECs allow companies to meet renewable energy goals, support renewable power projects, and demonstrate a commitment to clean, renewable electricity. RECs are measured in terms of electricity production and each REC represents one MWh of electricity produced from renewable energy resources. The standards for evaluating RECs (such as Green-e®, described above) are different than those applied to offsets.

What are factors that influence REC prices?

Prices for RECs can vary significantly based on a range of factors including, but not limited to, the technology, local supply and demand, and regulations in compliance markets.

What environmental claims can be made for an on-site renewable energy project if the project owner sells the RECs?

What are the differences between buying “green” electricity and buying RECs?

In a REC purchase, electricity and assurance of renewable generation are purchased separately. In this “unbundled” approach, the customer buys regular electricity from their electricity service provider but purchases the renewable energy certificates from a REC vendor. In this transaction, the renewable energy project and customer do not need to be in the same grid. An on-line resource created by the Department of Energy that lists REC vendors can be accessed at: https://apps3.eere.energy.gov/greenpower/.

Some utilities also offer packages that include electricity and RECs as part of the same purchase, but the RECs are not necessarily from renewable energy projects in the utility’s service area. In this case, the utility has purchased the RECs from another party and re-sells them to their customer. The net effect for the customer is the same as buying RECs plus regular power, but with the convenience of combined billing.

Why do companies purchase RECs?

RECs are a flexible tool to help achieve clean energy goals and support the renewable energy market. They can be attractive to companies in regions where green pricing programs are not offered or are insufficient or where policy support for on-site projects is lacking. By purchasing RECs, businesses do not need to alter existing power contracts to obtain green power. Additionally, RECs are not limited by geographic boundaries or transmission constraints. For corporations with facilities in multiple states or energy grids, a consolidated REC procurement can be part of a strategy to meet overall clean energy goals.