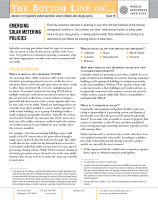 Electricity consumers interested in switching to solar often find that traditional utility metering arrangements based on a “one customer, one meter” model present barriers to selling power back to the grid, siting projects, or owning systems jointly. These limitations are starting to be addressed by more flexible net metering policies in many states.

Inflexible metering procedures limit the types of customers who can invest in solar electric power, and the scale of systems. New policies for virtual net metering, community solar, and meter aggregation can make solar more economical and accessible.

What is virtual net metering (VNM)?

Net metering allows utility customers with on-site renewable electricity generating systems to receive credits for excess electricity that is sent to the grid and to later use those credits to offset their electricity bill, or receive outright payment for them.1 In contrast, virtual net metering (VNM) allows multiple customers (with their own discrete meters) to share the net metered credits from a system without rewiring to physically link their meters to the system. Specific rules vary by state, and even by utility. Virtual net metering policies are currently most often available to owners and/or operators of multi-tenant buildings, or to a group of buildings within a small contiguous geographic boundary. Typically, the system must located “behind” (on customer side of) the meter of at least one of the utility customers credited and/or the customers credited must be located within the same facility where the system is installed.

For example, a low-income housing building owner could install a solar PV system where the power flows through a single meter and feeds directly back into the grid. The utility would allocate the credits for the kilowatt-hours received to each tenant’s individual utility account based on a pre-agreed percentage sharing scheme. While VNM customers sharing an electricity generation source do need to be in the same utility territory, they do not need to be under the same rate schedule in most states.

Currently, virtual net metering is most often available for occupants of multi-tenant buildings, low-income housing, municipal buildings, and to groups of buildings in contiguous proximity to the solar installation. Without VNM, separate tenants with a solar investment on their building’s roof would each have to be physically connected to the system to receive net metered credits on their separate utility bills. This is cost-prohibitive and logistically difficult.

What is “community solar”?

Community solar programs and policies facilitate joint ownership or sponsorship of a generating system, and sharing of the benefits even when the power itself cannot be physically shared. It can make solar accessible to owners of property that cannot accommodate a solar PV array and those prohibited from entering into legal ownership structures typically used for solar, among others.

Policies and incentives vary from state to state, thus there is no one standard community solar model. According to a publication of the National Renewable Energy Lab, three project models are currently the most common:

Community solar models often aim to reduce the high upfront costs of solar, sometimes allowing participants buy into the program’s installation(s) monthly or per kWh. Their contribution then entitles them to receive payments for the system’s production, and can fix the price for a portion of their bill to protect against future price increases.

Where is community solar allowed?

The following states allow at least one of the community solar models listed above:

What is “meter aggregation”

Meter aggregation allows for allocation of the credits from a solar electric system to meters in buildings separate from where the actual power is produced, if they are on the same customer’s utility account. It is usually reserved for buildings located in a tight geographical boundary, either adjacent to one another or located no more than a few miles from one another. It can be done physically, which may require additional equipment, or virtually.

Often, net metering policies limit the amount of power that a customer can sell back to the grid to less than a set percentage of their annual consumption. The benefit of meter aggregation is that several facilities’ metered annual consumption is aggregated; thus the owner can install a larger system and sell more power back. Meter aggregation is often used in agricultural operations or business campuses where there are multiple separate facilities with the same owner.

China's Overseas Investments in the Wind and Solar Industries