Spotlight on Oil in Uganda 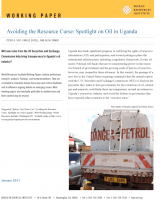 This working paper examines whether new rules from the U.S. Securities and Exchange Commission could help bring transparency to Uganda’s oil industry.

Uganda has made significant progress in codifying the rights of access to information (ATI) and participation, and toward putting in place the institutional infrastructure, including a regulatory framework, for the oil sector. Political roll-backs that are re-concentrating power in the executive branch of government and the growing scale of known oil reserves, however, may jeopardize these advances.

In this context, the passage of a new law in the United States requiring companies that file annual reports with the U.S. Securities and Exchange Commission (SEC) to disclose the payments they make to host governments for the extraction of oil, natural gas and minerals, could help shore up transparency around investment in Uganda’s extractives industry and avoid the failures in governance that have exposed other countries to the “resource curse.”

Update: On 21 April 2011, the government of Uganda signed into law new regulations for implementing Uganda’s Access to Information (ATI) Act of 2005. The ATI Regulations were long awaited and widely welcomed, since many local and international advocates believed their absence had hindered full implementation of the Act, and stymied efforts to increase transparency and accountability. The Regulations support implementation of the ATI Act in a number of important ways. For example, they establish procedures for citizens to request government-held information and for government to respond to citizen requests. But the Regulations also include a number of burdensome provisions that make access unnecessarily costly and difficult and, as such, they are not in the spirit of the strong right to information provision found in Uganda’s Constitution.

Mapping a Better Future: How Spatial Analysis Can Benefit Wetlands and Reduce Poverty in Uganda