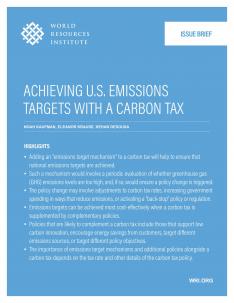 Achieving U.S. Emissions Targets with a Carbon Tax provides insight on how incorporating emissions target mechanism into a strong national carbon tax can help ensure intended emission cuts are achieved. This mechanism establishes predictable ways of adapting the carbon pricing program over time to respond to any shortfall in emissions reductions. The report describes a basic two-step process– periodic evaluation of whether emissions reductions are on track to meet targets followed by an adjustment mechanism if reductions are less than anticipated.

A national carbon tax would decrease U.S. GHG emissions by providing a financial incentive to shift to less carbon intensive behavior. Additional policies and mechanisms alongside a carbon tax can further decrease emissions and improve economic outcomes. This paper, the fourth in a series by World Resources Institute (WRI) on carbon pricing in the United States, provides an overview of how a carbon tax can fit into a broader strategy to achieve national GHG emissions targets by ensuring that emissions targets are achieved with sufficient certainty and by surrounding the tax with complementary policies that enable larger and more cost-effective emissions reductions.

The second step is a policy change that is triggered when the evaluation deems emissions levels to be too high. This policy change can come in many forms, which we separate into four categories:

Additional policies alongside a carbon tax can further reduce emissions in a cost-effective manner. The following are three major categories of policies that can complement a carbon tax as part of broader strategy to achieve a U.S. emissions target:

Policies that do not fall into these three categories are less effective complements to a carbon tax if they are likely to involve administrative and regulatory costs without achieving significant climate benefits. In particular, policies may be duplicative if they (1) address the same emissions sources and (2) do not have a major rationale aside from reducing GHG emissions (e.g., addressing a separate market barrier). Indeed, if a sufficiently strong federal carbon tax is implemented, some policies are likely to be partially or fully duplicative from a GHG-reduction perspective.

The benefits of mechanisms and policies alongside a carbon tax depend on the details of the tax. If carbon tax levels are relatively low, it is more likely that an emissions target mechanism will be triggered to achieve a given emissions target. Alternatively, stronger complementary policies may be needed because the carbon tax alone is not “pulling its weight.” For example, with a “weak” carbon tax that insufficiently encourages private sector investments in clean energy innovation, additional government support for RDD&D — from support for basic research to incentives for deployment of emerging technologies — could help fill this gap. On the other hand, if carbon tax rates are sufficiently high to comfortably achieve emissions targets, a mechanism that kicks in when emissions are too high is unlikely to be triggered. Still, even an emissions target mechanism that is never triggered can be an important component of a national climate change strategy—after all, ensuring that emissions targets are achieved without such a mechanism may require higher carbon taxes or additional complementary policies, both of which could impose additional costs on regulated entities and taxpayers.

Assembling a coalition of lawmakers to pass strong federal climate legislation will require policies that stand up to environmental and economic scrutiny. Even among those inclined to support a carbon tax, some powerful voices (e.g., many in the environmental community) will push for greater emissions certainty and additional policies alongside the tax, while others (e.g., many in industry) will push for greater policy simplicity, regulatory certainty, and fewer duplicative regulations. Designing a policy that earns support from both groups will be a major political challenge. By combining a strong carbon tax with a simple emissions target mechanism and a targeted portfolio of complementary policies that focuses on areas where a carbon tax has limitations, policymakers can design a national climate strategy that achieves ambitious emissions targets cost-effectively, which should earn the support of all groups that wish to reduce the risks of climate change.

Putting a Price on Carbon: A Handbook for U.S. Policy Makers