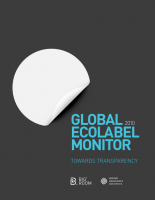 This report summarizes the findings of the Global Ecolabel Monitor, a comprehensive survey on the performance and organisational structure of ecolabels around the world.

Full results are available at Ecolabelindex.com.

How do consumers and institutional buyers know if something is ‘green’ or ‘ecofriendly’? As environmental qualities are often imperceptible in the final product, producers need to make them visible to consumers.

Many ecolabels and eco-certification schemes have been launched to validate green claims, guide green purchasing, and improve environmental performance standards. Done well, ecolabels and eco-certifications can provide an effective baseline within industry sectors by encouraging best practice and providing guidelines that companies must meet in order to meet a certified standard.

Demand for products with ecolabels is growing, though confusion about which companies are truly environmentally responsible persists. For example, the numbers of ecolabeled organic food products and forestry practices have grown at 20-30% per year since the late 1990s and early 2000s (USDA, 2007). A 2009 Mintel study showed that the green market outperformed the US economy as a whole in 2009 and grew by over 40% from 2004 to 2009.

More than a third of US consumers now say they are willing to pay a premium for eco-friendly products (according to a March 2010 Mintel study). In some cases this is even higher, for example 53% of US consumers would be willing to pay a premium for a greener television, according to the Consumer Electronics Association. In the UK, according to a 2009 Carbon Trust study, 44% of UK consumers want more information on what companies are doing to be green, but 70% do not feel confident about identifying which companies are environmentally responsible.

Several large companies and government agencies have recently announced or improved their green- or eco-purchasing policies, notably Wal-Mart5, Office Depot, Mars, Dow, Dell and the US Federal Government. In order to meet their policies, these large-scale institutional purchasers need standards, detailed information, and proof that a product is green.

The ecolabel and eco-certification landscape is currently fragmented and often confusing to institutional buyers as well as individual consumers. Marketplace confusion has grown and continues to grow due to competing claims on what makes a product ‘green’, especially when there are two or more competing schemes for the same sector or product.

Some ecolabels are regionally specific, while others are global; and some have stricter criteria than others. Compounding the problem is a lack of good quality standardized and comparable information worldwide. According to a European market research study (OECD, 2006), marketing, consumer confusion and competition between similar schemes has caused low market penetration for some ecolabels.

In late 2007, Big Room Inc., a Vancouver based company, surveyed around 270 ecolabels and published the results to a website, [www.ecolabelling.org] (now www.ecolabelindex.com). Two years later, the World Resources Institute, a Washington DC-based environmental think tank, and Big Room Inc. began discussing how to expand and update the data on ecolabelling. org into a more comprehensive ‘global ecolabel monitor’. In October 2009, with support from companies involved with WRI’s Green Supply Chain Project, the effort was launched and was sponsored by Wal-Mart, UPS and UTC with additional support from Dell, Nike, PepsiCo, Dow and Johnson & Johnson. This report summarises our findings.