This Podcast is part of the Water, Peace & Security Partnership within our Water Program. Reach out to Alberto Pallecchi for more information.

This Podcast is part of the Water, Peace & Security Partnership within our Water Program. Reach out to Alberto Pallecchi for more information.

Which parts of the world are most at risk of conflict? Four times a year the Water, Peace and Security Partnership publishes its assessment, based on the WPS Global Early Warning Tool. Each will be accompanied by a short podcast looking at the headline findings from each Quarterly Update.

In this third WPS Quarterly Update podcast, Nicholas Walton interviews Laura Birkman about Iraq. It is a country that has suffered from a bloody recent history of conflict and turmoil, but where water-related fragility is likely to exacerbate growing tensions in the south of the country, especially as the climate continues to get hotter and drier. 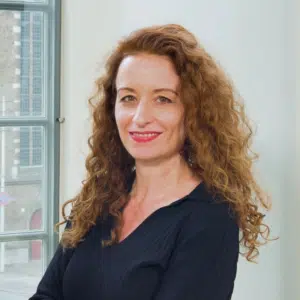 – Laura Birkman, Senior Strategic Analyst and Head of the Climate and Security Program, The Hague Centre for Strategic Studies

Hello, and welcome to the latest quarterly podcast from the Water, Peace and Security Partnership, a brief look at the areas of the world most at risk from water-related stress and conflict. In this episode, carried on WRI's Big Ideas Into Action podcast stream, the focus is on Iraq.

When it comes to water availability, water quality, it's a country that is increasingly losing grip on its resources.

Hello, I'm Nicholas Walton, and this is the third short quarterly update podcast from the Water, Peace and Security Partnership. Every three months the Partnership brings out an assessment of which parts of the world are most at risk from conflict, using its machine learning early warning tool, in the process identifying areas where those risks can be reduced. In this podcast, we're looking at one of the issues that the new update in August 2022 is raising, and that's Iraq. Here's Laura Bookman, Head of the Climate and Security Program at The Hague Centre for Strategic Studies, and a partner in Water, Peace and Security.

And the south of the country in particular has got a very distinctive kind of environment connected to water. Can you can you tell us a little bit about that, please.

So Iraq, as many people may know, is marked by a large water basin. With two rivers sort of distinguishing the region, it's lying amongst the Euphrates and Tigris rivers. Both rivers have historically a huge role. It's considered one of the most fertile regions in the world. However, the availability of water has been deteriorating rapidly in the last 30 years. And this is a result of both climate related but also manmade issues.

And in the south of the country, there are a number of waterways that then lead into the Gulf.

Yes, Iraq is downstream in the Tigris and Euphrates basin from three other countries, we're talking about Turkey, Iran and Syria. And the south of Iraq is at the very bottom end of that dynamic. So it's really the last bit or the last end, where these waterways are coming together before they reach the Gulf. And this makes it extremely vulnerable. Because everything basically upstream from the south of Iraq determines the amount of water that comes in, but also the quality of water that runs through it.

And Water, Peace and Security analysis of the area of southern Iraq, one of the big problems is water quality, and its impact on populations there.

Yes, absolutely. Yeah, maybe a good example there to cite is that in 2019, more than 120,000 people were actually hospitalised as a result of drinking very poor quality water. And this brought significant outcries from the population who felt that the government at federal but also at provincial level, were not doing enough to secure good quality water.

And what's the interplay between an issue such as that and its impact upon the population? And conflict?

So the relationship between water and conflict is complex. So we have in Water, Peace and Security researched that relationship in detail, and specifically, as you mentioned, in the south of Iraq. So we looked at Basra, we looked at Dhiqar, Maysan and Wasit. These are the four most southern and central provinces that Iraq has, and we try to identify what these dynamics between water availability, water quality, but also conflict is. And we found in our research, that there are some some significant patterns that you can see when it comes to this dynamic. And this basically involves highlighting three types of conflict or I would say, issues that lead to instability. Firstly, conflicts between provincial authorities, so those provinces I just mentioned, about water shares or illegal encroachment of water flows; but also conflicts between citizens and provincial authorities with the central government, about allocation of water, but also how the water quality for example, as I just mentioned, is managed; and thirdly, we identified that there's a lot of instability developing and even violent conflict as a result of dynamics between local inhabitants over scarce water resources. And this particular sort of dynamic involves farmers, herders and fishermen, in particular. And that dynamic is, is really getting more volatile, we see because of the informal nature of some of the local governance of water. And this is a problem that we see only increasing as the water situation in Iraq is worsening over time.

And where do you fear that this volatility and the worsening situation might lead? What are the dangers in the next 5, 10, 15, 20 years for this area of Iraq?

Well, when you look at the current developments, more broadly speaking, in Iraq, you see there is a sense that the social and economic and political situation is potentially exacerbating some of these already volatile situations. So I would argue that as long as trust and also current governance mechanisms between provincial and federal authorities do not improve, then you see more and more local dynamics taking control over issues like water. So in other words, we see that we're moving in Iraq from a situation where people or citizens look towards their authorities to develop predictable or reliable water allocation schemes and quality water allocation, to more of an informal network via tribal schemes or via sheiks that can provide some assurances that the government cannot.

And what about the trans-boundary situation for this particular part of Iraq? Obviously, it tapers in towards the Gulf, and especially towards the east you have Iran, which has long played a fairly influential role in this region.

Yes, the trans-boundary dimension remains a key factor that you know, weakens the water situation in Iraq. So there is absolutely a need for the Iraqi government but also for provincial authorities to work closely together to ensure that collaboration, when it comes to developing water sharing agreements, or bilateral schemes that also touch across border dynamics, that they continue. However, in order for Iraq to develop better long-term resistance and resilience for what will likely continue to be a deterioration of water quantity and water quality. There needs to be a better focus on national and provincial level dynamics. And this is why in Water, Peace and Security, we are looking at really strengthening the relationship at the local and also provincial level to ensure that collaboration there improves so that when it comes to developing more resilient measures, also at the cross-border level, there's a unified front that Iraq can have against these broader, more complex regional dynamics.

That was Laura Birkman of The Hague Centre for Strategic Studies. To find the full Water, Peace and Security quarterly update and more on the WPS early warning machine learning tool. Go to www.waterpeacesecurity.org or on Twitter at @waterpeacesec. That's all for now for me, Nicholas Walton. Goodbye.