This summer, Ethiopia was once again named the fastest growing global economy. Over the past two decades, this country—home to over 100 million people – has experienced rapid and impressive economic growth. This has driven real change: just 17 years ago, 56 percent of Ethiopians lived on an equivalent of less than $1.25 a day, but by 2011, that figure had dropped to 30 percent. The Ethiopian government hopes to see this progress continue as it aims to become a low-middle income country by 2025. Climate change, conflicting water demands and watershed degradation could stand in the way of this goal, particularly for the country’s poorest. Sustainable water management is essential to maintaining progress toward a prosperous future for all Ethiopians.

A Water Economy and Thirsty Development

Historically, Ethiopia’s economic prosperity has been heavily driven by rainfall and water availability. Recent periods of GDP growth and poverty reduction also coincided with periods of more reliable rainfall and greater public investment. In contrast, previous periods of drought have severely constrained economic growth and exacerbated food insecurity. Given the country’s historically highly variable rainfall patterns, the unreliability of rainfall has played a significant role in Ethiopia’s development -- and the health and growth of its children. As of 2014, 40.4 percent of children under age five suffered from stunting.  Increased water scarcity decreases crop yields, which causes food insecurity and nutritional shortcomings in the crucial early years of children. 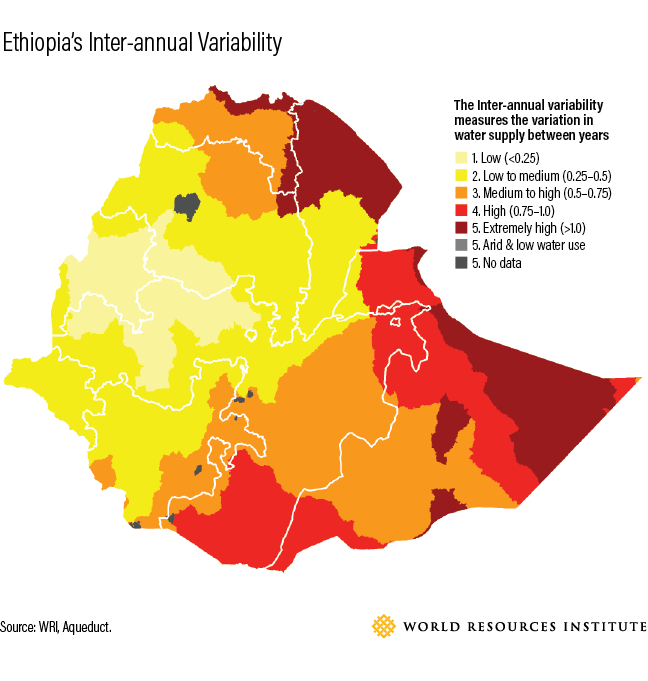 Ethiopia’s future plans for economic growth call for expansion in irrigated agriculture, manufacturing, hydropower and municipal water supply – all of which depend on reliably available water. At the same time, Ethiopia’s population is set to nearly double by 2050, increasing the country’s overall thirst. This demand for water is clustered in cities, which are home today to nearly 20 percent of Ethiopians, compared to only 6 percent in 1960. 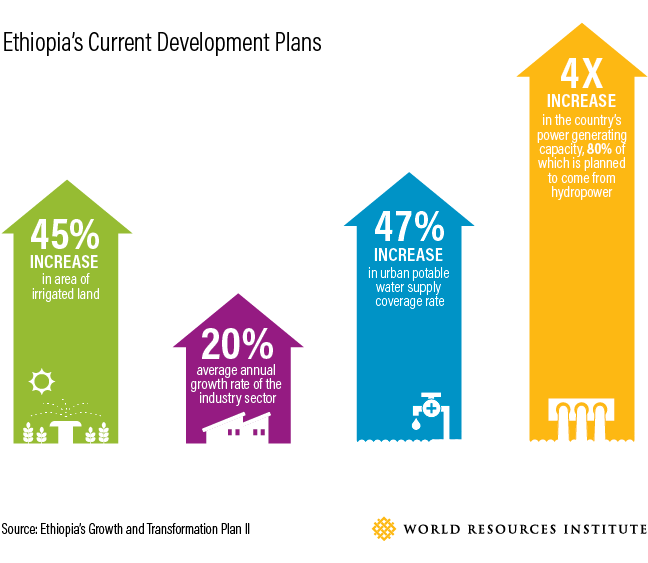 Another challenge: at the same time that development pressures, rising incomes,  and a growing population will increase water demand, climate change and natural resource degradation are reducing water supply. Recent studies estimate that  climate change and rainfall variability alone have the potential to reduce the Ethiopian GDP from 0.5 percent to 2.5 percent per year.

But these compounding water challenges need not be insurmountable. There are ways to increase water security and access in Ethiopia, while also fostering inclusive development. Efficient use and equitable distribution of water – by planning for climate change, balancing water demands and prioritizing the health of natural landscapes – can help Ethiopia reach its development goals.

Towards A Water-Secure Future

Advancing water security and economic development while reducing poverty requires a diverse set of actors. Government, the private sector, development banks and civil society all have important roles to play in developing effective water security polices and investments. The Ethiopian government’s vision is to become a low middle-income country is through green and inclusive growth. Access to water for the poorest and most vulnerable populations must be given priority during development planning, to ensure that Ethiopia’s rising economic tide lifts all boats.

Some promising solutions are already being implemented. Hundreds of thousands of rainwater harvesting systems have been installed across the country, helping to collect runoff for small scale irrigation in times of water scarcity. In the Amhara region, a partnership of research organizations, the Geological Survey of Ethiopia and local communities are building a program of participatory mapping and management of shallow groundwater—which can help improve access to this precious resource. In regions such as Tigray, communities have brought water back to previously parched lands through watershed restoration. Ethiopia is working to scale up this solution: the government committed to restore 16 million acres of degraded land – equivalent to one-sixth of the country’s total land area — by 2025. If the restoration programs are designed to yield water benefits, this could contribute significantly to improving water security.

Ethiopia isn’t the only country working to balance economic growth and poverty reduction with sustainable water management. Most of the world’s most water-stressed countries are developing economies, and many are set to face further water stress in the coming years. As countries grow and develop amidst a changing climate, it’s important to keep sharing solutions for tackling water scarcity in order to protect lives and livelihoods around the world.  At the Global Green Growth Week 2017: Unlocking Africa’s Green Growth Potential, leaders from around the world will discuss how to ramp up sustainable and inclusive development. WRI will co-host a session on Sustainable Water Management in Ethiopia as a Lever for Green Growth on October 17 at the United Nations Conference Center in Addis Ababa, Ethiopia.

For Ethiopia, continued economic growth will depend upon wise management of its water resources and can be done in ways that are environmentally sustainable and don’t exclude vulnerable populations. By continuing to scale up smart solutions and promoting water-centered development, this country can tackle economy, environment and equity issues at the same time.

3 Strategies for Water-Wise Development in Ethiopia

Water for Sustainable Development in Ethiopia