What to Know About Seagrass, the Ocean’s Overlooked Powerhouse

When most people think of coastal ecosystems, they think of mighty mangrove forests and colorful coral reefs. But these ecosystems are only the tip of the iceberg — there’s more beneath the surface, specifically seagrass.

Seagrasses provide humans with countless goods and services — everything from food security to shoreline protection to clean water. They are found in almost every sea around the world, with more than 1 billion people living within 100 kilometers of seagrass meadows. Yet most people are unfamiliar with the many benefits these plants provide to humans and animals alike.

Here, we answer key questions about seagrasses: What are they, where are they and why are they important? Let’s dive in.

Despite its name, seagrass isn’t actually a true grass — in fact, seagrasses’ closest terrestrial relatives are lilies and orchids. Most species of seagrass superficially resemble terrestrial grasses, in that they sometimes have long, narrow leaves and grow in meadows. However, seagrasses can have several different leaf shapes — including oval, fern and ribbon — and lengths that can range from the size of your fingernail to as long as 7 meters.

The world’s 72 species of seagrass are the only flowering plants, or “angiosperms,” that can live underwater. Like other angiosperms, they produce flowers, seeds and pollen, with crabs and shrimp playing the role of the pollinators, as bees and other insects do on land.

Seagrasses can form extensive or patchy meadows that consist of just one or multiple species of seagrass. In the Indian and western Pacific tropical waters, for example, as many as 14 seagrass species can grow together.

Is seagrass the same thing as seaweed?

Seagrass is oftentimes confused with seaweed, but there are many important differences between the two.

Evolutionarily, seaweed is a relatively primitive group of marine photosynthetic organisms, whereas seagrasses are flowering plants that evolved from life in the ocean, to the land, and back to the sea about 100 million years ago. This land-to-sea evolution is what makes seagrasses the only true plants found in the ocean.

Seagrass and seaweed also differ in the way they look, reproduce, and transport and exchange nutrients with their surrounding environment. There are around 72 species of seagrass, compared to 5,000-6,000 species of seaweed.

Where is seagrass found?

Seagrasses grow mainly in shallow marine and brackish waters around the world, occupying tropical, temperate and even Arctic areas. They’ve evolved to thrive where few other plants could survive.

Seagrasses are found in 159 countries across six continents, but their total extent is poorly mapped. While the most up-to-date global seagrass area is estimated at 160,000 km2, other estimates based on distribution models suggest the true area could be closer to 600,000 km2 — an area almost the size of France.

Why is seagrass important?

Seagrasses are important because they contribute to human health and well-being in myriad ways. For example, seagrasses provide: 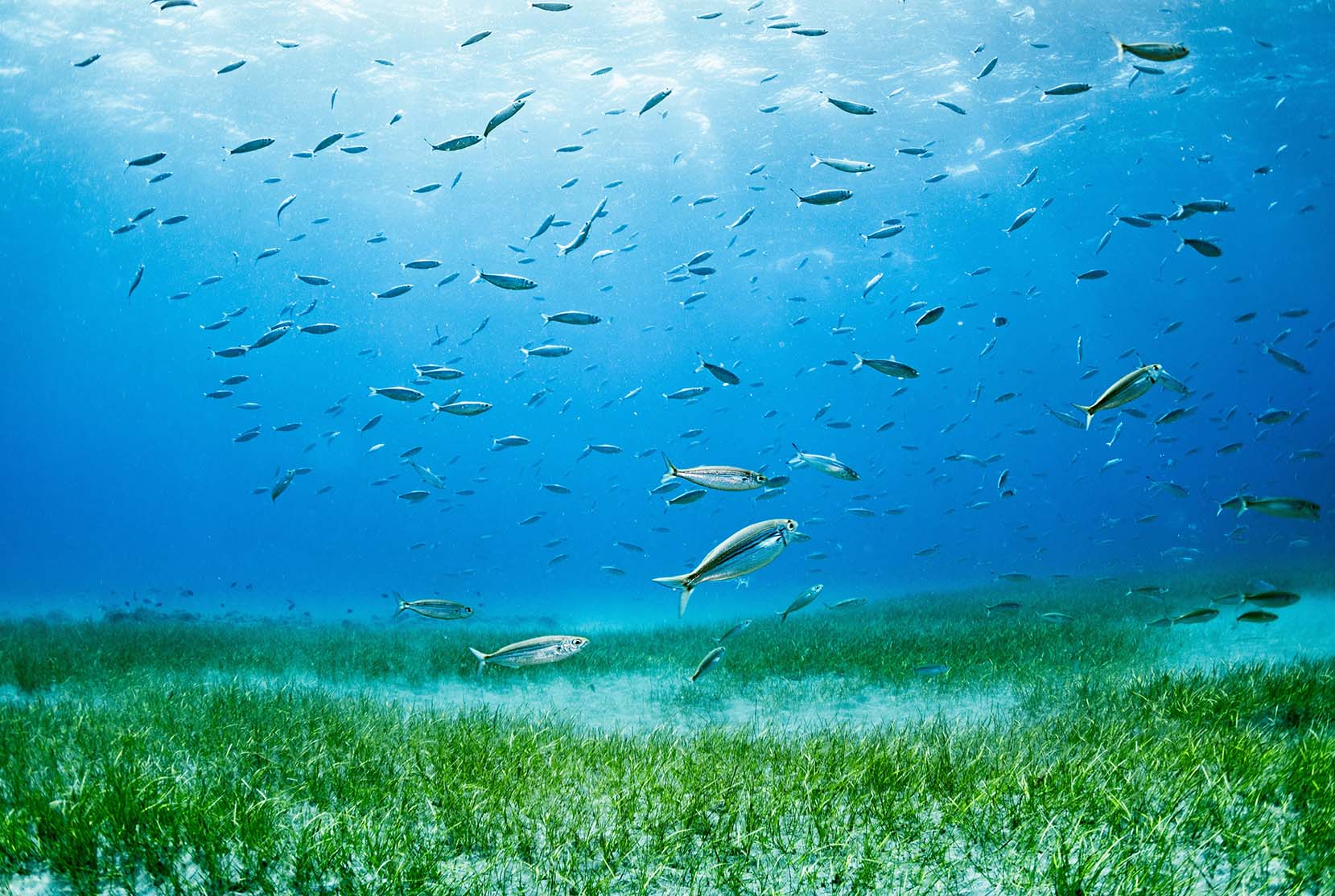 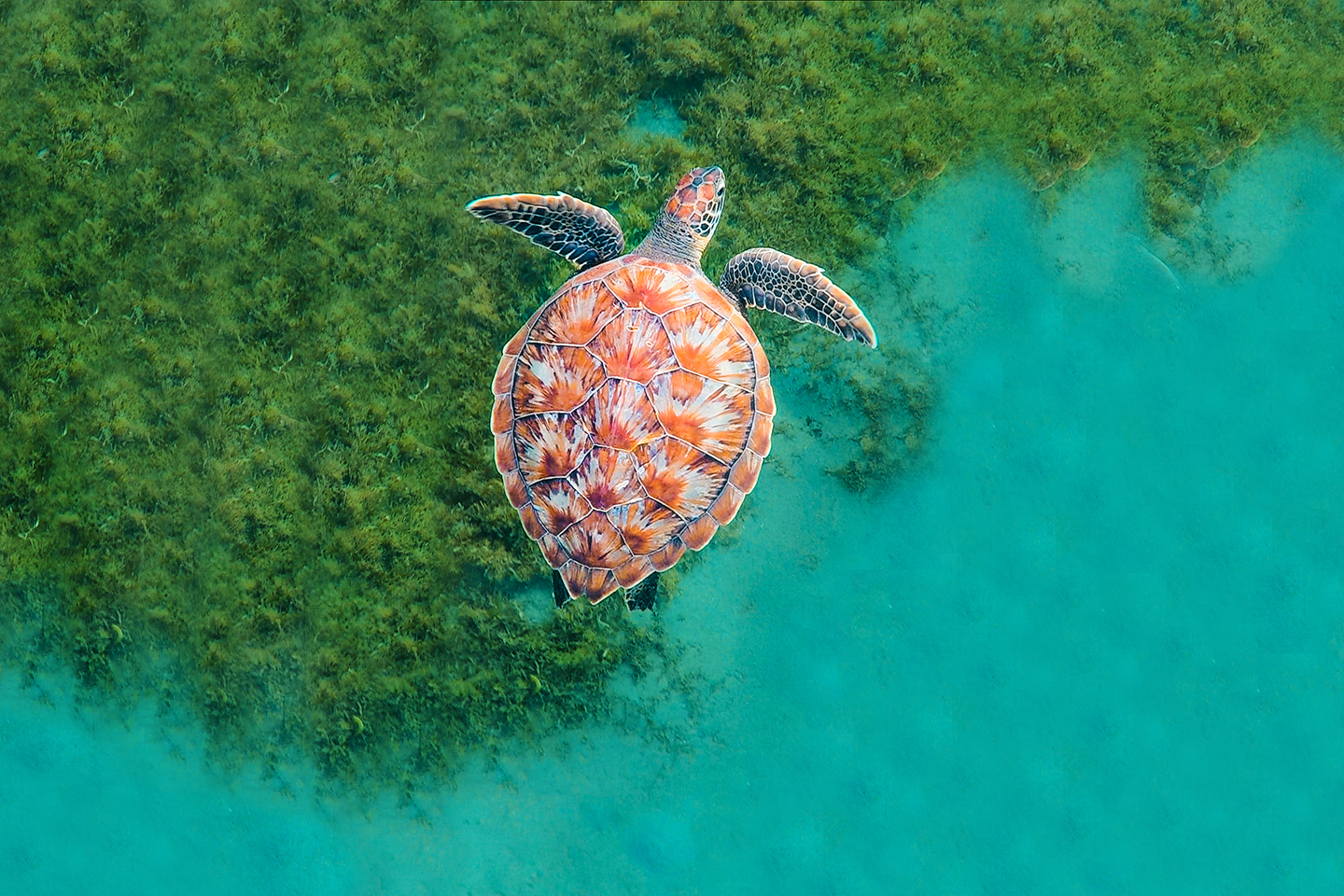 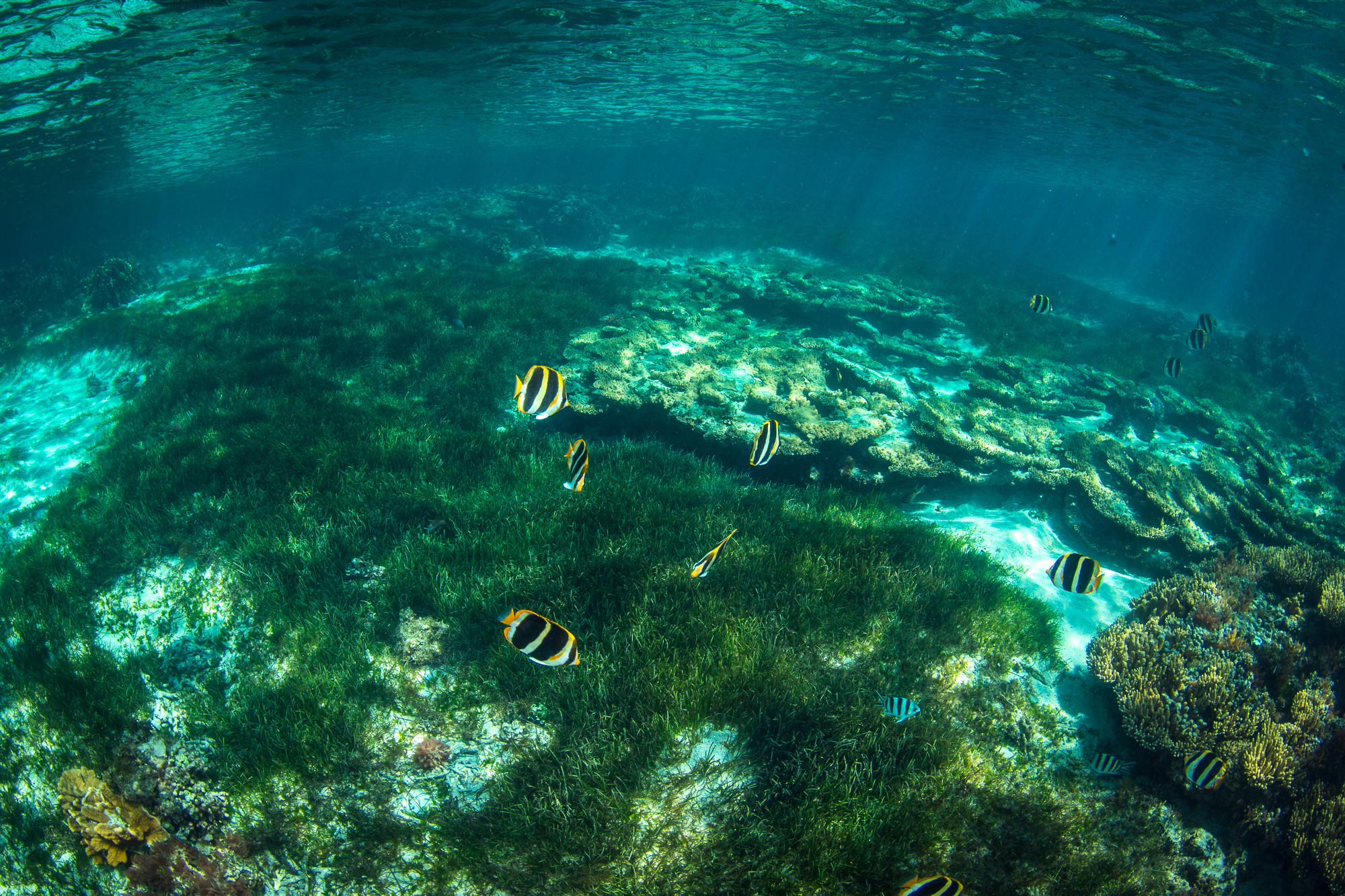 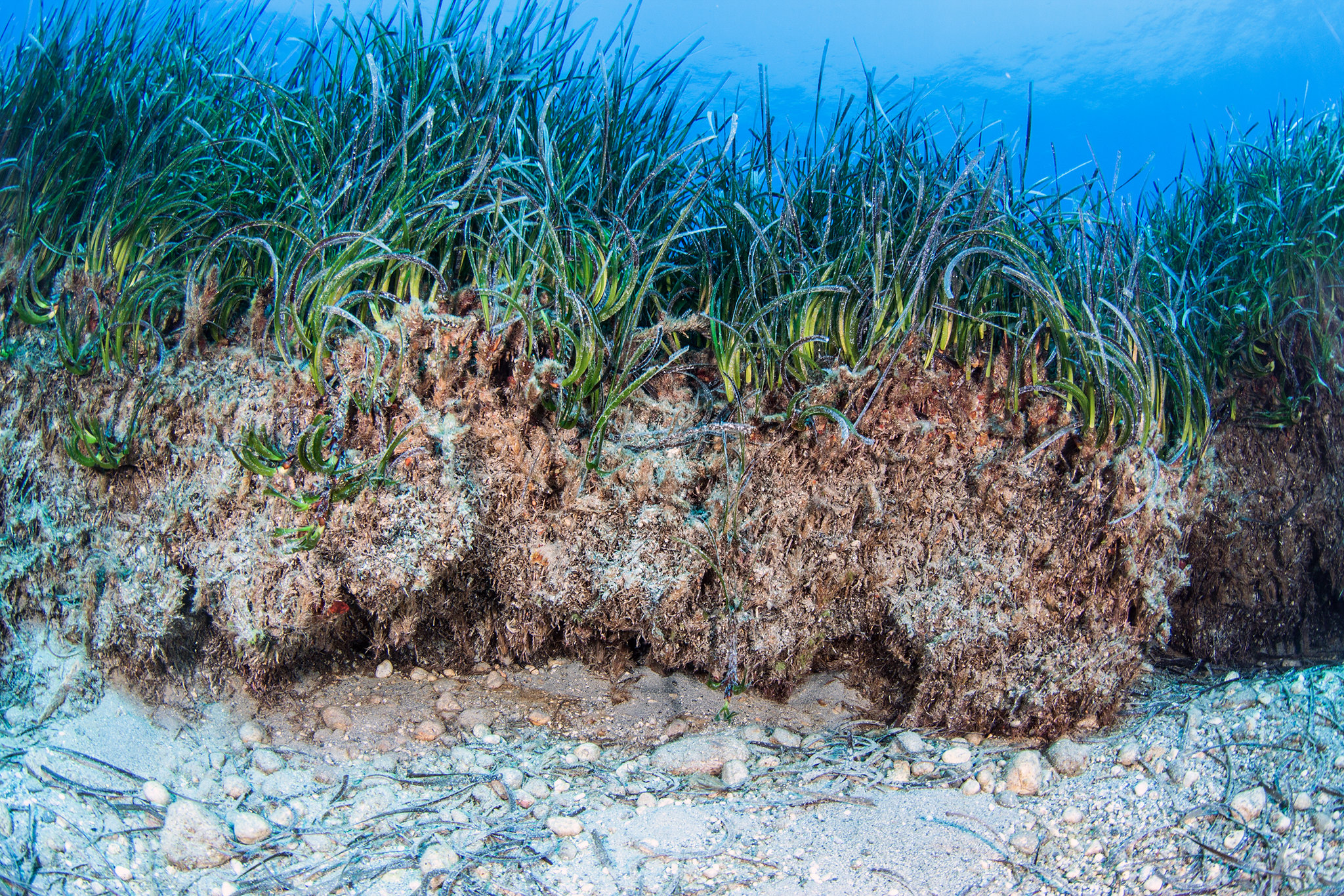 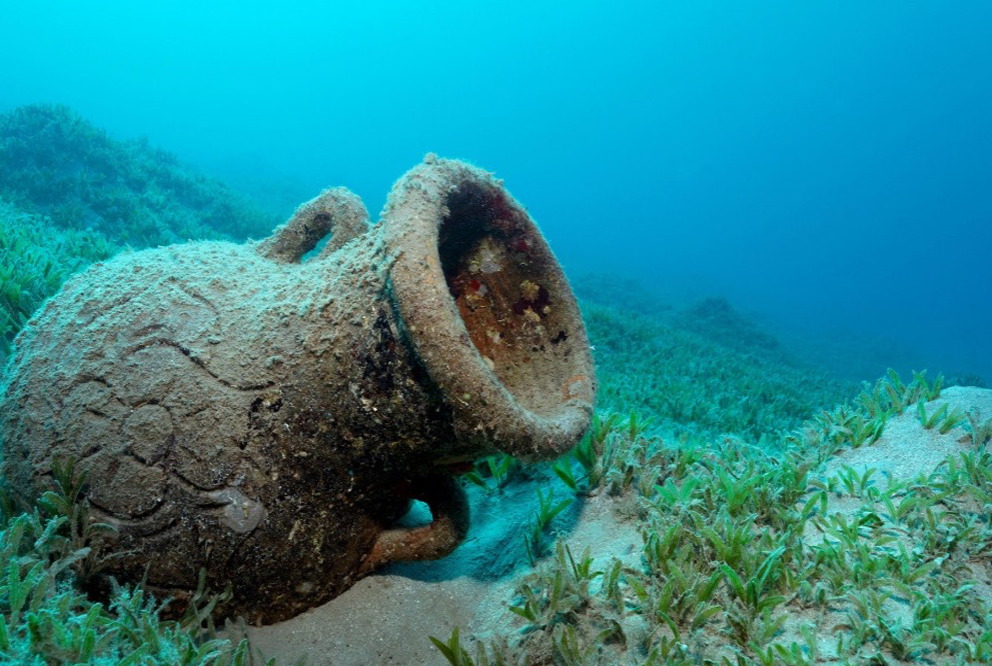 Food security: Seagrass meadows are important nurseries for young fish, providing them with food and protection from predators. Seagrasses support an estimated 20%of the world’s biggest fisheries, including walleye pollock, the planet’s most-caught species. In the Mediterranean alone, seagrasses contribute at least €200 million ($218 million) to both commercial and recreational fisheries annually. The loss of seagrass habitat is linked to rapid declines in fish stocks and subsequent economic losses.

Biodiversity protection:The provision of shelter, food and nursery grounds are critical ecosystem services delivered by seagrasses worldwide, as evidenced by the abundance of animals found in the meadows. These include threatened, endangered or charismatic species such as dugongs, sea turtles, seahorses and sharks.

Clean water provision: Seagrasses remove excess nutrients, produce antibacterial and antifungal materials, and alter the chemistry of water and sediment. In doing so, they reduce humans’, animals’ and ecosystems’ exposure to bacterial pathogens in seawater by 50%.

Coastal protection: Seagrass leaves soften the force of waves by about 40%, while their network of roots and stems trap sediment on the sea floor. By reducing the force of waves and trapping sediment, seagrasses can protect coastal communities from storm surge and erosion, a benefit especially important for adapting to rising sea levels.

Preservation of historical artifacts: Sedimentary deposits under seagrass meadows can be up to 6,000 years old, making these sea floor layers an archive of human cultural development over time. Everything from Roman and Phoenician shipwrecks to prehistoric settlement sites and submerged ancient cities have been found beneath seagrass meadows.

Just like forests on land, seagrasses are excellent at absorbing and storing carbon, which can help reduce the impacts of climate change. Globally, seagrasses store 19.9 billion tons of organic carbon, as much as is stored in the world’s marine tidal marshes and mangrove forests combined, the two other main parts of blue carbon ecosystems.

However, lost or degraded seagrass meadows not only lose their ability to trap carbon, they also gradually release already-stored carbon. Emissions from seagrass degradation globally could reach 0.65 gigatonnes per year — equivalent to yearly emissions from the entire global shipping industry.

Accounting for seagrasses’ climate change mitigation and adaptation benefits is important for encouraging policies that protect and restore such ecosystems. For example, to date, 16 countries include an explicit reference to seagrasses in their national climate plans, known as “nationally determined contributions (NDCs).”

Are seagrasses under threat?

Despite their value, seagrasses have been declining globally since the 1930s and are currently disappearing at a rate of 7% per year — faster than any other coastal ecosystem, such as mangroves (1-3% per year) or salt marshes (1-2% per year). Between 1970 and 2000, their extent decreased by more than 10% per decade. Of the world’s 72 known seagrass species, 22 are in decline and three are endangered.

The shallow coastal areas that seagrasses typically occupy are often the same places that attract industrial and recreational activities. Water pollution, coastal development and unregulated land management are all culprits. Many of these pressures can be visualized on WRI's Ocean Watch data platform.

Some impacts are incidental, like physical damage from fishing vessels. Others are deliberate, such as reclamation of areas for coastal development or removal of seagrasses to create clear, sandy lagoons and beaches that appeal to tourists. In addition, seagrasses are increasingly threatened by climate change. Higher water temperatures can cause physiological stress and death, while rising seas can limit the sunlight that seagrasses need to grow.

But the lack of public awareness of seagrasses’ value and even existence are arguably the greatest threats to their conservation. Most people simply don’t understand the important role seagrasses play in societies and economies.

Onto Bluer Pastures: The Importance of Raising Awareness About Seagrass

Despite a general global trend of seagrass loss, there is reason for hope. Some areas have successfully stemmed the decline or even rehabilitated seagrasses. Many solutions exist — management measures that regulate nutrient loads and improve water quality, limiting destructive fishing gear and practices, installing seagrass-friendly mooring, and increasing signage in seagrass-dense areas, just to name a few. We need multiple strategies that can provide top-down support for bottom-up action that halts the degradation and destruction of seagrass meadows.

The countries on the High Level Panel for a Sustainable Ocean Economy made explicit reference to the protection and restoration of seagrasses in their Transformations for a Sustainable Ocean Economy, an ocean action agenda for the next decade. This high-level recognition of seagrasses as critical marine ecosystems plays a vital part in safeguarding them for generations to come.

Raising awareness is also a critical starting point. Since 2001, the U.S. state of Florida has designated March as “Seagrass Awareness Month.” In recent years, seagrass scientists have also mounted social media campaigns on March 1st, explaining why seagrasses are important and should be protected. Establishing a formally designated World Seagrass Day could help bring seagrasses further into the collective consciousness and galvanize public support for their protection and restoration.

Thanks to increased public awareness, plastic pollution has become a global issue, with communities, governments and industry taking action to tackle it all over the world. Seagrasses are critically important to the planet and people everywhere. By raising awareness of their importance, we are one step closer to giving them the protection they deserve.