Tracking 2020 Climate Action Pledges on the Road to Paris

In the lead-up to this year’s December climate summit in Paris, countries from around the world are proposing climate actions that will take effect after 2020, known as intended nationally determined contributions. Switzerland and the European Union were the first two proposals submitted to the United Nations Framework Convention on Climate Change (UNFCCC), with more expected by the end of March and many others to follow.

To track those pledges, WRI is releasing the CAIT Pre-2020 Pledges Map, a new module on the CAIT Climate Data Explorer that profiles country mitigation pledges made in the run-up to and during climate talks in Copenhagen in 2009 and Cancun in 2010. The interactive web portal showcases data from 15 developed and 58 developing countries in a uniform way to help users understand and assess countries’ pre-2020 pledges.

Why Are 2020 Pledges Important?

Achieving and even exceeding the Copenhagen and Cancun pledges is essential. A recent report from the United Nations Environment Programme shows that even if countries meet their 2020 pledges, a gap of 8 to 10 gigatons of greenhouse gases would remain between actual 2020 emissions and where emissions need to be in 2020 in order to be on a least-cost pathway to limit global warming to under 2 degrees C (3.6 degrees F) from pre-industrial levels. The sooner emissions are cut, the lower the risks of dangerous climate change impacts, high adaptation costs and carbon-intensive infrastructure that is locked in for decades.

To embed in your site copy:

In support of the global goal to limit the rise in global average temperature below 2 degrees C in comparison to pre-industrial levels, developed countries committed to quantified, economy-wide emissions-reduction targets, of which nearly 32 percent are framed in greenhouse gas terms only, shown above. Developing countries submitted a diverse range of nationally appropriate mitigation actions, such as economy-wide goals, mitigation policies and actions in different economic sectors. The Pre-2020 Pledges Map allows users to visualize select data directly on the map, such as greenhouse gas reduction pledges by type. 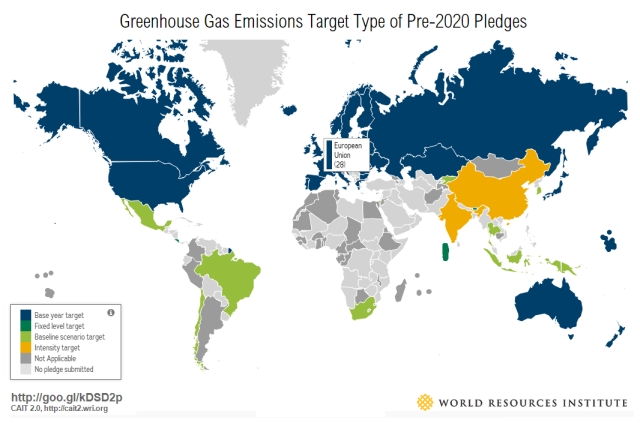 During the past few years, developed and developing countries have been in the process of implementing their pledges—through initiatives such as the U.S. Climate Action Plan, China’s 12th Five-Year Plan and Brazil’s National Policy on Climate Change—and will continue to do so through 2020. These types of on-the-ground measures are crucial for countries to meet their pledges to mitigate climate change. Another recently launched web tool,

Although country targets and actions were put in place before and during Copenhagen and Cancun, there was a lack of information on the assumptions included in the emissions-reduction pledges. For example, for some developing country pledges that were framed in reference to a baseline scenario, there was a need to clarify the methodology and assumptions for calculating the country’s business-as-usual emissions in the future. Moreover, it was difficult to understand the effects of some developed country pledges, caused by a lack of common accounting rules and little clarity, for example, on the use of units (including quality of units and possible double counting of units) and the impact of the land sector on the pledge. Although the UNFCCC Secretariat organized workshops to further explore the content of pledges, there remained a need for additional detail.

The Pre-2020 Pledges Map can help fill this need for more clarity, providing links to government submissions to the UNFCCC that contain additional information to help understand targets and actions. The map also provides a summary of each country’s pledge details and displays information on pledge type, greenhouse gas target type and sectors/gases covered. This type of transparency can ease efforts to assess and compare country pledges at the domestic and international levels.

A related CAIT module called the Paris Contributions Map will be launched later this week to catalogue countries’ proposed post-2020 climate action shortly after they submit their plans. It will let users review qualitative information about climate action plans, including sector coverage, greenhouse gas target type, base year/period and more. In advance of the Paris meeting, the tool will enhance transparency and can provide official (e.g., UNFCCC) as well as unofficial review processes with a standardized data set that can be used for further assessment of climate action plans.

Focusing on Pre-2020 on the Pathway to Paris

As countries set their sights on reaching a globally binding climate agreement in Paris, the Pre-2020 Pledges Map can provide an understanding of what countries have committed to in the short term, and what can be built upon in their post-2020 plans. In the next five years, countries have a short window of opportunity to lower the risks associated with climate change by delivering on or surpassing their existing emissions reduction pledges. Clear and focused discussions that include details on assumptions related to emissions reductions pledges are essential.