A Tale of 3 Countries: Water Risks to Global Shale Development

The shale gas revolution, which began nearly 10 years ago in the United States, is poised to spread across the globe. For many countries, shale gas could strengthen energy security while cutting emissions.

But unlocking this massive resource comes with a significant environmental risk: access to freshwater for drinking, agriculture, and industrial use. Drilling and then hydraulic fracturing each shale gas well uses large volumes of water for short periods of time—between 7 million and 25 million liters (1.2 million and 6.6 million gallons).

China is already the world’s largest energy producer and consumer. It has the world’s largest technically recoverable shale gas resources, but those resources are located in areas of highest water stress. Over 60 percent of Chinese shale resources are in areas of high to extremely high baseline water stress or arid conditions. The government and energy companies are already grappling with the issue. Last week, China’s two largest energy companies upgraded their forecasts for shale investments, even as the Chinese government halved its shale gas production targets earlier last month. As the world’s largest greenhouse gas emitter, the country’s shale resources could be a key to addressing climate change, but its water concerns must be addressed. 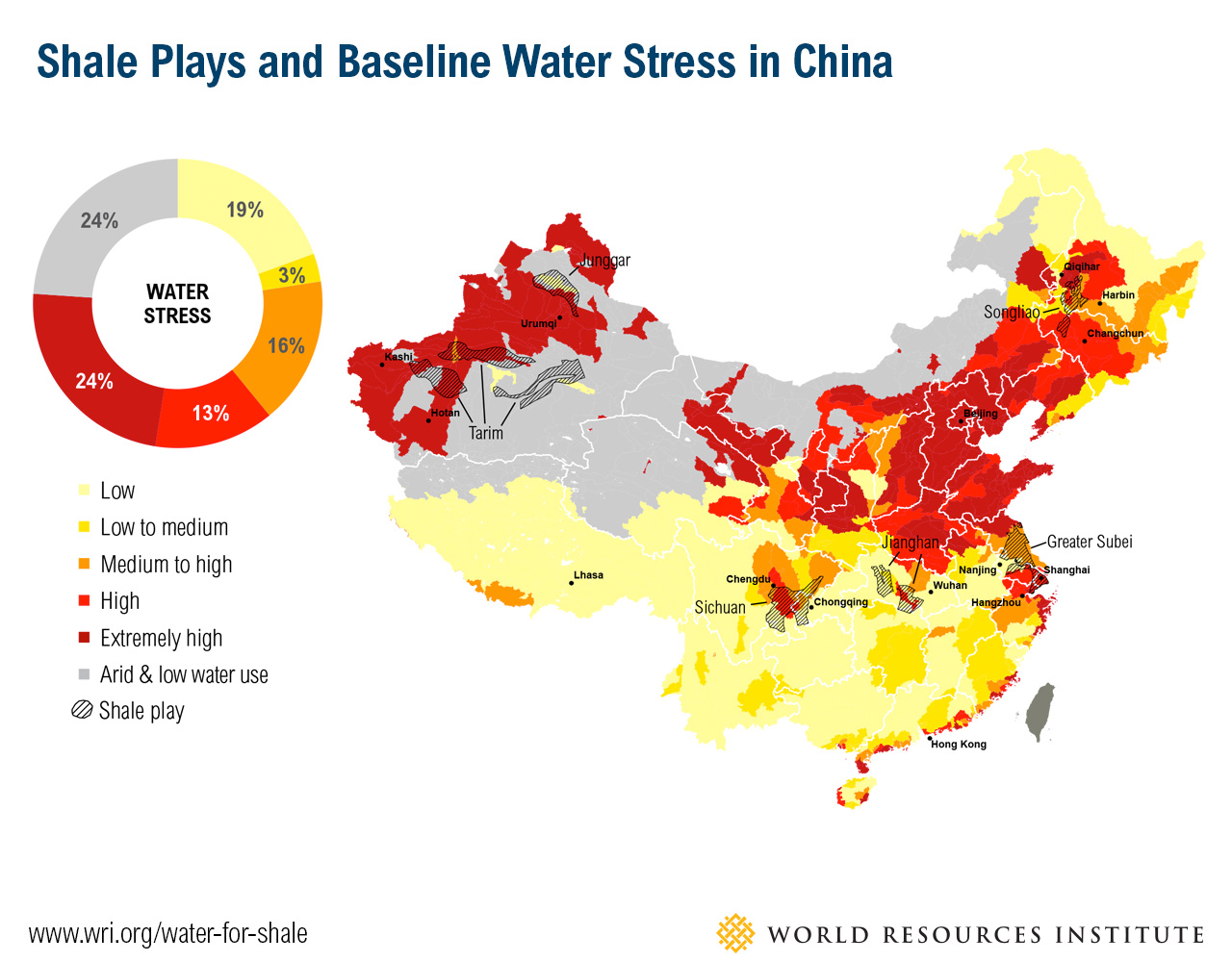 Argentina is South America’s largest natural gas producer and consumer, and possesses the world’s second-largest technically recoverable shale gas resources. With low to medium stress over 72 percent of its shale resources, competition for water is less concerning to Argentinian plays overall. However, 28 percent of the resources are in arid areas, so the country will not entirely escape water-related constraints if shale development progresses. A partnership with Chevron helped more than triple production in a shale basin called the Neuquén from last year to this year. 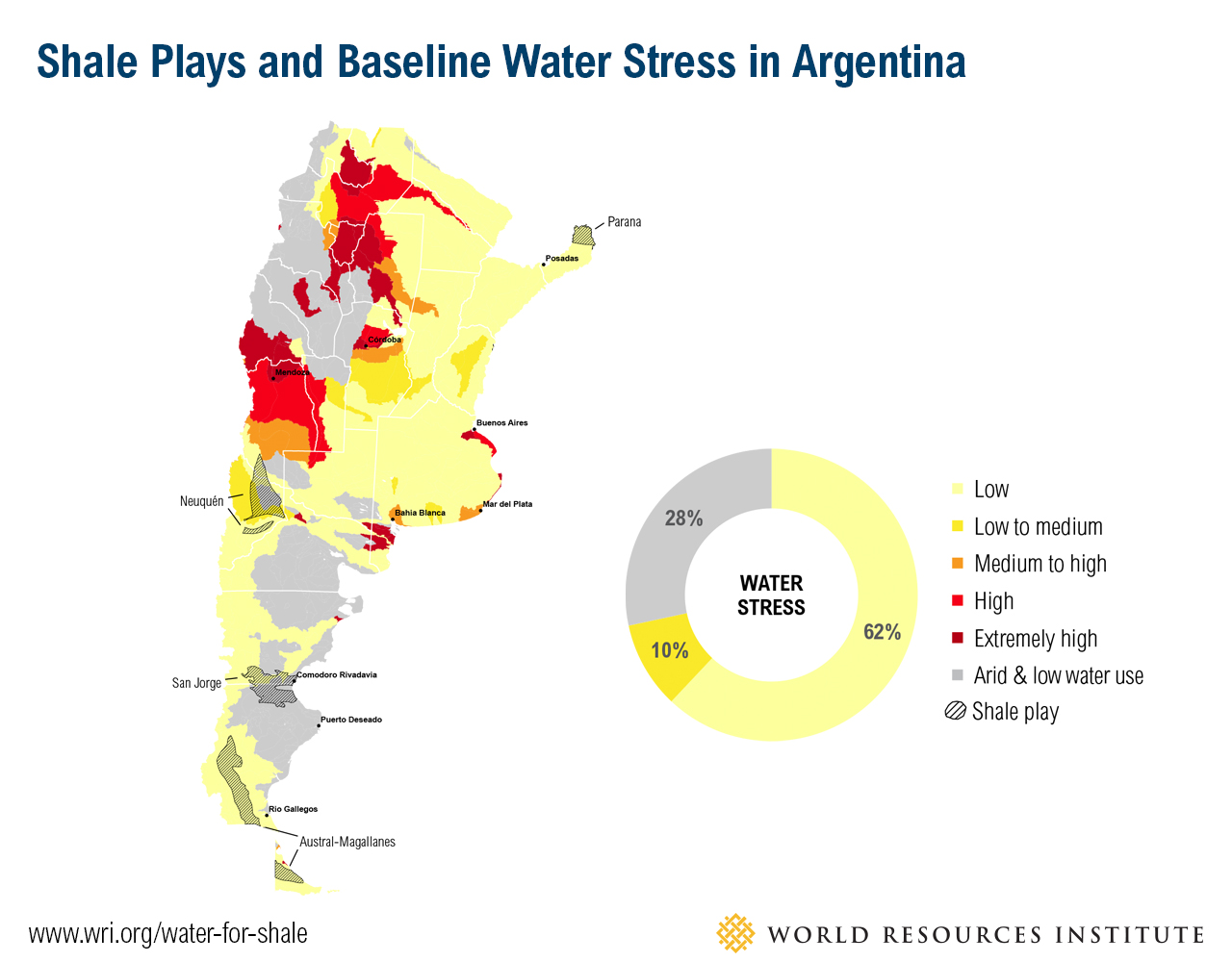 The U.K. is Europe’s third-largest natural gas producer. Industrial water use accounts for more than 30 percent of the nation’s total water demand, but those withdrawals have been shrinking for the past 10 years as natural gas and oil production declines. The government is now, however, offering tax breaks to boost shale development, and will need to manage water-related risks if shale drilling and hydraulic fracturing expands. High industrial and domestic demands for water push 34 percent of the UK’s shale resources into high to extremely high water stress, making public concern and conflict around hydraulic fracturing more likely. In July, a report by two scientific groups cited widespread concern over hydraulic fracturing’s safety, so tension is already emerging. 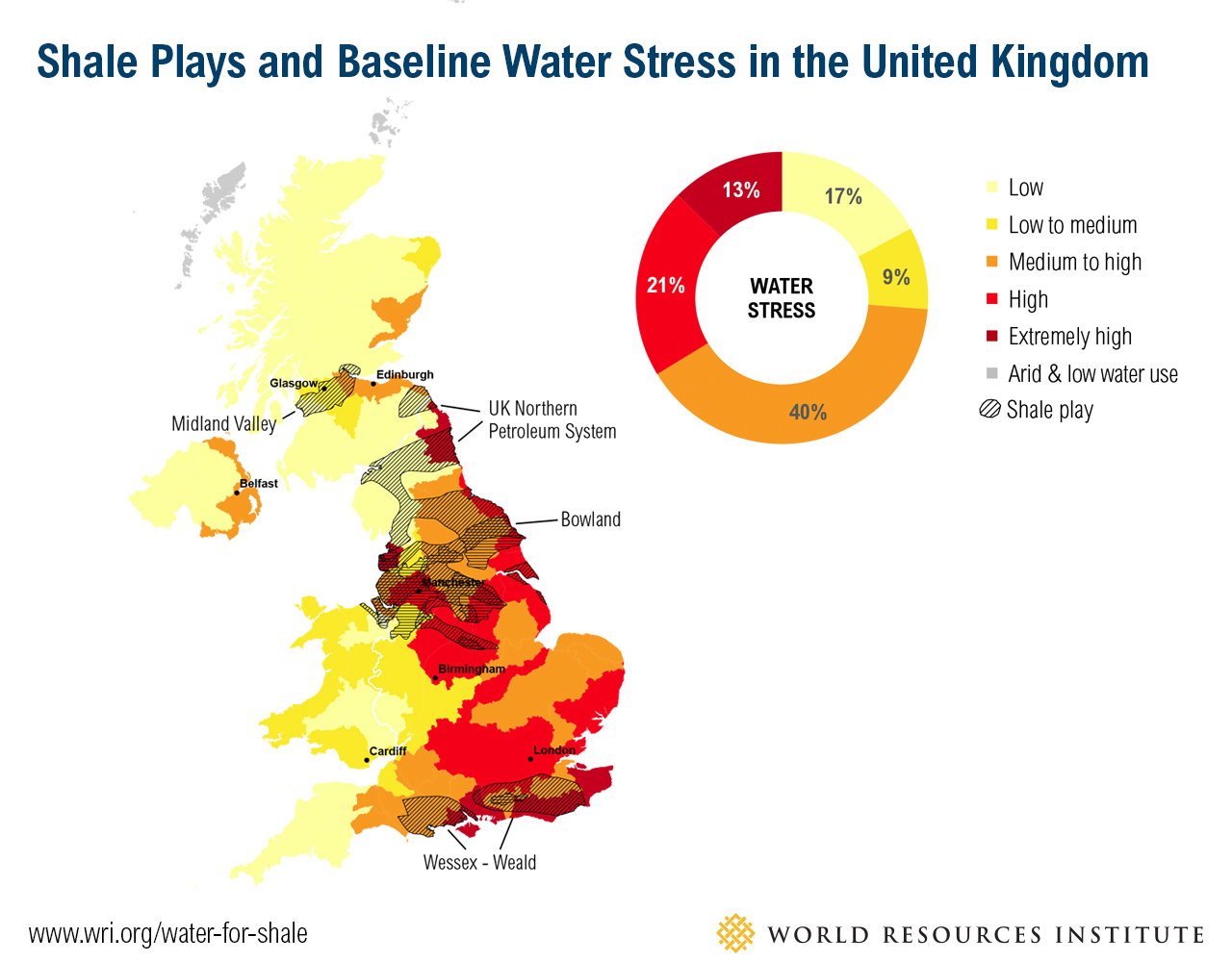 This water-shale energy trade off poses significant social, environmental and financial challenges. And over time, competition for water as well as public concerns over hydraulic fracturing will likely increase as shale development expands internationally and global temperature and precipitation patterns shift.

Every country contemplating shale development will share a common concern for access to freshwater, but it’s important to consider the localized factors that make every well unique. Global Shale Development also evaluates water availability for each shale play in 8 other countries either developing shale resources or most likely to develop them in the future: Algeria, Australia, Canada, Mexico, Poland, Saudi Arabia, South Africa, and the United States.

What Can Companies and Governments Do?

To start assessing water-availability risks to shale plays in your country or portfolio, contact the Aqueduct team.