The Roadmap to Decarbonization Won’t Go Far without Land

This article was originally posted on Global Forest Watch.

A decarbonization roadmap recently published in Science outlines decadal targets that put into perspective the monumental progress we need to make to achieve net zero carbon emissions by 2050 and keep warming below 2 degrees C (3.6 degrees F). The authors detail specific measures and incentives for the energy and transport sectors, but the agriculture and forestry sector, the third major component of the roadmap, is offered comparatively few concrete actions—reflective of its overlooked status within the global climate dialogue.

The importance of transforming the land sector to help meet the 2 degree C goal cannot be overstated. Today, emissions from agriculture and land use change account for nearly a quarter of all human-caused emissions. At the same time, forests soak up one-third of the fossil fuel emissions we emit every year and could pull even more. That means the land sector can be both decarbonized (reduce emissions) and recarbonized (pull carbon out of the atmosphere and back into forests and landscapes) for a twofold gain.

But progress in sustainable land use has remained stagnant. For example, despite substantial investments over the past decade to reduce tropical deforestation, the largest single source of land-based carbon emissions, these efforts have failed outside of Brazil. Overall emissions trends from deforestation during the 21st century have remained frustratingly flat. 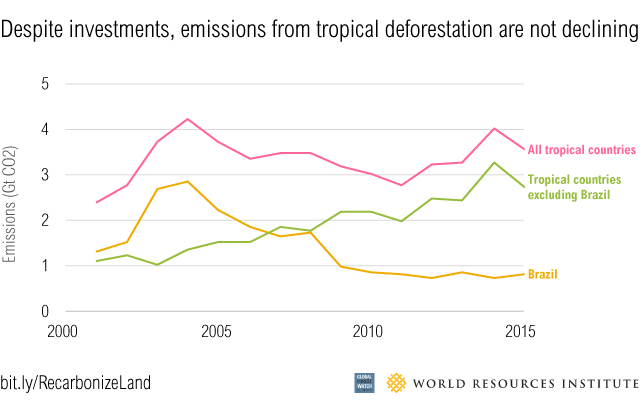 Source: SEEG and GFW Climate. Deforestation is defined as tree cover loss within primary forests in Indonesia and the Democratic Republic of Congo, outside of plantations in Malaysia, and in areas with >25 percent tree cover everywhere else. Emission estimates reflect the loss of above- and below-ground biomass.

If we are serious about zeroing out carbon emissions by 2050, we can’t leave the land sector behind. Here are four concrete actions we need to take.

Peat is soil that has accumulated large amounts of carbon over centuries. It’s also a popular target for oil palm expansion in Indonesia. When peatlands are drained to prepare new land for planting, carbon in the soil is released. Globally, peatland drainage accounts for 32 percent of cropland emissions despite producing just 1.1 percent of total crop calories. Drainage also makes peatlands more susceptible to fire, which can lead to uncontrollable outbreaks. One way to achieve large and immediate emission reductions in the land sector is to support implementation of Indonesia’s new and strengthened law to conserve and restore its peatlands.

As incomes rise around the globe, people are rapidly converging toward Western-style diets high in calories, protein and animal-based foods such as meats and dairy. This has large implications for land-use change, since meat and dairy production requires more land than plant-based proteins like beans and lentils. Beef, in particular, requires more land and generates more emissions per unit of protein than any other commonly consumed food. Reducing beef consumption among wealthier populations is essential to achieving climate goals, yet the Food and Agriculture Organization projects that global demand for beef will increase 95 percent between 2006 and 2050.

Simply reducing our beef consumption can go a long way. Cutting our meat and dairy consumption in half can nearly halve our dietary carbon footprint, and if whole populations shifted their diets away from beef, it could free up 300 million hectares (740 million acres) of land—an area nearly the size of India—and reduce agricultural pressure on forests. Diet shifts along with reducing food loss and waste as well as sustainable intensification of crop and livestock production, can together bring agricultural emissions in line with a 2 degree C pathway. 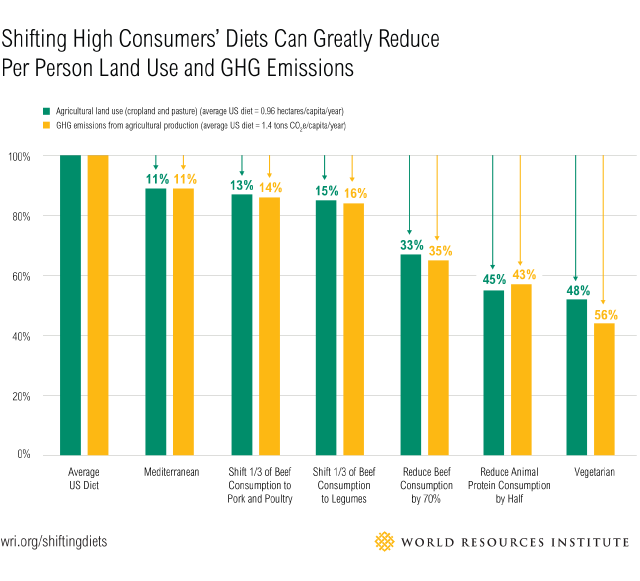 After 2030, the decarbonization roadmap calls for the construction industry to use emissions-free concrete and steel or to replace those materials with zero or negative emissions substances like wood. Wood can have a lower carbon footprint than concrete or steel and can support taller buildings, reducing pressure on land in the form of urban sprawl. However, climate benefits are lost if wood is not sourced from land that will re-absorb as much or more carbon by 2050 as was emitted during its harvesting and production. Some sustainably managed forests are already carbon neutral or carbon negative, but this isn’t the case everywhere. Globally, overharvesting of wood is causing emissions in the short-term as well as a decline in the longer-term carbon removals that must be sustained and enhanced to remain below 2 degrees C. To help achieve net zero emissions by mid-century, sustainability schemes for products made from forest biomass must require carbon neutrality for certification.

2040-2050: Reap the benefits of forest and landscape restoration

The world will continue to need more land to produce food, fuel and other agricultural products. Land available for the sole purpose of carbon sequestration is likely to be limited and comes with significant social, ecological and economic implications that can be positive or negative. Taking advantage of opportunities that provide net economic and social benefits in addition to climate mitigation can alleviate some of the tension between growth and sustainability. But any land restoration strategy—such as replenishing carbon in agricultural soils or increasing carbon stored in trees—takes time and must begin now.

Over the past decade we’ve seen positive signs that the world is on track for rapid transformation of the energy sector, but these signs aren’t yet evident for the land sector. Few climate change policymakers have paid adequate attention to the specifics of the land use challenge ahead of us, and political signals have thus far failed to catalyze the land reforms necessary at the scale needed to achieve climate action. These examples alone will not bring us to net zero carbon emissions by 2050, but if we want to follow the decarbonization roadmap, land must be considered more explicitly within an integrated, cross-sectoral mitigation framework.

When a Tree Falls, Is It Deforestation?