Restoration Pledges in NY Declaration on Forests: Where Are the Opportunities?

At the UN Climate Summit last month, an unprecedented alliance of governments, companies, and civil society issued the New York Declaration on Forests, which, among other things, pledged to restore 350 million hectares of deforested and degraded landscapes by 2030, an area larger than India. This pledge complements and extends the Bonn Challenge, an existing global effort to restore 150 million hectares by 2020.

These commitments are a huge step forward for Forest Landscape Restoration, which aims to restore productivity to degraded landscapes by re-introducing trees, agroforestry, climate-smart agriculture, and improved soil and water management techniques. The payoff is potentially enormous – recent research suggests that restoring 350 million hectares by 2030 could generate $170 billion per year of net benefits from watershed protection, agricultural productivity, and forest products, not to mention sequestering billions of tons of carbon from the atmosphere. 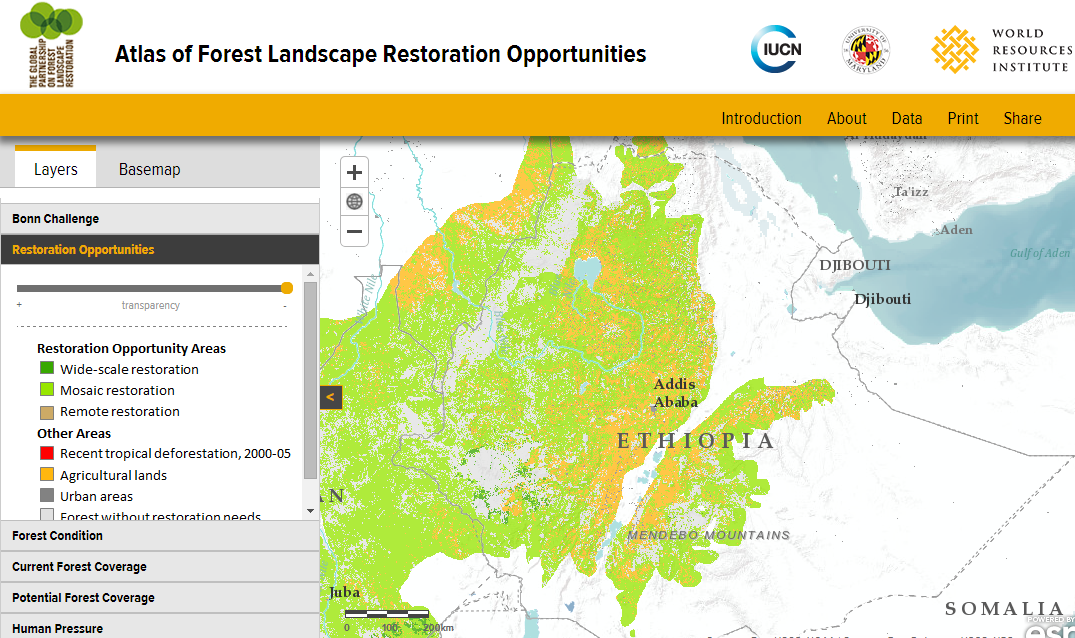 Ethiopia committed to restore 15 million hectares of degraded land—an ambitious commitment that encompasses more than one-sixth of the country’s total land area. In fact, Ethiopia has already transformed itself from a country prone to drought and famine after the loss of nearly 97 percent of its native forests to a world leader in restoration, investing heavily in agroforestry and soil management in regions like Tigray and 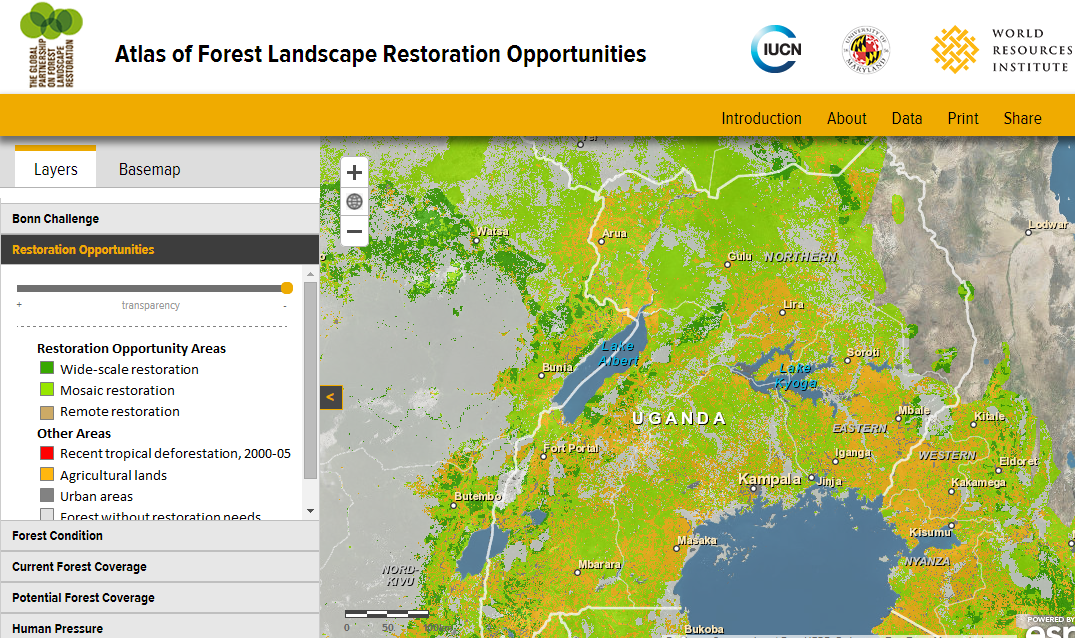 Although considerably smaller than Ethiopia at 20 million hectares, Uganda committed to a full 2.5 million hectares of restoration. Located in East Africa’s Great Lakes region, where conditions are highly suitable for humid tropical forests, much of Uganda is a biodiversity hotspot. Its home to a population of about 5,000 chimpanzees, which would certainly benefit from expanded habitat and reduced pressure. Uganda is also a relatively densely populated country, largely dependent on agriculture, which means that much of the opportunities for restoration will occur within a “mosaic” landscape of trees and agriculture.

Democratic Republic of the Congo 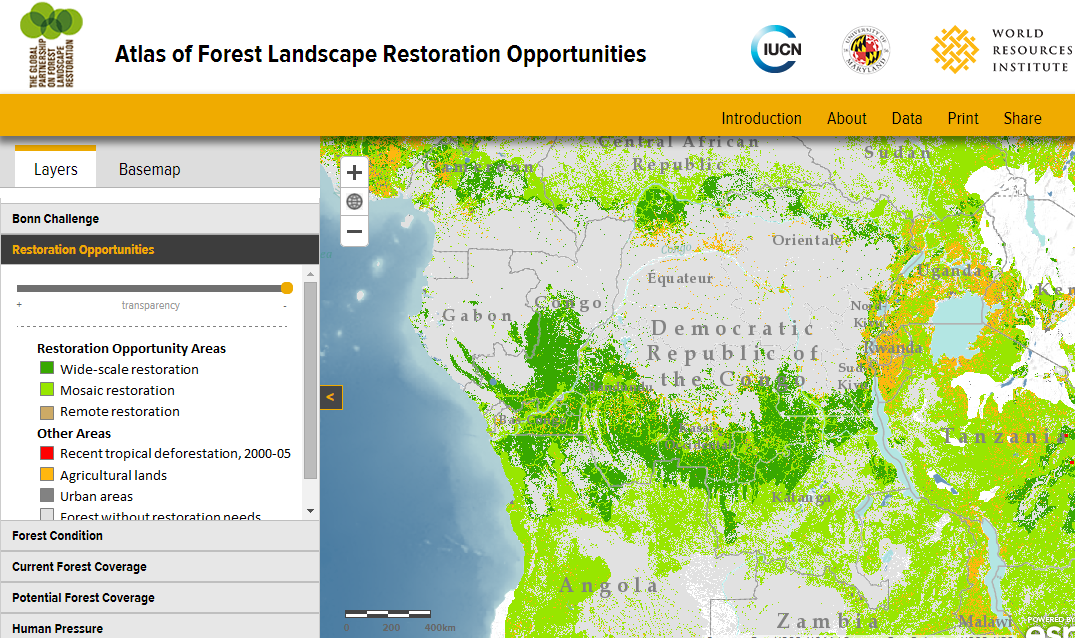 The Democratic Republic of the Congo (DRC) holds the most rainforest in Africa and the second-most rainforest of any country in the world, behind only Brazil. Now the country is pledging to restore 8 million hectares of lands degraded by activities such as 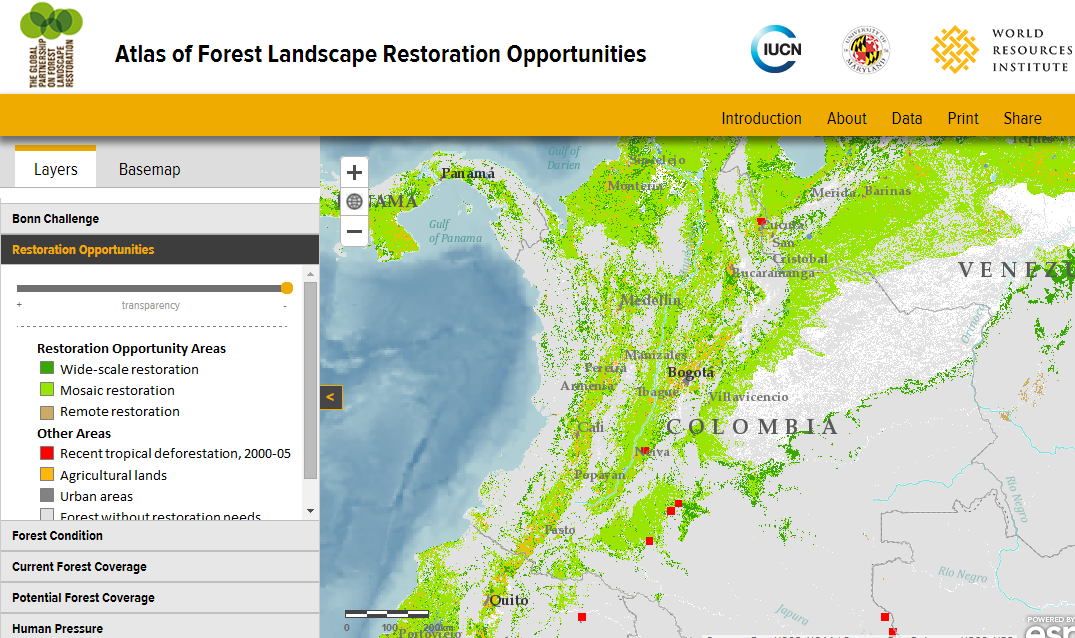 The landscape of Colombia is quite diverse, with ecosystems ranging from dense tropical rainforests to dry forests and shrub lands to open savannahs. Colombia pledged to restore 1 million hectares of these ecosystems, which are increasingly threatened by agricultural expansion, logging, mining, and energy development. Approximately 40 percent of the country is home to the Amazon rainforest – the most biologically rich forest on Earth. Colombia alone supports 10 percent of the world’s plant and animal species. 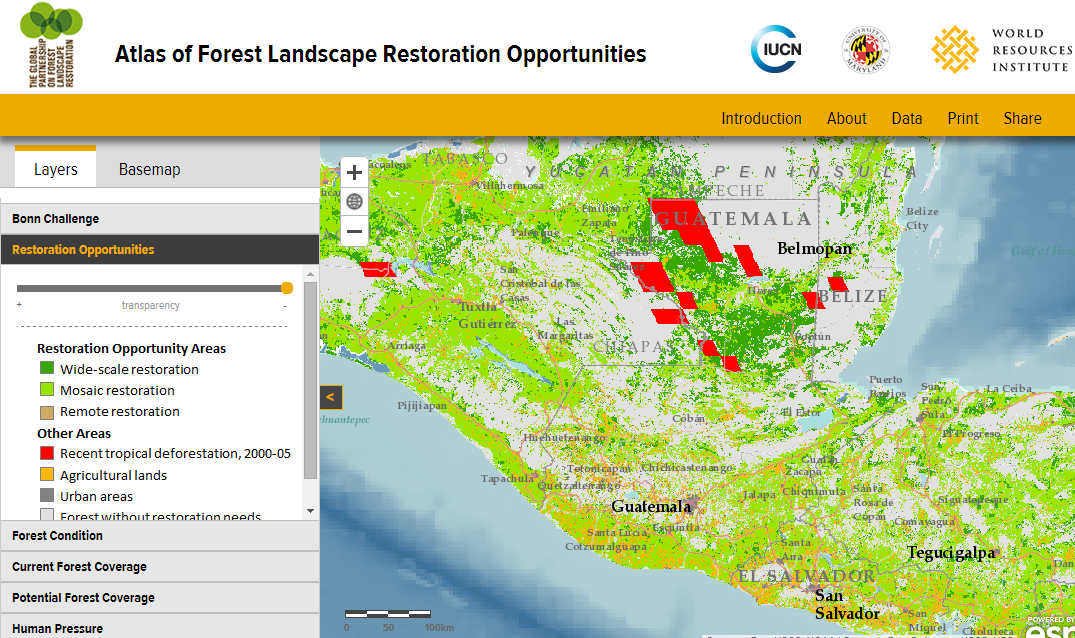 A relatively small country with only 10.7 million hectares of land, Guatemala boasts one of the more extensive forest systems in Central America. Nearly a third of the land is covered by forests, supporting rural livelihoods and rich biodiversity. With an estimated annual deforestation rate of 80,000 hectares – or 2 percent per year – the country’s forests are at risk. To address this, Guatemala has pledged to restore 1.2 million hectares of land degraded or deforested by agricultural expansion and timber harvesting. A restoration approach that embraces a mosaic of trees and agriculture can help to alleviate these pressures.

Two things are particularly encouraging about these pledges and domestic commitments. First and foremost, these national restoration targets and programs represent national will to restore degraded landscapes. They were made to satisfy national interests and goals, but the fact that they contribute to reaching the global target is a welcome extra benefit.

Second, they are likely to inspire other countries to restore. Each new commitment to restoration helps build a global movement to return the world’s 2 billion hectares of degraded land back to productivity, while simultaneously avoiding new deforestation.

The world has been inspired to act at the UN Climate Summit. Now, it’s time to turn these commitments into real change on the ground.

Bonn Challenge On Track to Meet Land Restoration Goal by 2020