This is the second installment of WRI’s blog series, New Perspectives on Restoration. The series aims to share WRI’s views on restoration, dispel myths, and explore restoration opportunities throughout the world.

The world has lost almost half of its original forest cover, due largely to booming population growth and agricultural expansion. But even though these forests are gone, there is still a tremendous amount of underutilized and unproductive land that has the potential to provide valuable ecosystem services if trees are returned to the landscape. Clean water, improved soil fertility, and income from forest products are just a few of the services that these lands, once restored, could provide.

So where in the world are the greatest opportunities for restoration? In collaboration with the University of Maryland and IUCN, and as part of the Global Partnership on Forest Landscape Restoration, WRI recently updated its Atlas of Forest Landscape Restoration Opportunities. We found that more than 2 billion hectares of land worldwide have the potential to be restored—and many of them are located in some unexpected places.

What Do We Mean by Restoration?

As we noted in a recent blog post, restoration isn’t just about planting trees—it involves improving the productivity of landscapes that are deforested or degraded. Through a geospatial analysis involving dozens of datasets ranging from population density to land cover to climate, we produced a global map showing where deforested and degraded forest areas have the greatest potential to be restored. The map classifies the type of restoration opportunity using three main categories: 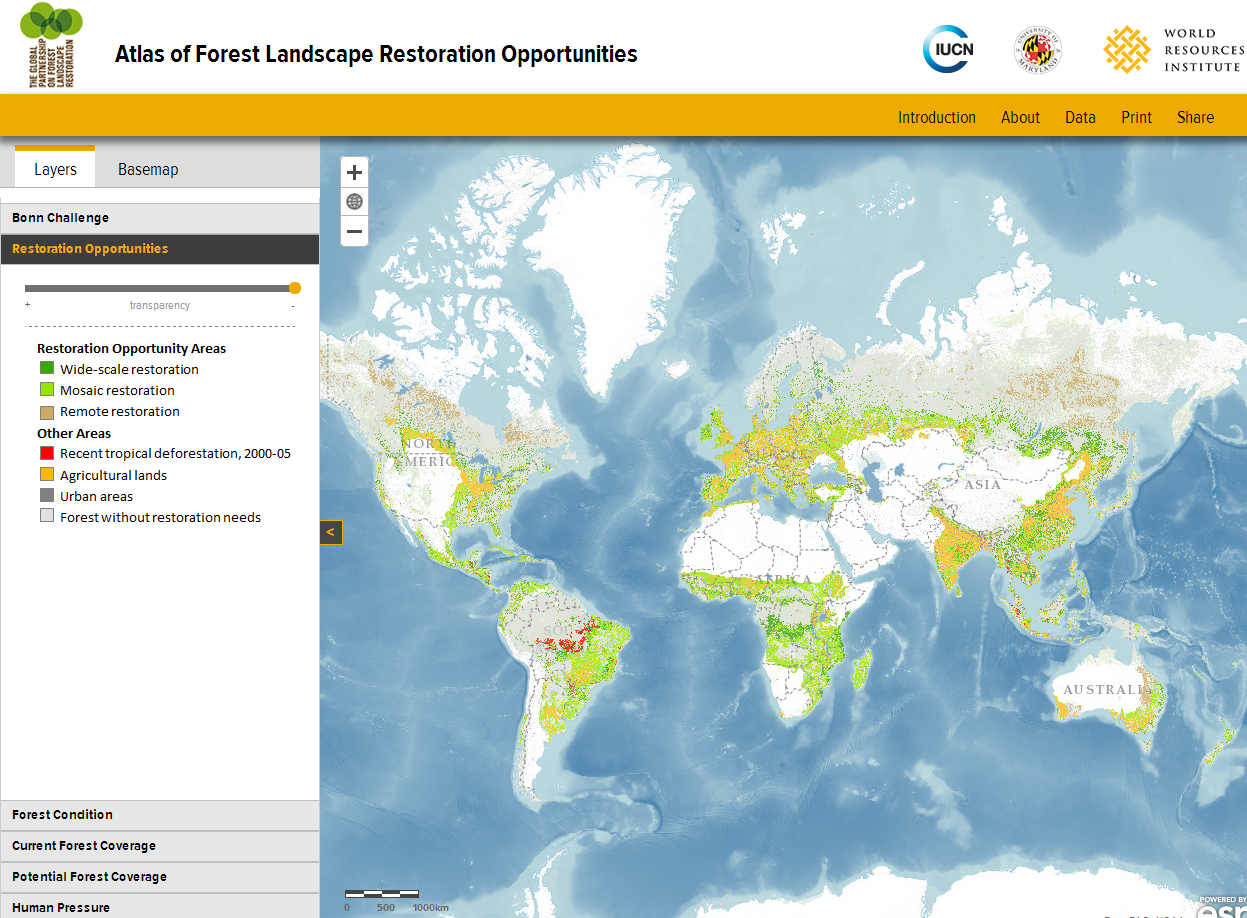 Where Can We Find Restoration Opportunities?

On a continental scale, Africa has the greatest area of opportunity for both wide-scale and mosaic restoration. At more than 720 million hectares, this area is roughly equivalent to the entire opportunity area for North and South America combined.

But there are also several unexpected countries that offer significant restoration opportunities. These places are surprising because we don’t think of them as being forested in the traditional sense—their forests having long been cleared for other land uses–but their potential for restoration is great: 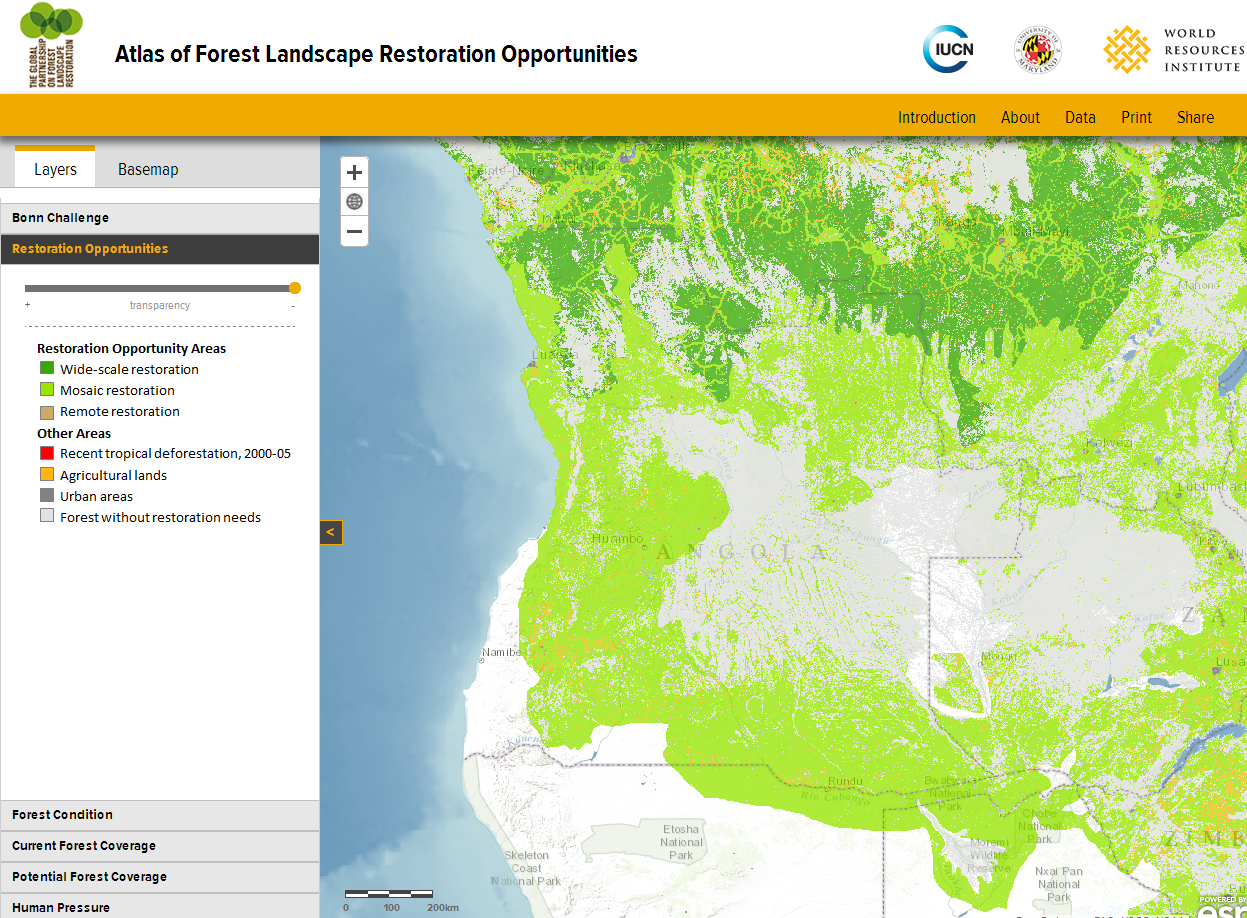 At 57 million hectares, Angola ranks fifth in the world for greatest opportunity area for mosaic restoration. Angola’s rich agricultural potential, such as traditionally fertile soils and a favorable climate, make the country highly suitable for agroforestry (i.e., integrating trees with agricultural lands to stabilize and enrich soils). Brazil, Russia, the United States, and China round out the top five greatest opportunity areas for mosaic restoration. 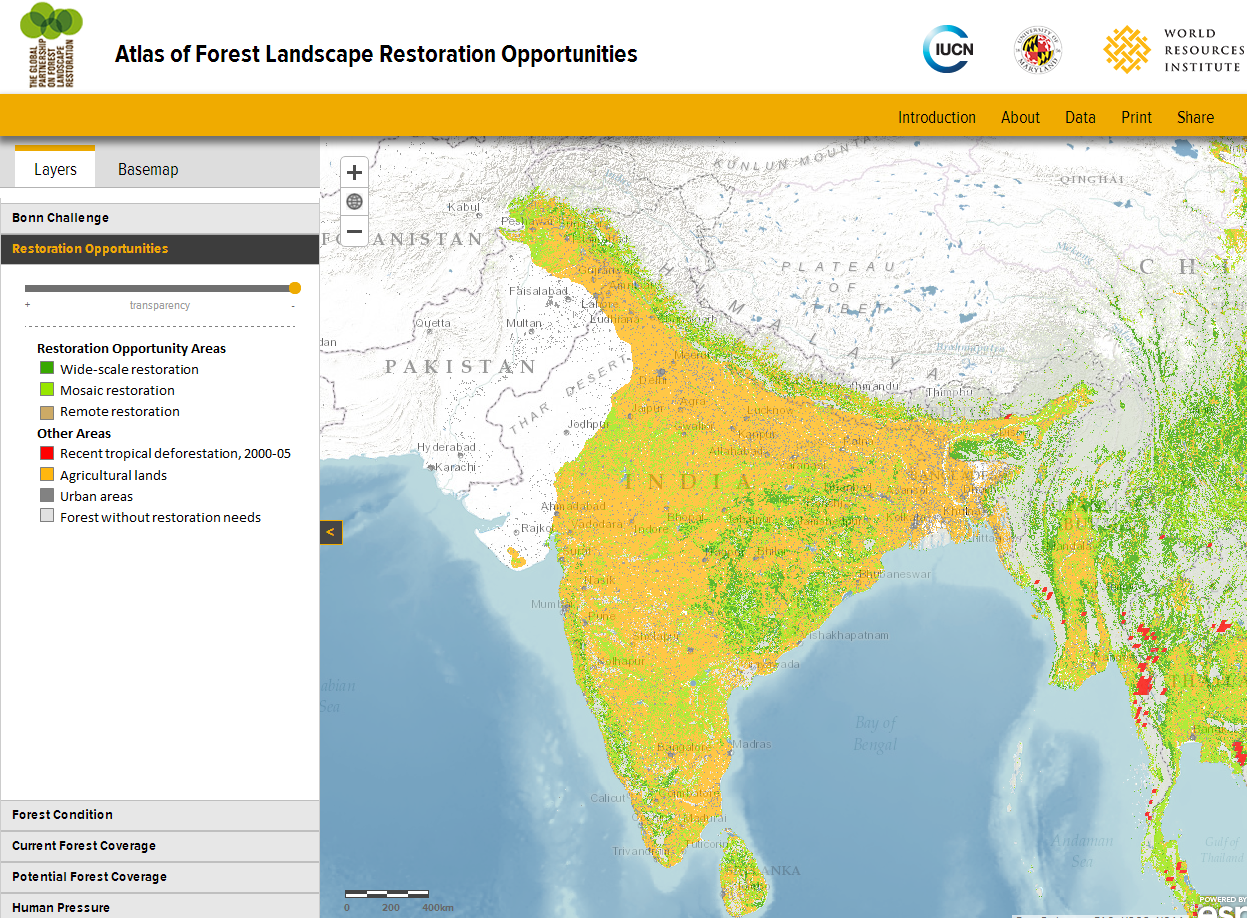 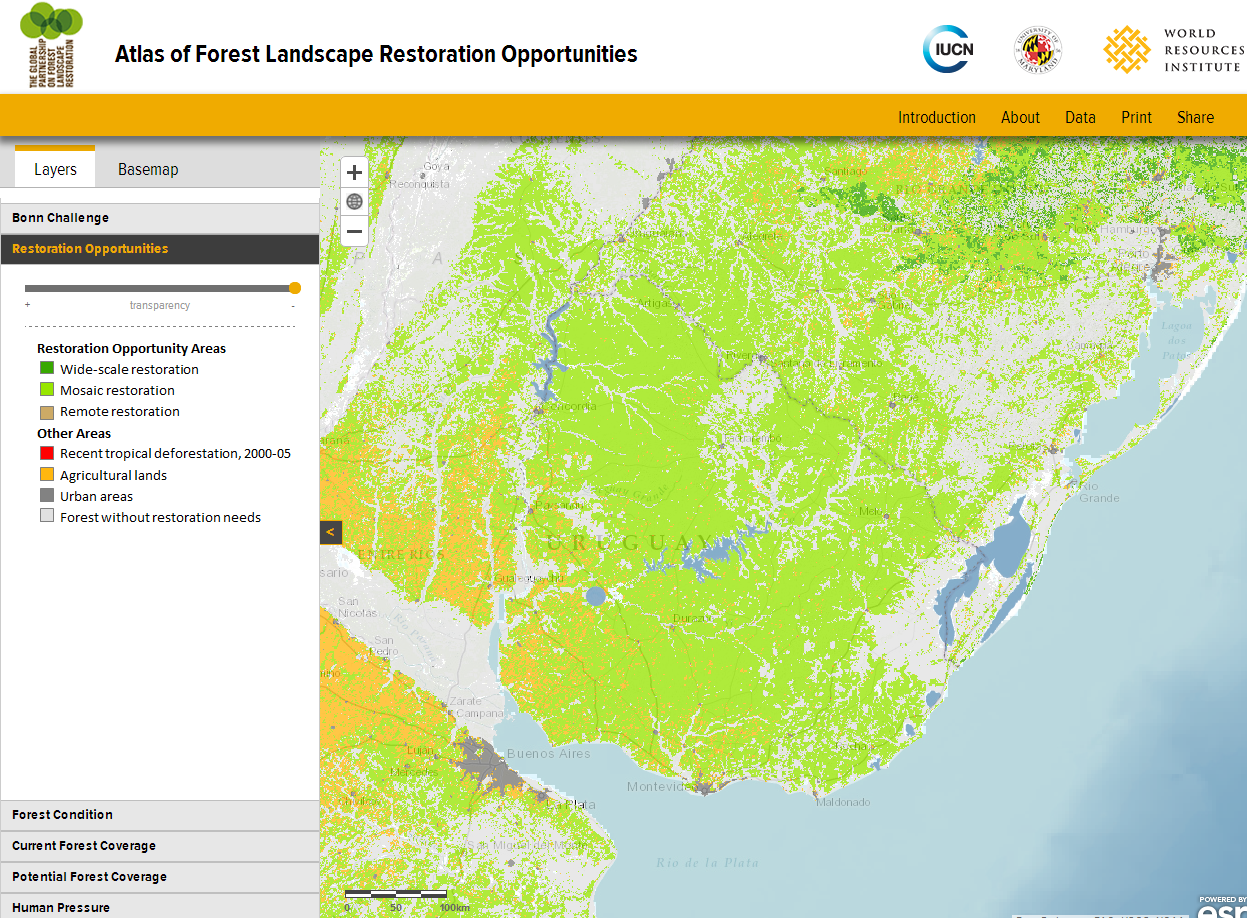 About 72 percent of Uruguay’s total land area is classified as opportunity area for mosaic restoration, which is the highest proportion of any country in the world. Much of rural Uruguay is dedicated to ranching and pastoral agriculture, such as raising cattle and sheep. Integrating trees into these landscapes would benefit livestock by providing natural areas of shelter from the sun and wind, as well as enriching soils to improve the quality and diversity of vegetation for grazing.

4) Democratic Republic of the Congo (DRC) 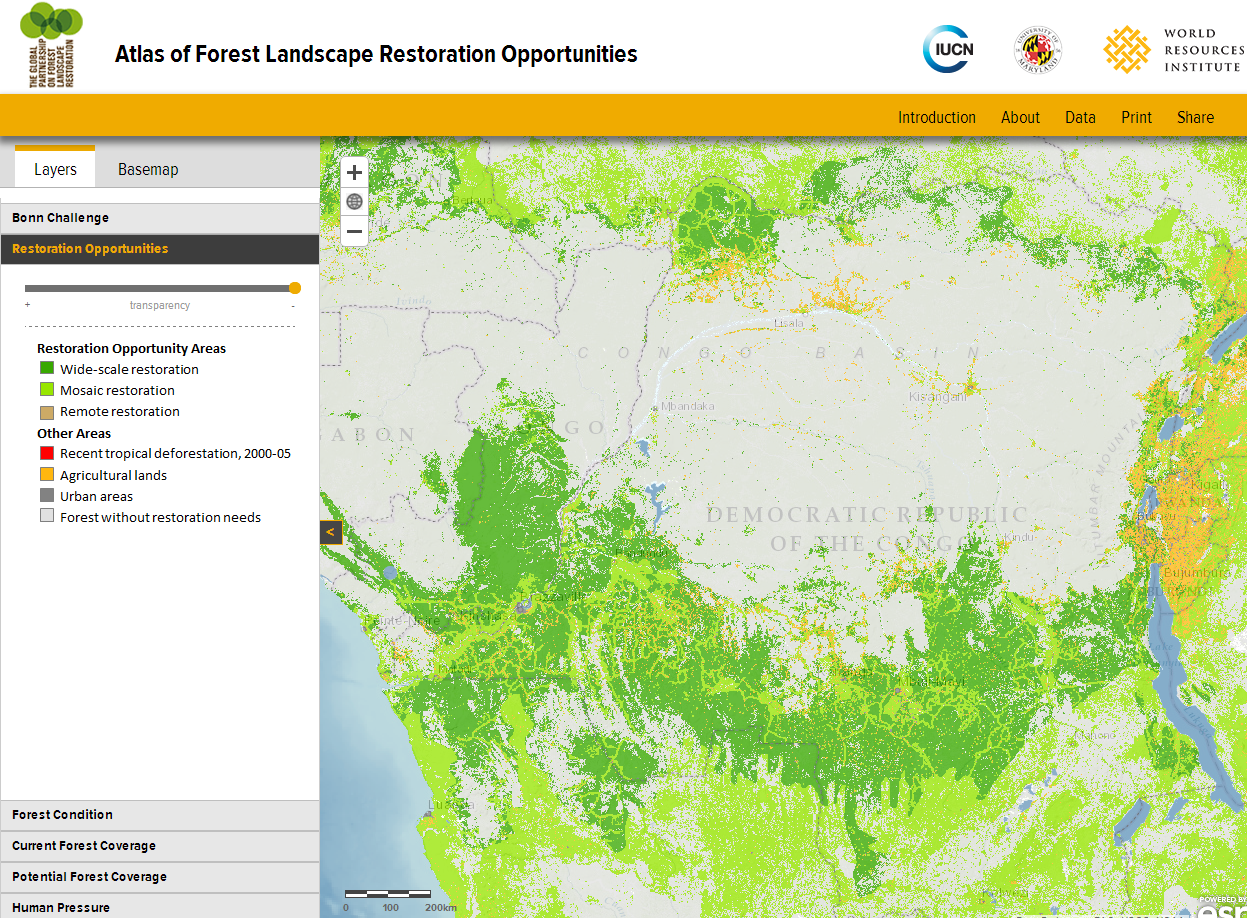 About 40 percent of the wide-scale restoration opportunity for the entire continent of Africa is in the DRC. It hosts especially dense, rich tropical rainforest, which has high potential for carbon storage and biodiversity. The relatively low population density in the central portion of the country makes this area viable for wide-scale restoration to expand the area of dense tropical forest that exists to the north. 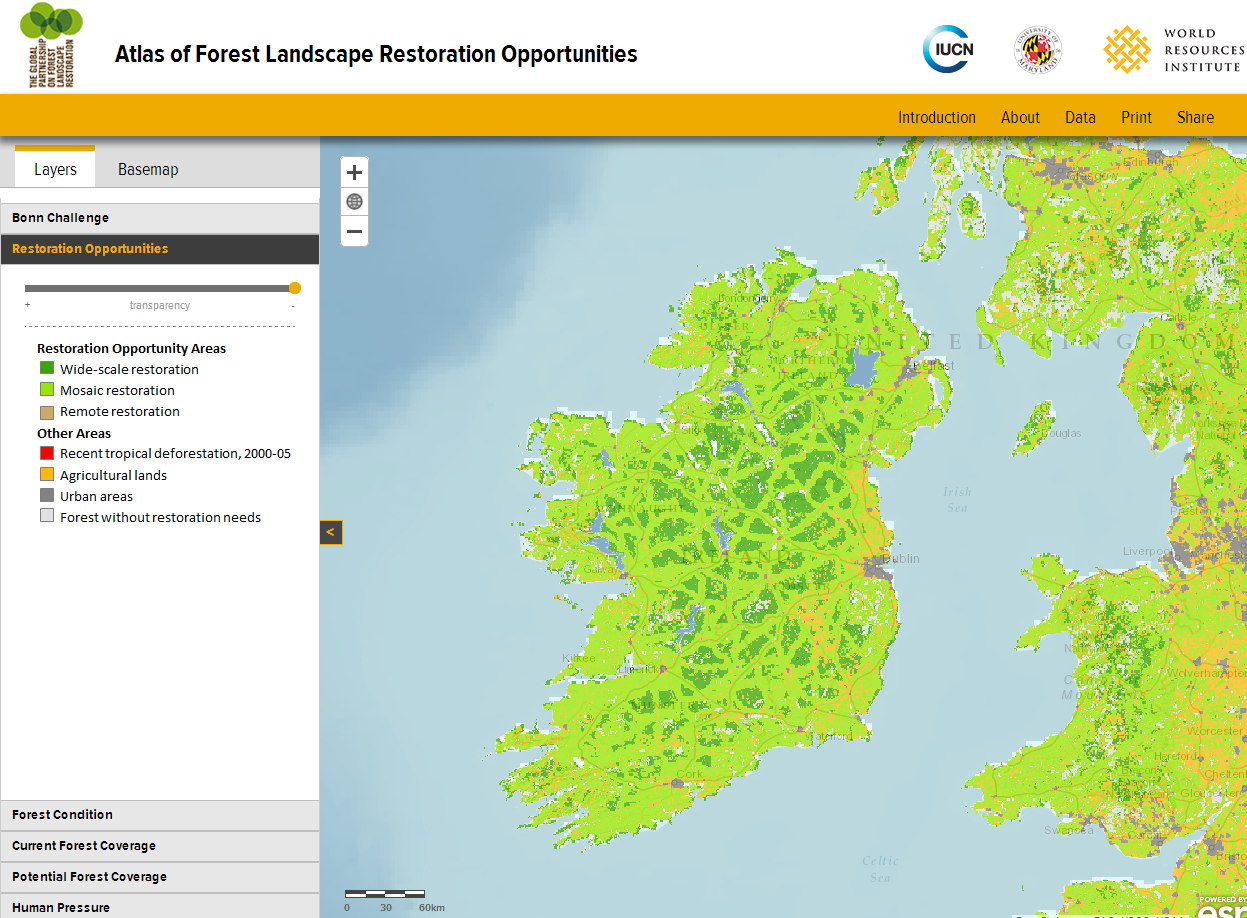 Proportional to its size, Ireland has the greatest opportunity area for both wide-scale and mosaic restoration, with 84 percent of the country classified as opportunity area. The “Emerald Isle” used to be almost entirely forested, but the vast majority of trees had been removed by the 18th century, when pastureland became the dominant landscape. Opportunities for wide-scale restoration are more abundant in the relatively less populated central interior, while opportunities for mosaic restoration—integrating trees into pastoral landscapes and residential areas—are abundant throughout. 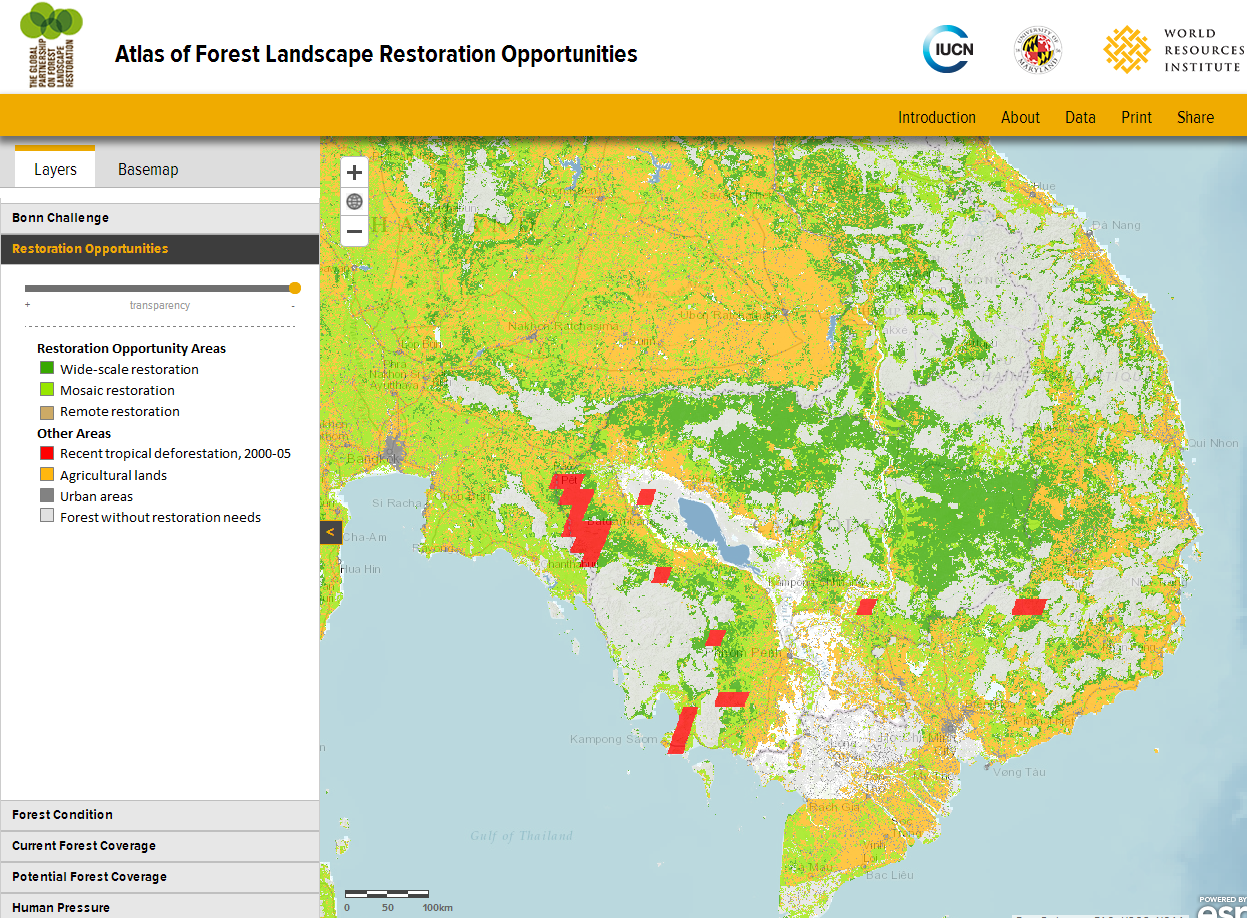 About 30 percent of Cambodia is suitable for wide-scale restoration, which is the highest national proportion in the world for this type of restoration. Cambodia is known for its rich tropical forests, though they are particularly threatened by illegal logging and expansion of industrial plantations growing rubber, sugar cane, and other commodities. The largest expanses of wide-scale restoration opportunity are concentrated in the more sparsely populated northeastern portion of the country. 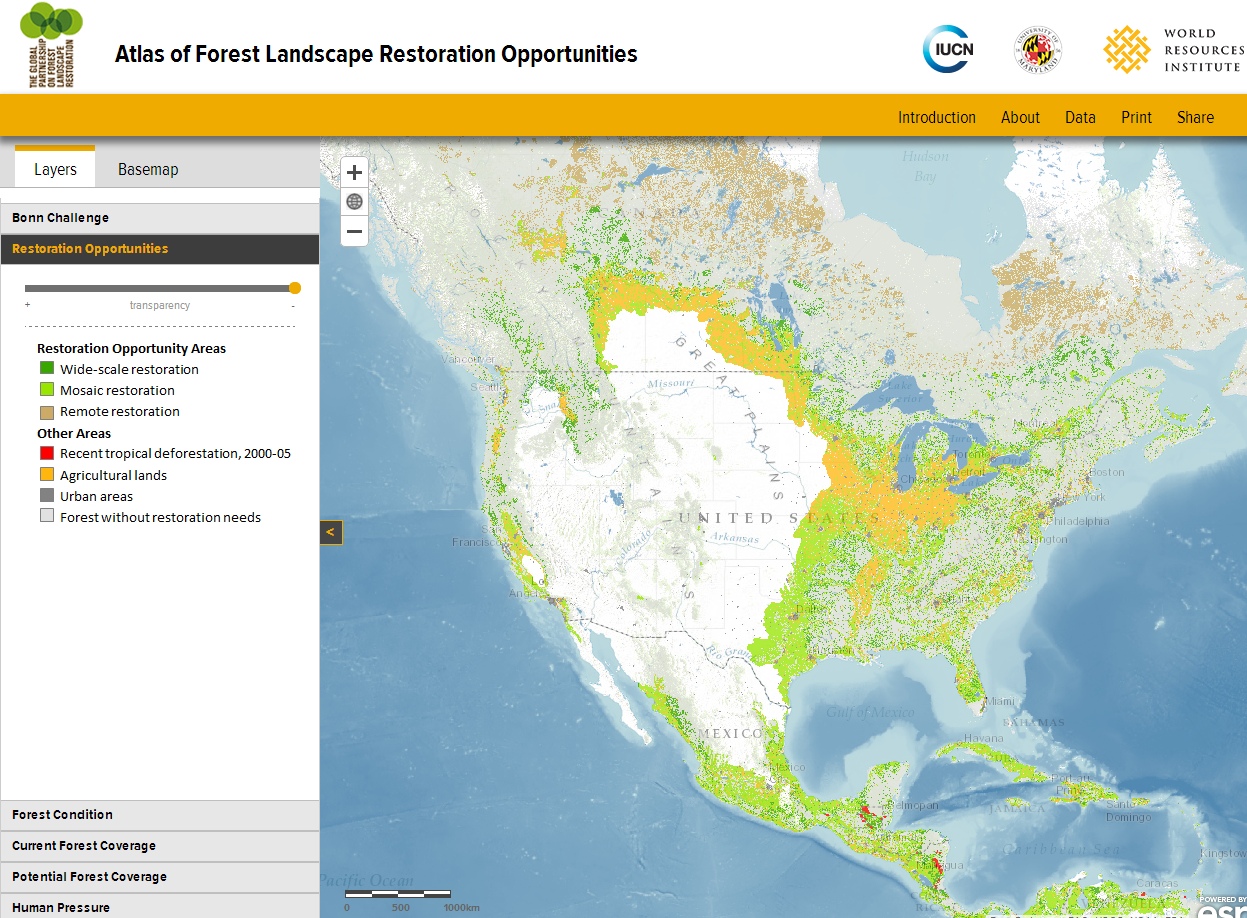 The United States ranks third in the world for greatest mosaic restoration opportunity and fifth in the world for greatest wide-scale restoration opportunity. Opportunities for mosaic restoration are concentrated in the productive agricultural regions of the country, such as the Mississippi River Basin and central valley of California, as well as in residential areas along the east coast where there is great potential for integrating trees into suburban landscapes and other moderately populated areas. Opportunities for wide-scale restoration are quite scattered throughout the country, with larger expanses located in the west along the Sierra Nevada and Rocky Mountain ranges.

A global map that highlights potential opportunities is just the starting point, however. National and sub-national analyses are needed to identify more precisely where restoration can take place and how it can be done. WRI, in partnership with IUCN, is already working on these detailed analyses. The newly-released Restoration Opportunity Assessment Methodology Handbook provides an overview of how we are approaching these assessments and helping to create a roadmap toward large-scale restoration throughout the world.

By capitalizing on the world’s bounty of restoration opportunities, we can ensure that forest landscapes realize their full potential for productivity and biodiversity.