Between 2005 and 2017, 41 U.S. states and the District of Columbia reduced their energy-related carbon dioxide emissions while increasing real gross domestic product, debunking the myth that economic growth can only occur by compromising the health of the planet.

In a new report, America's New Climate Economy, we assess the progress the United States has made toward a low-carbon economy.

Decoupling — which occurs when a jurisdiction increases its GDP while decreasing emissions — is one useful metric. The United States as a whole, along with dozens of other countries, has decoupled GDP growth and CO2 emissions to some extent.

It is also important to evaluate individual U.S. states and the factors contributing to their success. This is especially true when the federal government is systematically dismantling climate policies and regulations. The most successful states can serve as examples for others to follow.

Which States Have Decoupled Economic Growth from Emissions Growth?

Over four-fifths of U.S. states have decoupled their emissions from economic growth. These states are both large and small, and located in every part of the country — including Maine and New York in the Northeast, Alabama and Georgia in the South, Indiana and Ohio in the Midwest, and Alaska and Nevada in the West.

Of these 41 states, Maryland reduced its emissions the most (38%), followed by New Hampshire (37%), the District of Columbia (33%), Maine (33%), Alaska (29%) and Georgia (28%). Given reversals of various climate policies at the federal level, this finding offers hope that the United States can make significant progress toward tackling climate change at the state level regardless of federal policy.

A combination of technological, market and policy factors have allowed states to reduce their CO2 emissions. This includes a major shift from coal to natural gas in the power sector; the rapid deployment of wind and solar power in recent years; more stringent efficiency standards for vehicles, lighting and appliances; and the shift to a more service-based economy.

In most states that reduced their emissions, the dominant reason was a decrease in the carbon intensity of the energy sources they used to generate electricity — with substitution of gas for coal playing a major role. For a few states such as Alaska, Massachusetts and Kentucky, the decline came mostly from improvements in energy intensity, as a result of energy efficiency in buildings and industries, and of states moving away from heavy manufacturing to less carbon-intensive service economies.

Northeastern and Midwestern States Have Decoupled the Most

Swapping out coal for cleaner sources of electricity played the biggest role. Policies like the Regional Greenhouse Gas Initiative (RGGI), a cap-and-trade program for power generators, also probably helped decrease the region's carbon footprint, and studies show the program offered significant economic and health benefits. RGGI revenue was invested in energy efficiency, customer bill assistance and other measures, which contributed to $1.4 billion of net positive economic activity in the nine RGGI states between 2015 and 2017, according to one analysis.

Midwestern states reduced their emissions by 17% and increased their GDP by 11%. Despite historical reliance on fossil fuels and a strong manufacturing base, Kansas, Ohio, Minnesota, Illinois and Michigan have significantly improved the carbon intensity of their power sectors. Iowa and Kansas each generated 37% of their electricity from wind and solar energy. Renewable energy is also picking up steam in Minnesota and Illinois, but the switch from coal to gas has caused the biggest reduction in Midwestern states' emissions from electricity. 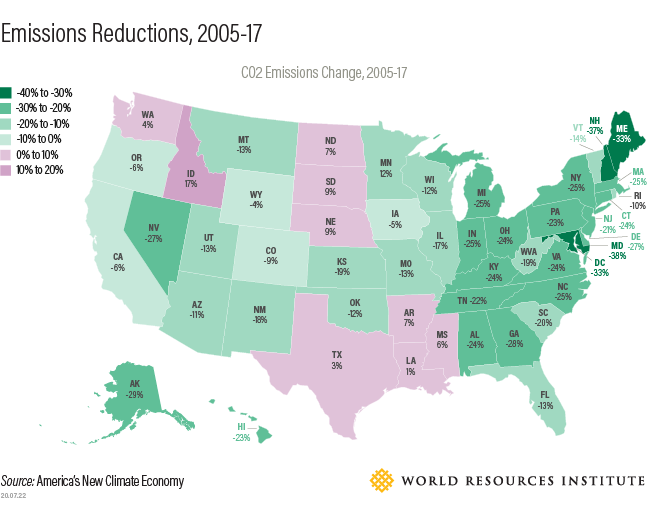 Southern and Western States Are Lagging Behind

Nine states have not decoupled economic growth from emissions, mostly in the South and West. Their emissions grew over the 12 years studied, though in most cases much slower than state GDP.

Louisiana was the only state that went the wrong direction on both GDP and emissions.

Texas grew its economy by 45% while increasing its emissions by 3%. Even though Texas has diversified its economy in the last 30 years, the oil and gas industry is still a major contributor to the economy and employment. Wind energy enabled Texas to cut its electricity sector emissions by 8% between 2005 and 2017, but increases in emissions from the state's industrial and transportation sectors — by 2% and 20% respectively — wiped out those gains.

North Dakota increased its GDP by 75% from 2005 to 2017, but also increased emissions by 7%. Oil and gas production has contributed to the state's growth in both GDP and emissions, as well as population. Development in the oil and gas sector has attracted further investment in other sectors of the state's economy, including transportation, accommodation, food services and real estate.

The boom and bust cycle of extractive industries, however, raises questions about the long-term success of this economic development model. As a result of the 2014-2016 oil bust, North Dakota's GDP declined by 10% while overall U.S. GDP grew by 4.6%. Low oil prices due to COVID-19 are already creating a similar downturn in state economies dependent on oil and gas.

Washington State is also not among the states that have decoupled, which may be surprising given how Governor Jay Inslee has made fighting climate change a top priority. On the bright side, Washington's carbon intensity (emissions per dollar of GDP) is the seventh lowest in the country and the state's economy grew by more than 40% between 2005 and 2017 (the third fastest GDP growth).

But Washington's emissions increased by 4% during this period. While emissions from the power sector went down by 27%, the state saw increasing emissions associated with natural gas use in buildings (28%) as well as a slight increase in transportation emissions (9%).

It's important to remember that decoupling measures reflect progress, not absolute performance.

For instance, Alaska and Montana were able to reduce emissions by 29% and 13% respectively, while achieving double-digit economic growth. However, though they made a lot of progress, both states were still among the 10 states with the highest per capita CO2 emissions and the highest carbon intensity in 2017. Industry, including oil and gas, contributes over half of Alaska's emissions, while Montana relies heavily on coal. Both states have low populations and harsh winters, which raises residential energy needs.

In contrast, Rhode Island and California made less progress in reducing their emissions from 2005 to 2017, but they are still among the 10 states with the lowest carbon intensity because they had lower emissions in the first place. Rhode Island uses zero coal, while California ranks first in the nation for solar, geothermal and biomass electricity. 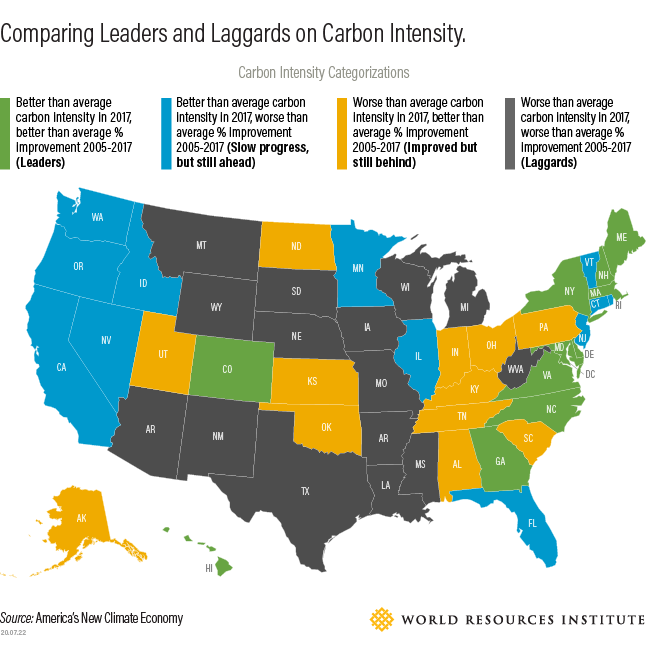 The Challenge Ahead for Reducing US Greenhouse Gas Emissions

It is encouraging that 41 U.S. states and the District of Colombia reduced their energy-related CO2 emissions while increasing real GDP in recent years. The decoupling trend shows that a huge swath of the nation is creeping in the right direction.

This is promising, but clearly there's much more work to do to confront the climate crisis.

For the world to be on a trajectory to limit global warming to 1.5 degrees C (2.7 degrees F), as called for in the Paris Agreement, the United States needs to reduce emissions more than twice as fast in the next decade as it has since 2005. But since 2011, the pace of emissions reduction has slowed down for many states.

Much of the power sector emissions reductions have come from retiring coal in favor of gas. The next challenge is to switch from natural gas to zero-carbon sources of electricity like wind and solar. Fuel efficiency has slowed transportation emissions, but to sufficiently reduce emissions, states need to start replacing internal combustion engine vehicles with electric vehicles and make significant investments in public transportation.

So, how can we get to where we need to be?

The states running behind must start pursuing "low-hanging fruit" options to reduce their CO2 emissions. States that have already decoupled their emissions from GDP must invest in the next generation of solutions. And above all, the federal government must step up with comprehensive climate policy that will help states get the rest of the way.

For more, see our blog on 10 charts that show the economic benefits of climate action, and our report, America's New Climate Economy.