Nationally determined contributions (NDCs) are countries' main vehicle to signal their commitments and plans to meet the Paris climate agreement's mitigation, adaptation and finance goals. Countries' initial NDCs are very diverse, varying in the types of commitments and metrics included, as well as in the sectors and greenhouse gases they cover. Importantly, these initial NDCs also specify a range of time frames: some go up to 2025, others up to 2030, and a few use other time frames, such as including both 2025 and 2030.

At COP24 in Katowice, countries defined a number of common parameters for governments to use in their NDCs. However, the issue of varying time frames remains unresolved. Countries only agreed at COP24 to use common time frames and do so with those NDCs to be implemented beginning in 2031. This left the tricky question of the common time frame's actual duration outstanding. At COP25 in Madrid, negotiators now have an opportunity to resolve this issue.

WRI's new research paper, Setting a Common Time Frame for Nationally Determined Contributions, discusses how the NDC time frame affects other elements of the Paris Agreement and evaluates five different options for specifying the time frame. The paper also considers how countries might align their domestic processes with an international time frame. The paper finally provides suggestions for a potential decision that countries could consider in their negotiations.

A common NDC time frame will ensure countries implement and report on their commitments over the same time period, facilitating better understanding and assessment of global progress. The length of the NDC's time frame matters. Longer time frames may lock in insufficient ambition over extended periods of time while shorter time frames provide signals to mobilize short-term investments (in response to the Paris Agreement's global stocktake, the latest climate science, technological breakthroughs or socioeconomic changes). As we face a climate emergency, the decision on common time frames should also accelerate the pace and scale of action by encouraging countries to take on board the outcome of the global stocktake taking place every five years.

Furthermore, as highlighted below, NDCs interact with a number of other elements of the Paris Agreement. In particular, the length of the NDC time frame has important relationships with the Agreement's enhanced transparency framework, cooperative implementation (market and non-market), and the global stocktake.

The Paris Agreement allows countries to cooperate through market and non-market efforts to achieve their NDCs. This cooperative implementation may involve trading or exchanging emission reduction credits or transferring mitigation outcomes from one country to another. The accounting of these exchanges can be complicated when countries use different NDC targets and time frames. Ongoing negotiations on cooperative efforts frequently refer to "periods for NDC implementation," as well as to crediting and trading periods. A decision on common NDC time frames can define and align the periods currently being discussed for implementation, crediting and trading under Article 6.

Parties to the Paris Agreement assess their collective progress toward the Agreement's long-term goals every five years through a global stocktake. Reports from the enhanced transparency framework are core inputs to the global stocktake on countries' abilities and efforts to achieve their NDCs. A common time frame will facilitate comparability of individual efforts and assessment of collective efforts.

What Options are Countries Currently Discussing?

Negotiators are currently discussing a variety of options, many using either a five-year or 10-year time frame as their basis. WRI's paper focuses on five options for common time frames:

Based upon this assessment, a mandatory five-year time frame with the option for countries to indicate an additional 10-year time frame would be most suitable. A short-term time frame paves the way for more predictable investments, while giving assurance to citizens and the private sector about their country's determination to improve their decision-making processes and policy design. It also aligns with the five-year rhythm of the Paris Agreement (the global stocktake and communication of NDCs both occur on five-year cycles). By also allowing countries to choose whether they wish to indicate a 10-year time frame as well, this option also addresses the need to offer longer-term signals and certainty.

At COP25, countries should have the goal of reaching a decision and finding appropriate language to operationalize whichever option is agreed upon. Adopting a decision at COP25 will allow time for countries to adjust their national processes and align future NDCs with the decision, allow time for countries to share their experiences adapting their national processes, and support other elements of the Paris Agreement like the enhanced transparency framework and the global stocktake. 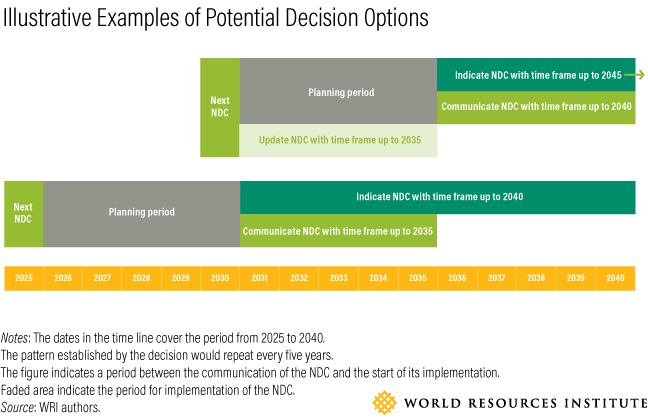 Countries left Katowice with two unresolved issues: the rules for carbon markets under Article 6 and common time frames. Governments should not miss the opportunity in Madrid to demonstrate their resolve to move forward in an effective, coherent and ambitious manner. Making the right decision on common time frames would signal their desire to accelerate the pace of climate action, which is so desperately needed.