How to Make Cities Safer by Design

Traffic crashes claim 1.28 million each year, and will be the world’s fifth-largest cause of death by 2030 unless we improve road safety. The impact of these crashes falls disproportionally on cities in the developing world, with 90 percent of all deaths occurring in low- and middle-income countries. In Sao Paulo, more than 1,300 people die from traffic crashes every year; in Delhi, it’s more than 1,500.

While those who use the roads have historically been seen as responsible for these shocking numbers, the responsibility also can rest with road system designers and urban decision makers. A new WRI report, Cities Safer by Design, shows how basic design principles can save lives on urban streets.

As urban populations grow, with more city dwellers using cars to get around, the risk rises for the most vulnerable on city streets: pedestrians, cyclists and motorcyclists. The United Nation’s Decade of Action on Road Safety initiative has focused attention on the issue.

To effectively reduce the number of traffic crashes, we need to realize that increased urban mobility should not come at the sacrifice of human life and health. The ideal number of lost lives and serious injuries from traffic crashes is zero.

We also must acknowledge human fallibility as road users and human vulnerability to crashes. This fatal combination costs more than a million lives annually and throws millions more into poverty.

One important step to reduce traffic crashes is to change the mindset around them. This is the core idea of Sweden’s Vision Zero, a policy that aimed at reducing serious traffic crashes to zero and is shown to have the greatest results since its beginning in 1997. Its core idea is that while humans might fail, the road system should not. Instead of working to change people’s behavior, Vision Zero aims to address the fundamental design flaws that makes roads unsafe. The country’s most dangerous roads and urban streets were redesigned to reduce vehicle speed and protect pedestrians and cyclists. Today, Stockholm’s traffic death rate is 0.7 per 100,000 people, among the lowest in the world.

The Netherlands has followed a similar course, building national infrastructure to slow vehicles down and protect vulnerable road users. In 1975, its traffic death rate was 20 percent higher than in the United States, but in 2008, it was 60 percent lower. Today, its roads are among the safest on Earth. 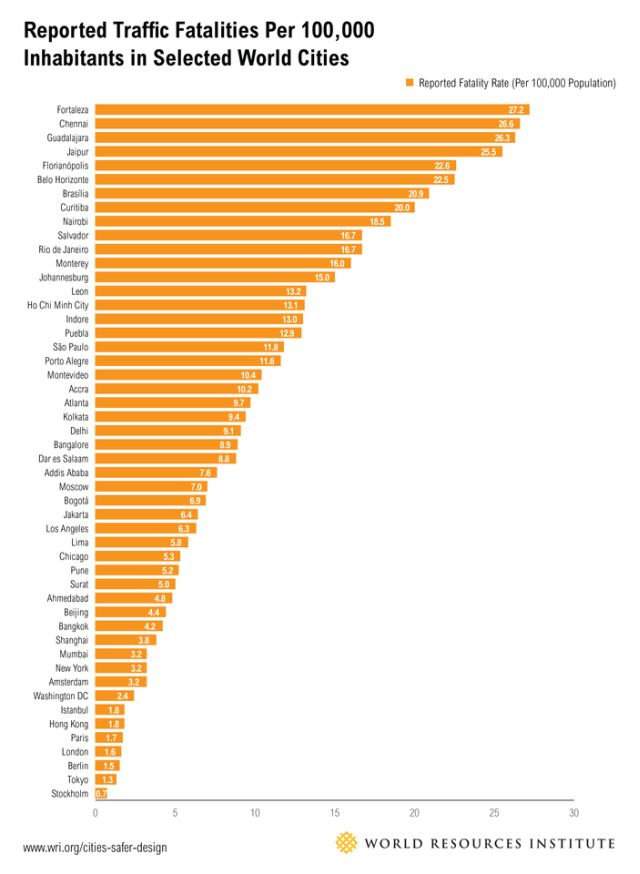 Because human beings are fallible, with inaccurate speed perception and bodies that are extremely vulnerable to crash forces, road users alone cannot bear all the responsibility for traffic crashes. We need knowledgeable decision makers, especially road designers, urban planners and transport engineers who are prepared to design safe environments that reduce risk for city dwellers.

The report covers measures that can reduce vehicle speed and traffic conflict, making walking, cycling and access to transit and public spaces safer. It introduces design principles, safety benefits, application suggestions and evidence for each measure. It also uses drawings and real-life case pictures to illustrate each design element and its application in context.

Evidence suggests that these measures have the potential to improve road safety. For example, speed humps, an easy-to-install traffic calming device, can slow down vehicles passing through, therefore lowering the number of crash injuries by about 50 percent and reducing traffic by about 25 percent. Shortening crosswalk distances, either by narrowing streets or adding medians or refuge islands, can cut pedestrian exposure to car traffic. Each meter or yard shortened can reduce pedestrian crashes by 6 percent. Well-designed bike lanes should have physical separation that protects cyclists from car traffic, while the lane width should allow comfortable cycling. The creation of protected on-street bike path in New York City showed resulted in a 63 percent drop in crashes and injuries of all kinds.

A city safer by design not only saves lives, it can boost the quality of lives, demonstrating a close connection between safety and prosperity. An environment that is friendly to walking, biking and public transport will improve air quality, and encourage physical activity and economic development by encouraging more street-level commercial activities. Better design can create safer, healthier, more vibrant cities.

Today, many cities in the developing world face a stark choice between a car-filled, polluted and dangerous future and an active, healthy and safe one. Cities Safer by Design offers a guide to help make choices to benefit city dwellers around the globe.