How to Build a Circular Economy

We have a waste problem.

The world threw away around 300 million tons of plastic in 2019, nearly equivalent to the weight of the human population. Scientists expect there could be more plastic than fish in the ocean by 2050. One year's electronic waste weighs in at more than 50 million tons. And while far too many people still go hungry, we waste a third of all the food produced.

Altogether, more than 100 billion tons of resources flow into the economy every year, and more than 60% ends up as waste or greenhouse gas emissions.

While COVID-19 made a significant dent in global consumption, it's not a clear-cut picture. Clothing sales plummeted, but home office and exercise equipment purchases went up; spending in the hospitality industry went down, but groceries increased. The use of single-use plastics increased significantly, while plummeting oil prices reduced the economic incentive for plastic recycling.

The 2008 recession showed us that any fall in consumption is likely to be temporary without a concerted effort to make longer-term changes.

This isn't only about consumers buying too much and recycling too little. Our global economy is built on a "take-make-waste" model where natural resources are extracted, used, and then end up as waste. This inefficient model is pushing our planet to the brink, driving the climate crisis, and depleting the resources we need to support more equitable and thriving communities in the future. 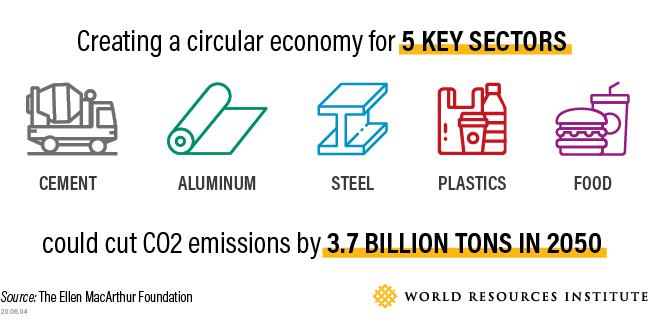 Benefits of Building a Circular Economy

We need to shift our way of thinking and build a circular economy — where waste and pollution are designed out in the first place; products and materials stay in use for much longer; and natural systems can regenerate.

Moving toward a circular economy would make a crucial contribution toward preserving the environment and mitigating the climate crisis. Creating a circular economy for five key sectors — cement, aluminum, steel, plastics and food — could cut CO2 emissions by 3.7 billion tons in 2050, equivalent to eliminating current emissions from all forms of transport.

This is not just an environmental issue. It simply makes social and economic sense to make better use of scarce resources by designing a system to avoid waste and keep materials in use for longer. Consider the fact that there is 100 times more gold in a ton of discarded mobile phones than there is in a ton of gold ore. If we reduce food loss and waste by just a quarter, we could feed 870 million hungry people.

Research shows that creating a circular economy offers a $4.5 trillion economic opportunity by avoiding waste, while also creating business growth and employment opportunities. The goal is to break the link between economic growth and the use of natural resources so that our global economic wellbeing is not tied to environmental destruction. 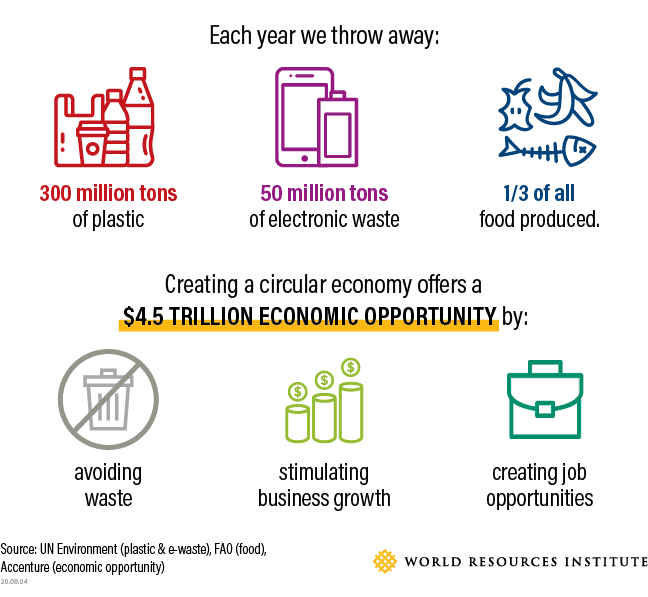 3 Ways to Transition Toward a Circular Economy

There are three ways to address our rate of consumption:

The circular economy focuses on better use of natural resources, and the simple fact is that many of us consume far too much. During the 20th century, the world's use of raw materials grew at twice the rate of population growth. In a world where people in the richest countries consume 10 times as much as the poorest, there is a need for many of us to consume less and many others to consume more.

For companies, consumption issue is often the "elephant in the boardroom," as the fundamental principle of most business models is selling more products to more people. Disrupting that mentality will require business innovation, policy support and consumer demand.

In wealthy countries as well as in the growing global middle class, there is a very important role for behavior change campaigns and policy incentives to nudge behavior in the right direction, for instance around fast fashion, plastics and food waste.

A circular economy is not only about consuming less; it's also about consuming better. For consumers, this can mean choosing versions of products that have been produced in more sustainable ways or that can be recycled. It can also mean changing what we consume — for example by shifting to a plant-based diet, which offers emissions and other natural resource benefits over meat-heavy meals.

Consumer awareness of sustainability is on the rise globally, with the majority of consumers saying they expect brands to do what is right. Consumer pressure is a crucial part of the picture in encouraging businesses to change their practices and governments to introduce favorable policies.

Streaming services are another example of consuming better without necessarily making sacrifices. The last decade has seen a welcome decrease in the production and consumption of physical CDs and DVDs. This behavioral shift hasn't even made a dent on our way of life — we simply consume our entertainment in a better, more sustainable way.

Consumers can only do so much when the entire economy is built on the take-make-waste model. What we need is systemic change, so that sustainability doesn't only depend on consumer choices.

The core principle of a circular economy is that products should be designed to last, with component parts or materials that can be used again.

There is a clear economic case for this model for large machines such as photocopiers, MRI scanners or agricultural equipment. These machines have high upfront costs and are made from very valuable materials, so many companies are successfully using circular models where they take the product back and refurbish it or repurpose the materials. The key will be scaling this model and extending it to a far broader range of consumer-facing products.

There is much to be done on the policy side to incentivize circularity at the systems level. There must be a major shift to incentivize or require the use of secondary or recycled materials, for example by placing taxes on products that use only virgin materials. The UK has taken a step in this direction by introducing a tax on plastic packaging that has less than 30% recycled content.

There must also be a major investment in infrastructure so that recycling can be expanded or even compulsory. One success story comes from the Republic of Korea, where introducing a compulsory food waste recycling program and a ban on food waste in landfills led to an impressive 95% of waste being recycled into compost, animal feed, biogas or solid fuel. The proposed European Green Deal sets out many similar policies, including a Circular Economy Action Plan.

As more and more governments introduce policies that encourage recycling and reuse, and as consumer awareness around sustainability continues to grow, companies that adopt circular business models will find themselves at a clear business advantage.

Circularity Will Mean a Better Economy for All of Us

Making the shift to a circular economy won't be easy. But the reward — a world where people, nature and economies can all thrive — will be worth the effort. We all need to come together — governments, policymakers, civil society and communities — to be better consumers.

Elephant in the Boardroom: Why Unchecked Consumption is Not an Option in Tomorrow’s Markets