How Brazil Can Emerge as a Climate Leader

Brazil, the world’s seventh-biggest greenhouse gas emitter, has the relevant tools and policies it needs to become a leader in the fight to deal with climate change. This opportunity comes at a pivotal time for Brazil: its national climate plan—its Intended Nationally Determined Contribution (INDC)—should be submitted within days as part of global climate negotiations, while a national economic crisis, drought and energy uncertainty inform Brazil’s decisions at home.

A new WRI report, Bridging the Gap Between Energy and Climate Policies in Brazil, finds that Brazil could act to change its energy mix and move toward a lower-carbon economy, but it needs to strengthen existing policies to amplify their impact to join other key climate players including China, the United States and Mexico.

Brazil’s energy sector is now a major source of the country’s emissions and continues to become more carbon intensive as a result of greater reliance on fossil fuels. The country anticipates approximately $500 billion to be invested in energy infrastructure over the next decade—how Brazil chooses to allocate those funds can either lock in carbon-intensive infrastructure or advance Brazil’s position as a leader in the low-carbon economy.

The report recommends that Brazil has the opportunity to speed its transition to renewables, ramp up energy efficiency improvements and leverage “smart” integration of decentralized power into the grid. The analysis recommends that Brazil should invest in modern renewables like wind and solar as a priority, remove harmful incentives for fossil fuels and increase its renewable energy share goal from 20 percent by 2030 to a 30 percent share of wind and solar energy by 2030. 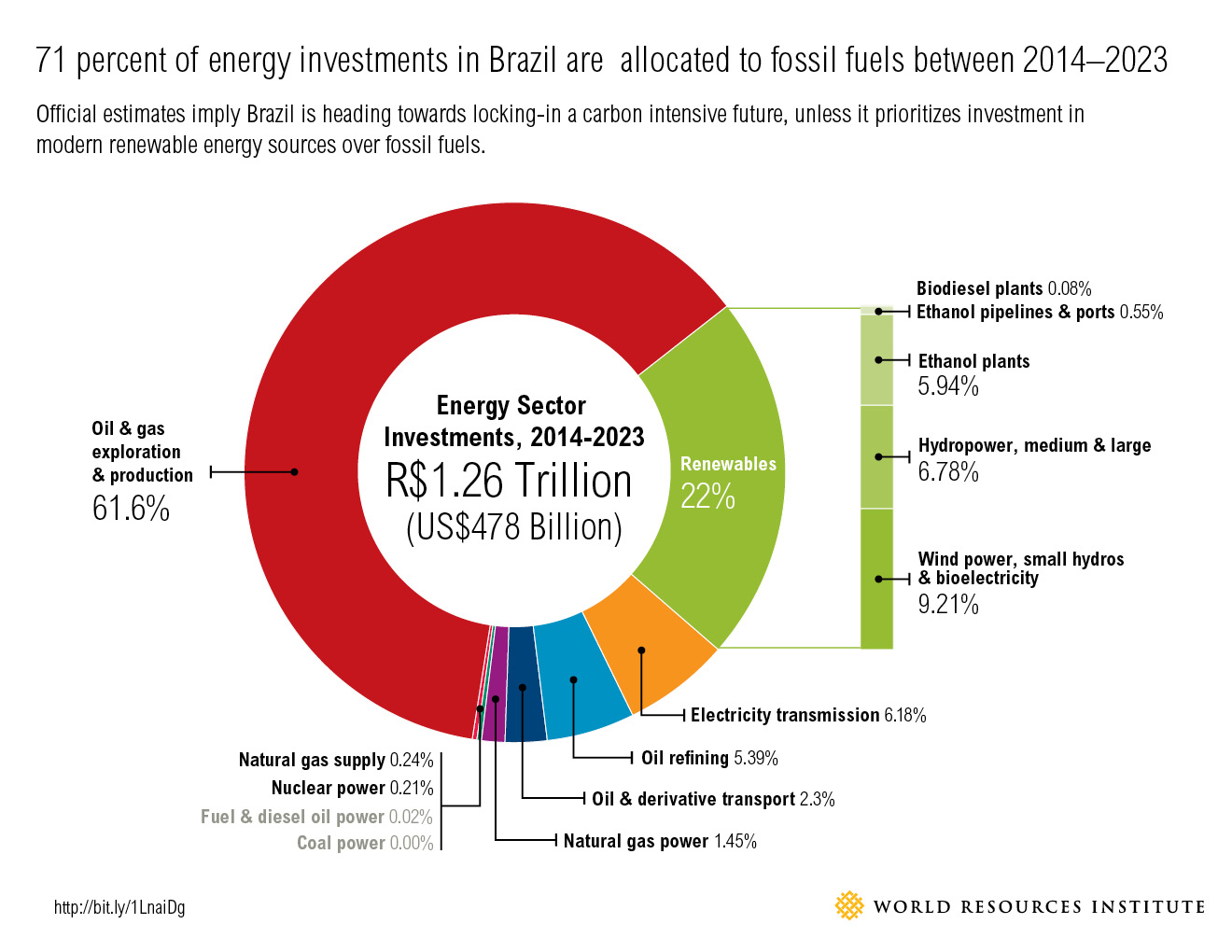 Here are four ways Brazil can curb greenhouse gases, according to the report:

1. Improve fuel economy and invest in shifting to low-carbon modes of transport. Transport is Brazil’s largest contributor to energy-related GHG emissions. The use of biofuels that do not cause negative land-use change, along with mass transportation and non-motorized modes of transport can rapidly curb emissions from this sector. So far, except in a few cities, Brazil has provided only limited incentives to shift towards more efficient transportation modes, including rail and bus rapid transit. Such a shift would bring significant local benefits and improve quality of life.

2. Offer incentives for industrial efficiency, including implementing the planned Brazilian Market for Emission Reductions which would incentivize efficiency by pricing carbon, tying environmental licensing to meeting high standards for energy efficiency, accelerating plans to switch to low-carbon fuels and accelerating implementation of the measurement, reporting and verification (MRV) system for industrial carbon emissions.

3. Give priority to modern renewables, particularly solar and wind power, while addressing the challenges presented by large hydropower projects. Brazil can foster the deployment of solar and wind energy and promote their interconnection with the grid by making a commitment to increase the share of solar and wind in the national energy mix to 30 percent by 2030, as part of its INDC.

4. Reconcile climate and energy policy and planning processes with national- and international-level policies. Climate and energy policy and planning processes need to be more thoroughly integrated. In the energy sector, this implies acknowledging that due to the carbon budget planning processes, such as the National Energy Plan and the Ten-Year Energy Expansion Plan, Brazil cannot continue a focus on fossil fuels. In the context of climate policy, it includes setting ambitious and feasible GHG mitigation goals that consider the full range of cost-effective and beneficial abatement potential in the energy sector.

Brazil has done an exceptional job at curbing illegal deforestation, historically the largest source of its greenhouse gas emissions. But with fossil fuel emissions on the rise, Brazil needs also to prioritize its energy sector to do its part to combat climate change, while continuing to curb land use emissions. Such measures would bring both local and global benefits. This new analysis offers guidance for an integrated approach to more effectively reconcile energy and climate needs. Brazil’s INDC will indicate whether the country is committed to better climate better growth – a pathway to drive economic growth and tackle climate change at the same time.

Bridging the Gap Between Energy and Climate Policies in Brazil