The Clean Power Plan: What’s Water Got To Do With It?

The U.S. Environmental Protection Agency’s new Clean Power Plan has been heralded as a major step toward a low-carbon economy in the United States. By reducing carbon dioxide emissions from power plants by 32 percent from 2005 levels by 2030, the new policy is designed to promote the development of renewable energy sources nationwide.

However, the plan’s impact on water resources has been largely overlooked, even though power plants are significant water users across the U.S., accounting for 45 percent of total water withdrawals. The Union of Concerned Scientists reports that, on average, producing the electricity you use in your home results in more freshwater withdrawals than all of your daily water-related tasks, like sprinkling lawns and washing dishes. Where that electricity comes from makes a big difference in how much water is involved, though. Thirsty energy sources like coal can take 20,000 gallons per megawatt hour to 50,000 gallons per megawatt hour, while wind power requires almost no water at all. 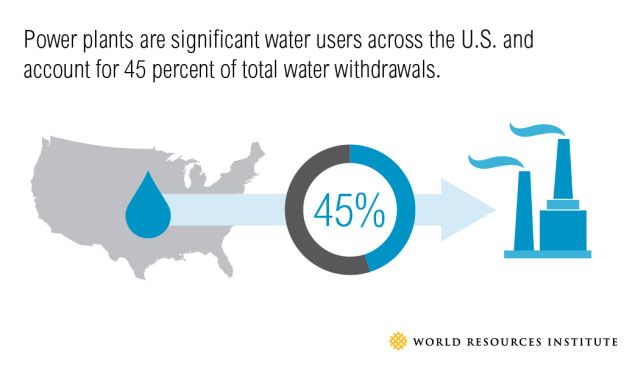 Water stress will likely become a more important factor in future energy decisions. By the time the Clean Power Plan is fully implemented in 2030, over half of the contiguous U.S. is likely to be arid or suffer from high or extremely high water stress. Since companies, farms and homes in these areas will already use most of the available water, there will probably be intense competition for any additional withdrawals. Reports of a megadrought coming to the central and southwestern U.S. highlight that region’s vulnerability to growing water scarcity. 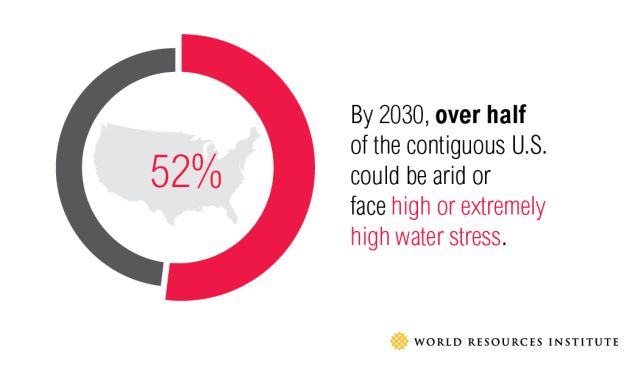 So what impact will the Clean Power Plan have on this water-scarce future? It’s hard to know. How states decide to meet their individual emissions targets will affect the nation’s energy mix. Improved energy efficiency would lead power plants to use less water, while adding carbon capture and sequestration technology to coal plants would make them even thirstier than they are now.

Natural gas will probably hold its place in the future U.S. energy mix as a lower-emissions fossil fuel alternative to coal. The Environmental Protection Agency (EPA) listed the shift of generation from existing coal plants to existing natural gas plants as one compliance option to reduce emissions. The plan itself predicts that natural gas will be the nation’s largest electricity source in 2030.

U.S. natural gas production has risen dramatically over the past decade, largely as a result of hydraulic fracturing, or fracturing. Much of the debate revolves around water issues: fracturing a single well requires between 1.8 million and 6 million gallons of water, while drilling a conventional natural gas well takes only 50,000 to 660,000 gallons. Critics also voice concerns over which contains high quantities of salt, sand and harmful chemicals.

When it comes to water and fracturing, it’s all about location and time. Although fracturing accounts for only one-thousandth of total U.S. water withdrawal, wells are often clustered in a small area. In fact, almost a third of water use in some U.S. counties stems from fracturing. Additionally, wells only require large volumes of water for a few days at the beginning of the fracturing process, so new well development can make a significant impact on water availability in an area. Aqueduct’s water stress projections can lend additional insight into the issue: by 2030, nearly 63 percent of areas in the U.S. where natural gas could be fracked will be arid or suffer from high or extremely high water stress. 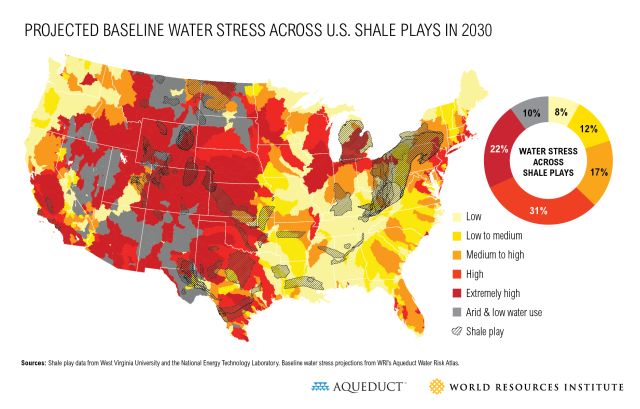 These high water stress levels mean that U.S. states need to be careful about where they develop natural gas resources. Fracturing in a water-stressed area will only add to existing competition for water by domestic, industrial and agricultural users. Still, there are ways to lessen the stress. Operators can use non-freshwater sources or recycle wastewater to decrease freshwater use. Alternatively, states can invest in renewable energy like wind and solar photovoltaic power, which require almost no water at all.

The Clean Power Plan is a major step to bring the U.S. closer to a future powered completely by low-emissions energy sources. But as states begin to plan how to meet the new emissions targets, they should keep water in mind. Aqueduct’s water stress projections allow state policymakers to consider current and future water issues before deciding how to reach their emissions goals. With proper implementation, the Clean Power Plan can protect our water as well as our climate for decades to come.

A Tale of 3 Countries: Water Risks to Global Shale Development