China’s Water Stress Is on the Rise

Water stress levels in many parts of China are very high, due to low levels of water supply and very high levels of demand. And new research shows the situation is worsening.

Using the baseline water stress metric developed for WRI’s Aqueduct Water Risk Atlas, we compared water stress in China between 2001 and 2010, the latest year for which catchment data are available. This analysis paints a much more accurate picture than previous analyses, using detailed freshwater withdrawal data from more than 300 prefectures and high spatial resolution grid data. We found that the percentage of land area in China facing high and extremely high water stress increased from 28 to 30 percent, meaning 678 million people now live in highly water-stressed areas. 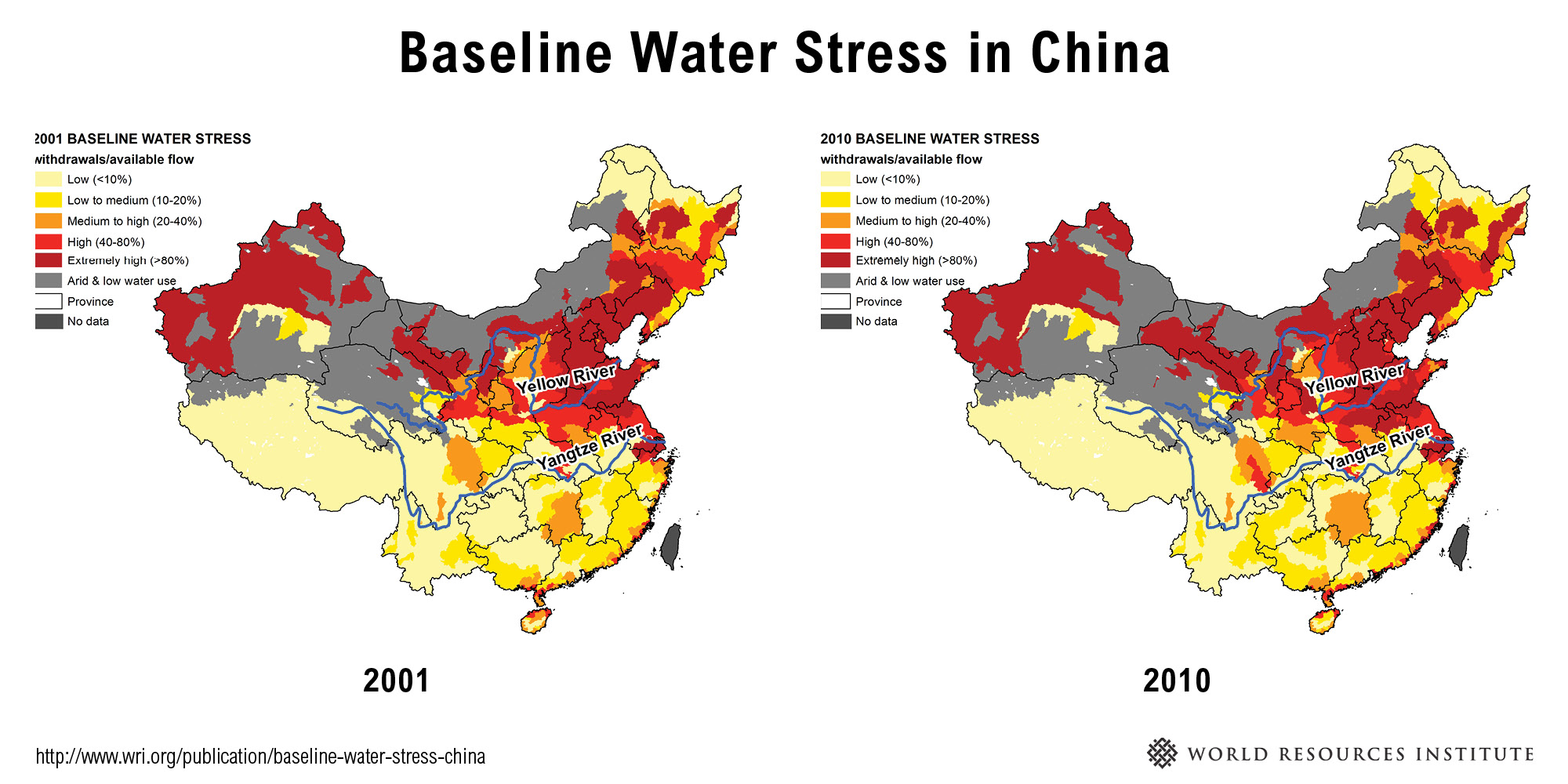 Water stress is defined as the total annual water withdrawals (municipal, industrial and agricultural) as a percent of the total annual available surface water. High values indicate more competition among users—a value above 40 percent is considered as “high water stress,” and above 80 percent as “extremely high.” Overall, water stress across 54 percent of China’s total land area worsened from 2001 to 2010, while 8 percent of the country’s total land area, an area slightly larger than the U.S. state of Texas, moved into a higher category of water stress. 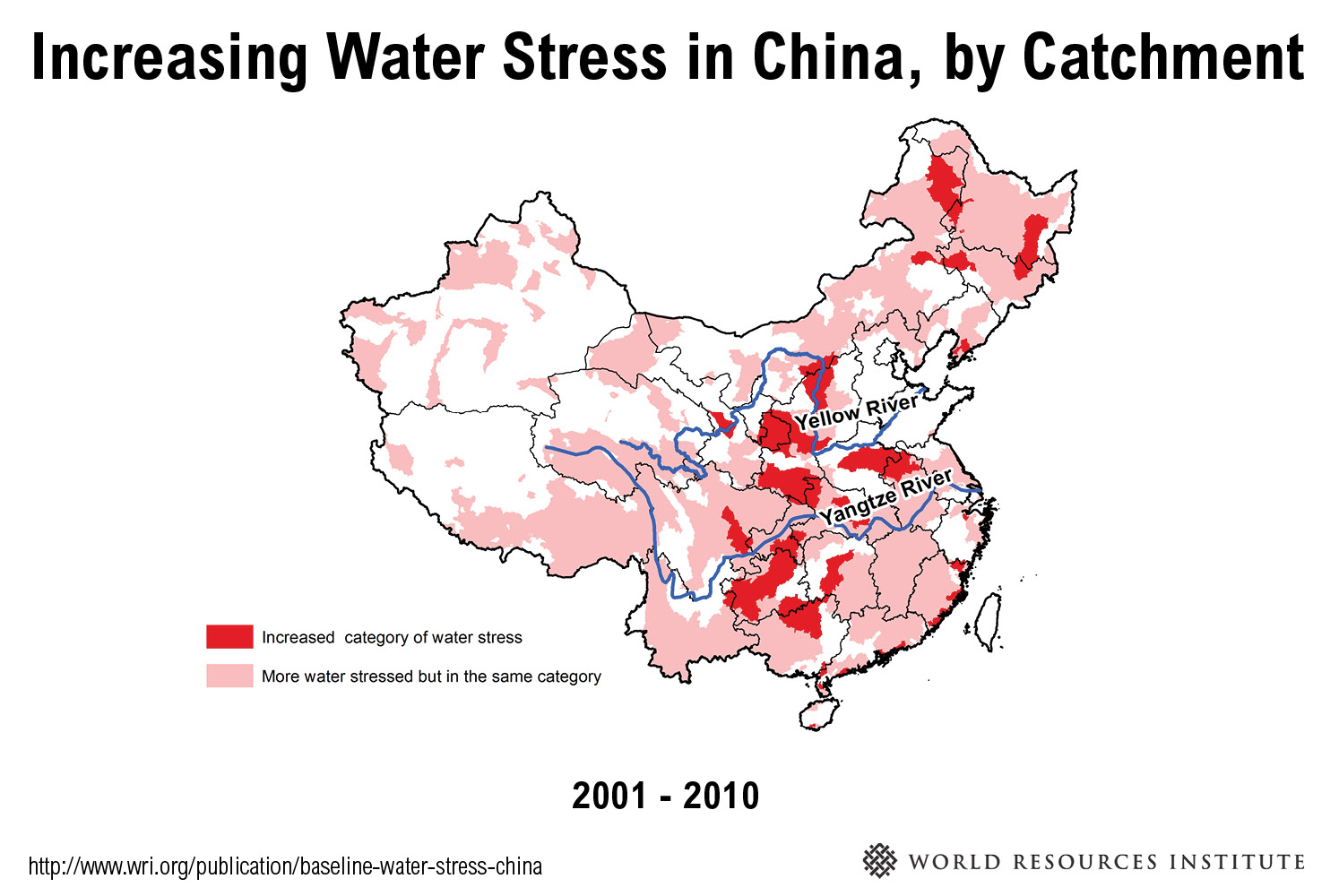 There are several reasons behind the worsened water stress situation for these catchments, but industrialization and urbanization are two of the biggest. Industrial water withdrawals increased in all provincial divisions except Beijing. For example, one catchment in the Yellow River Basin—where water stress increased by 55 percent—is near one of the country’s national coal bases. Extraction and refining of coal is a very water-intensive process. In the Pearl River Delta, one of the major economic zones in China on the southeastern coast, industrial GDP increased 4.8 times, while urban population grew by 56 percent from 2000 to 2010. In Guizhou Province in the southwest, industry grew significantly while the urban population increased by 22 percent from 2001 to 2010.

Some local governments have taken action to promote more water-efficient industrial practices. For example, since 2006, Shandong province has shut down inefficient paper-making and steel factories, and as a result, industrial water withdrawal per unit of output dropped by 12.49 percent between 2001 and 2008. Other Chinese provinces should consider similar approaches in order to rein in industrial thirst and more efficiently utilize existing water resources.

Most areas in China also experienced an increase in domestic withdrawals, mainly due to population growth and improved standards of living. In catchments with increased domestic water withdrawal, more than 80 percent saw an increase in domestic water withdrawal per capita. With income growth, more families can afford household appliances like dishwashers and washing machines, and live a higher-consumption lifestyle. For example, the number of washing machines per 100 households increased from 90.5 to 96.92 during the 10-year period studied. The number of shower water heaters per 100 households increased from 49.10 to 84.82.

The drivers of the decrease included both policy prescriptions and deployment of water-efficient farming equipment. In China’s Five-Year Plan for 2006-2010, the government set a goal of stabilizing irrigation water use by 2010.  Land areas equipped with water-saving irrigation technologies increased by 40 percent from 2003 to 2010.

Moving Toward a Water-Secure Future

Worsening water stress is already a cause for concern in China, and the threat is growing. Water stress in Ningxia Province, for example, is projected to increase by 40-70 percent by 2040 due to climate change’s effect on available surface water and the influence of socioeconomic factors.

China has already seen how strong water policies can lead to a decrease in water stress in the agricultural sector. Depending on each catchment’s unique water use and water stress situation, government and corporate policies can support more efficient and sustainable water use by: encouraging cultivation of less water-intensive crops; improving water-use efficiency in water-intensive industries like coal mining and electric power production; and promoting more water-conserving lifestyles amongst consumers. China may be facing mounting water threats, but it can start reversing course with the right policies and management practices.