Ningxia is one of the most water-stressed regions in China, with per capita water resources just 30 percent of the national average and over 70 percent of the land subjected to high to extremely high water stress, according to WRI’s Aqueduct Water Risk Atlas (see Figure 1). Although Ningxia is one of the smallest provinces in China, it is home to one of China’s largest coal bases, Ningdong Energy and Chemical Industry Base (“Ningdong base” below). Coal production and power generation has driven Ningxia’s economy over the past decade. However, as an extremely thirsty industry, coal has put more stress on the area’s water supply and heightened competition with other users, including farms and households.

A WRI working paper recommends developing a coordinated system to ensure sustainable development of water and economy in Ningxia. 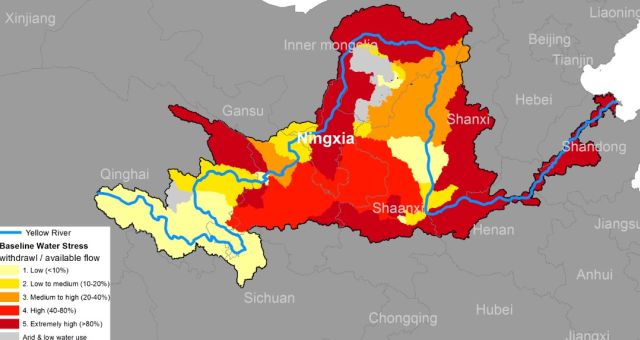 Coal Drives Ningxia’s GDP – and Puts Its Water at Risk

Ningxia’s coal industry made up about 50 percent of total industrial production in 2012 and helped drive a tripling of GDP per capita between 2005 and 2012.

However, such rapid coal development exacerbated water stress. By the end of 2012, 91.5 percent of installed power capacity of Ningxia’s coal fired power plants was in areas with acute water shortage (see Figure 2). Even though power plants using air cooling technologies, which help to reduce water consumption, accounted for 62.8 percent of the total installed capacity, new planned coal-fired power plants will still increase water demand (see Figure 2). Estimated by WRI, water consumption will rise 1.5 times by 2015 and double by 2020 compared to 2010 levels if coal fired power generation targets are met at the Ningdong base. 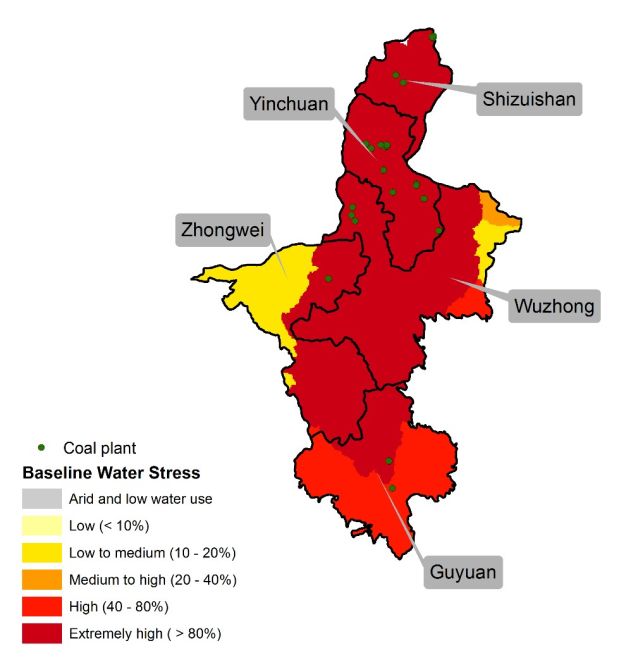 Ningxia has 5 prefecture-level cities: Yinchuan, Shizuishan, Zhongwei, Wuzhong and Guyuan which are shown in Figure 2.

Ningxia provincial governments has adopted policy and economic measures to meet the coal industry’s demand for water, including water conservation, water rights transfer and water pricing measures. Increased investment in water-saving technologies cut Ningxia’s water consumption per 10,000 yuan of GDP by 77 percent and industrial water consumption per 10,000 yuan industrial value added by 68 percent from 2004 to 2012. During the same period, about 88 million cubic meters of water were transferred to nine coal projects through water right transfers.

However, these measures’ effectiveness can be further improved, especially through investments the efficiency of agricultural water use. Agriculture accounts for 90 percent of Ningxia’s total water withdrawal, most of it flood irrigation, but the agricultural water use efficiency is 6 percent lower than even the national average. The government has proposed transferring water from agriculture to coal production, but it is only possible in a limited way given the existing infrastructure of canals. At the same time, funding is limited and farmers are not able to move to water-saving farming methods without additional resources.

Meanwhile, Ningxia’s current water rates and water resources fees are too low to reflect the real value of water, weakening incentives to conserve this vital resource. In addition, current policies treat water and energy as separate elements in Ningxia, not recognizing that they are inextricably linked.

To ensure sustainable development of the coal sector and water resources in Ningxia, WRI’s analysis recommends: