To maintain its economic growth and provide for its massive population, China must reconcile two powerful, converging trends: energy demand and resource scarcity. One prime example of this tension is the country’s coal use and water supply.

According to a new WRI analysis, more than half of China’s proposed coal-fired power plants are slated to be built in areas of high or extremely high water stress. If these plants are built, they could further strain already-scarce resources, threatening water security for China’s farms, other industries, and communities.

As of July 2012, China’s government planned 363 coal-fired power plants for construction across China, with a combined generating capacity exceeding 557 gigawatts (for reference, installed capacity at the end of 2012 was 758 GW). This amounts to an almost 75 percent increase in coal-fired generating capacity. China already ranks as world’s largest coal consumer, accounting for almost 50 percent of global coal use. 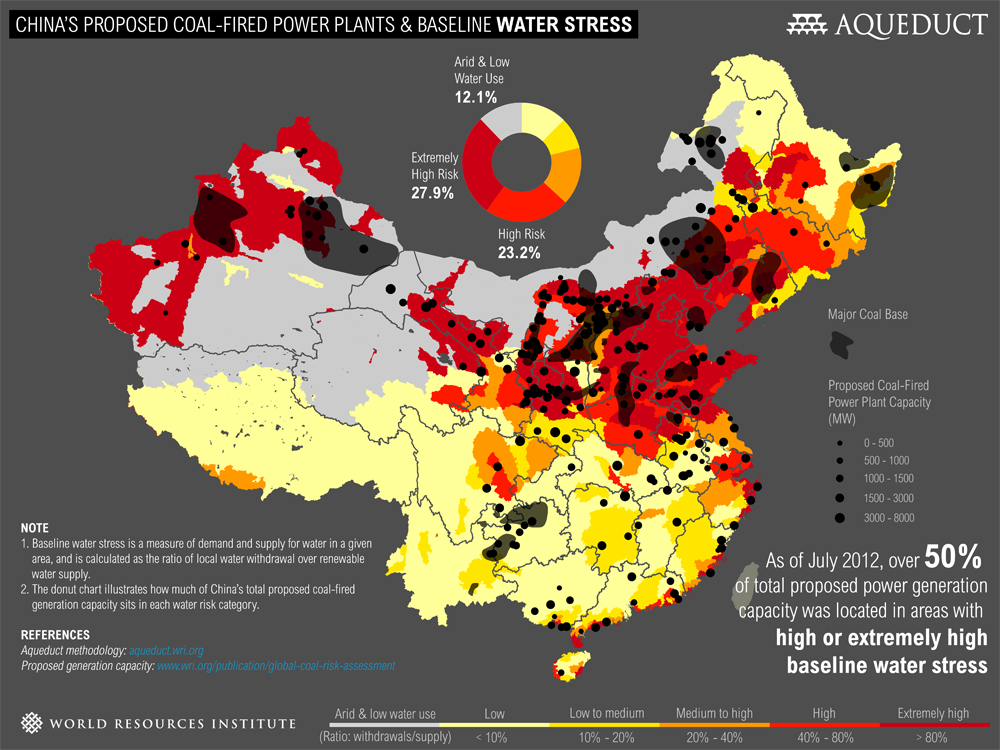 Using WRI’s Aqueduct Water Risk Atlas, we overlaid the locations of these proposed coal plants on our water stress maps for China. We found that 51 percent of China’s new coal-fired power plants would be built in areas of high or extremely high water stress.

Water stress is the ratio of total water withdrawals to available renewable supply in an area. In high-risk areas, 40 percent or more of the available supply is withdrawn every year. In extremely high-risk areas, that number goes up to 80 percent or higher. A higher percentage means more water users are competing for limited supplies. See the high and extremely high-risk areas highlighted in red and dark red on the maps. For more detailed information, please see Aqueduct’s Global Maps 2.0 metadata document.

This finding is especially troubling because coal-related industries—mining production, coal-to-chemical, and power generation—are extremely water-intensive. Coal mines depend on water to extract, wash, and process the coal, while coal-burning power plants need water to create steam and cool generating systems. If all of the proposed plants are built, the coal industry--including mining, chemical production, and power generation--could withdraw as much as 10 billion cubic meters of water annually by 2015. That’s more than one-quarter of the water available for withdrawal every year from the Yellow River.

Other major takeaways from our analysis include: 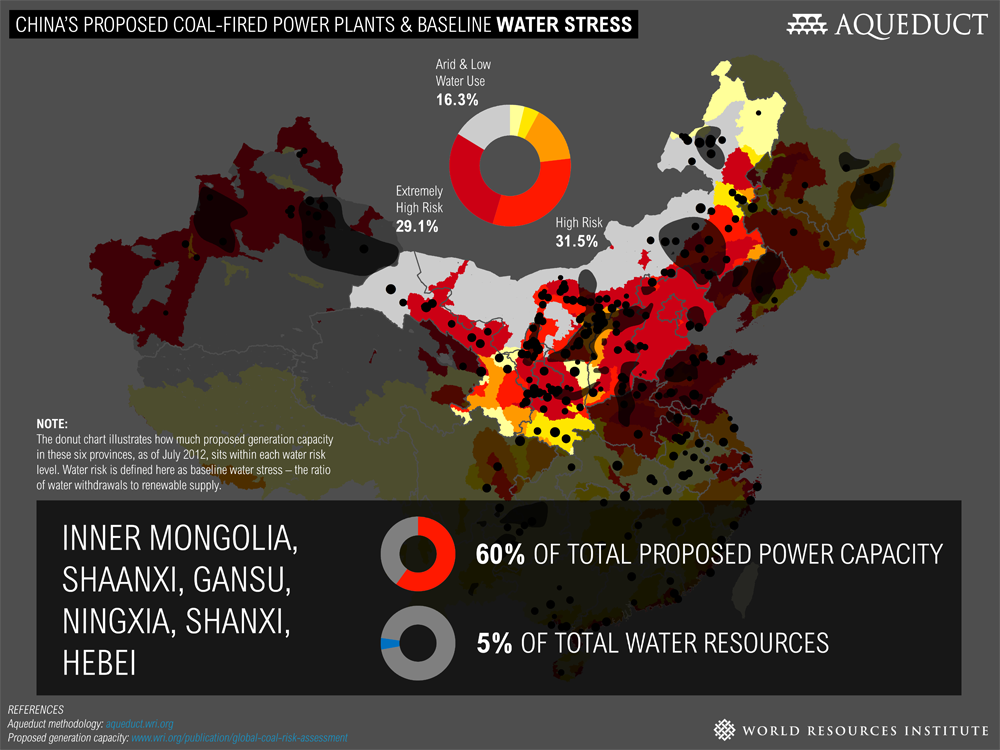 The Chinese government has also outlined three national goals for water, called the “Three Red Lines.” These “lines” aim to cap annual maximum water use at 700 billion cubic meters (about 25 percent of annual available supply, increase irrigation use efficiency to 60 percent by 2030, and protect water quality to maximize sustainable development.

Those quantity, efficiency, and quality targets are an important first step toward addressing the water-energy trade-off at the heart of China’s coal development, but it’s important that the country go further. To meet its water cap targets, China needs to it slow down coal development and introduce a combination of significant water saving and efficiency programs into the coal industry.

How China responds to its coal conundrum will impact not only the country’s water supply, but its farms, ecosystems, other industries, and communities. Will it build out the proposed coal-fired generating capacity without major technology upgrades and exceed water red line targets? Or will it carefully manage water resources and potentially limit coal capacity? Prioritizing water resource management in its decision-making will better position China to balance its competing economic and resource demands.